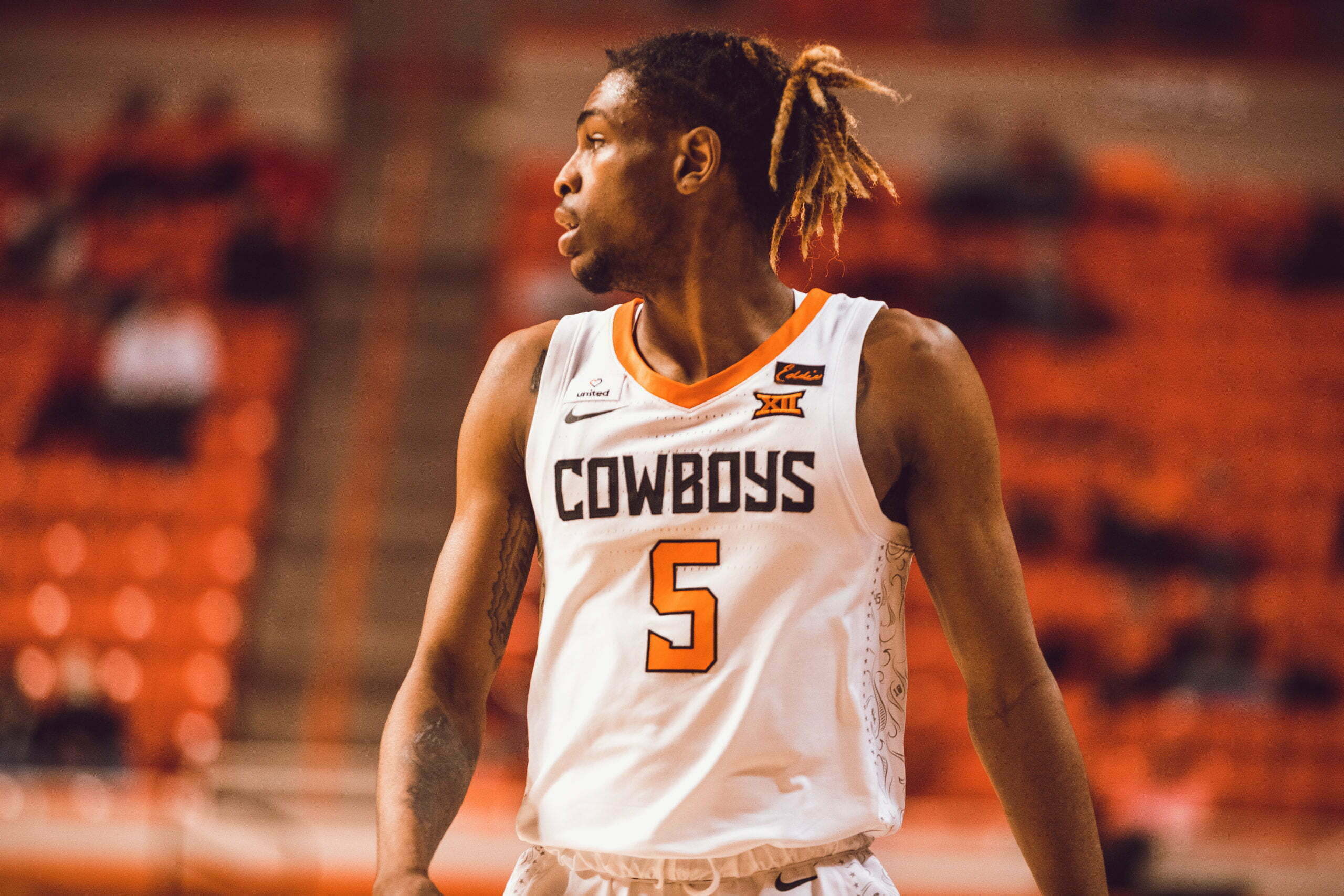 Oklahoma State looked ready to post a true blowout win just moments into the final frame when a 16-0 Kansas State run shrank the Cowboys’ 20-point lead to a two-possession affair.

The Cowboys finally stopped the bleeding long enough to hold the Wildcats at bay and move to 13-6 (6-6 in conference).

Here are five thoughts on the Cowboys’ Valentine’s Eve win starting with another second-half slump.

This may not stick out as the type of CADE game we point back to when No. 2 makes his fourth-straight NBA All-Star team, but it might be Kansas State’s last time to D him up. So Cade obliged Wildcats fans and gave them something to remember him by.

After turning in a forgettable (and still career-low) five points in Manhattan on Jan. 9, Cunningham left his mark on Kansas State in possibly his final matchup with former Team USA coach Bruce Weber.

Cade, again, started slow with just 3 first-half points as the Wildcats loaded up on him, but he made the right plays and impressed with dimes like this.

Then, when he needed to, the freshman phenom put on his cape and led the Pokes to victory.

Rondel Walker played a career-high 36 minutes in his first ever start and he filled them with his trademark energy.

Normally the Cowboys’ spark plug off the bench, Walker got the nod in place of Isaac Likekele who was available but is nursing a lingering foot injury.

And Walker brought the same intensity on both sides of the court that we’ve become accustomed to chipping in 10 points and matching a career-high three steals. He’s had multiple takeaways in three consecutive games.

Here was my favorite.

If I allow myself to look past this season, a backcourt that includes Rondel Walker and Avery Anderson looks pretty salty over the next 2-3 years.

3. Cowboys Need to Learn to Keep Their Boots on the Gas

OSU, again, allowed a team to go on a big second-half run, and this one was abominable.

After going up 20 just a moments into the second half, the Cowboys watched that lead dissipate. The worst offense in the Big 12 made six-straight baskets as part of a 16-0 run over just four minutes.

OSU was able to overcome it — and might be able to weather such a run against Iowa State on Tuesday — but those are the issues that will lose the Cowboys big games down the stretch of the season and in March.

Another bugaboo that could hamper the Cowboys’ chances come March, is their propensity to be careless with the ball.

OSU came in averaging a conference-worst 15.5 turnovers per game, and was able to increase its lead with 17 more giveaways on Saturday. What’s worse, K-State only averaged 12.3 takeaways coming in (ninth in the Big 12). And those 17 turnovers became 27 K-State points.

When you’re as young and play as fast as OSU does, TOs are going to happen, but if the Pokes can figure out a way to limit the unforced errors and head-scratchers this team has a much higher ceiling.

The Cowboys will follow up a win over a one-win (in conference) K-State team with a winless Iowa State team, but it gets much tougher after that. (By the way, the Cyclones are tied with Kansas at the half as of the time of this typing.)

Tuesday is the last time this season that OSU is favored, according to KenPom, so it will be crucial for OSU to try to figure some of these shortcomings out and get healthy before next weekend.

Starting with a trip to No. 2 Baylor on Feb. 20, OSU will play its final four games against ranked teams with No. 7 Texas Tech coming to town on the following Monday and consecutive Bedlam matchups against No. 12 OU.

• Unleash Kouma: In just eight minutes, Bernard Kouma made one shot, grabbed one board and committed two fouls. But allow me to cherry-pick a stat just so that I can show you as clunky an and-1 as you may see all season. The sophomore big led the Cowboys with an offensive rating of 105.3.

• The Wildcats lost their 12th-straight game on Saturday in GIA, a new program record. When the Wildcats host the Jawhawks on Wednesday it will have been 50 days since they tasted victory.