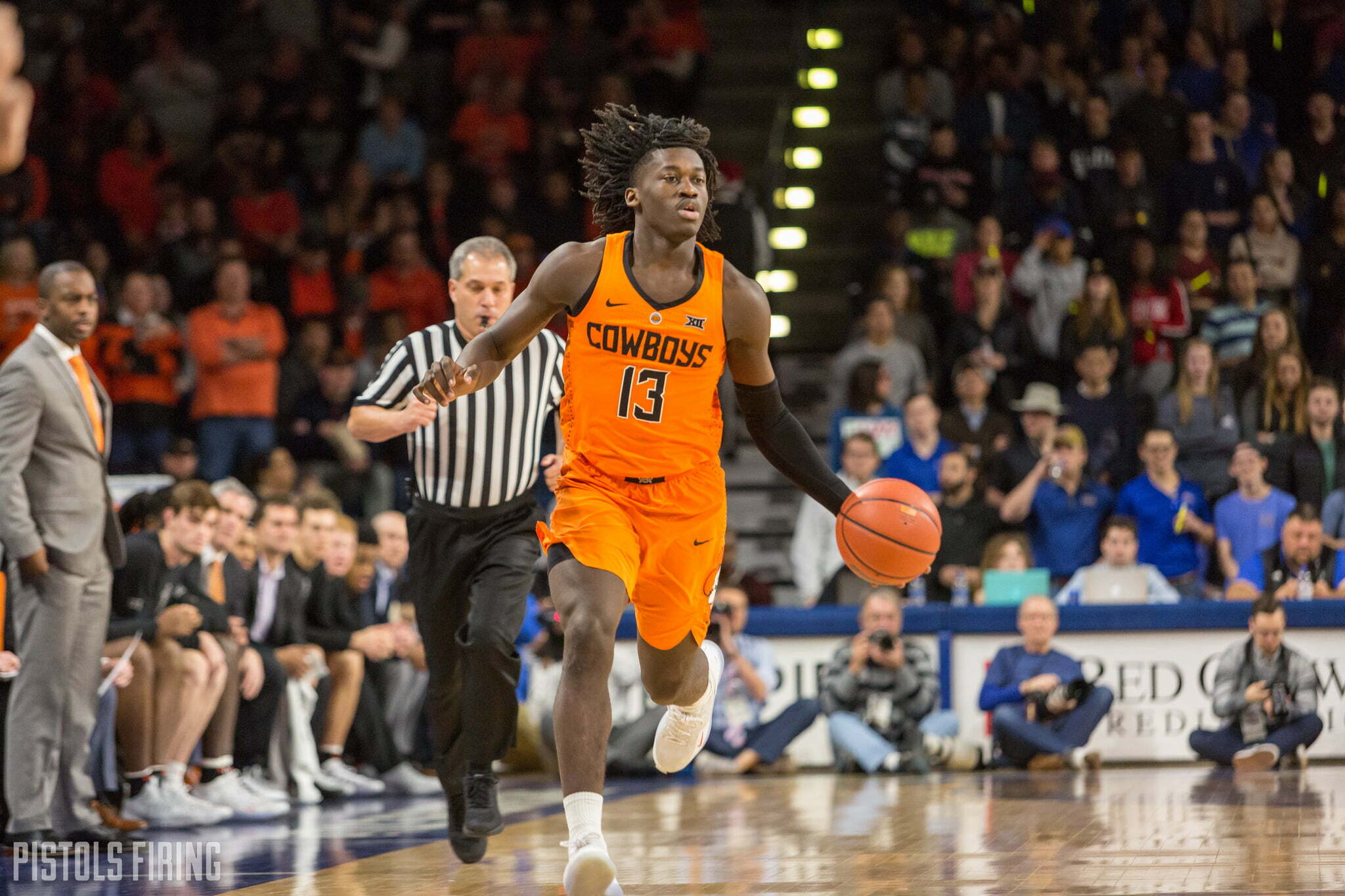 After a pair of close calls, the Cowboys got a deserved upset win.

The Oklahoma State basketball team defeated Baylor 67-64 on Wednesday in Waco, marking the Cowboys’ fourth conference victory this season. Here are five thoughts on a team that continues to not die.

1. Putting It on Ice

Isaac Likekele was a bully.

Likekele, OSU’s freshman point guard, tied a career-high 23 points off 10-for-15 (67 percent) shooting. He also tied a career high with nine rebounds to go with six assists. His plus-seven was also a game high.

From 8:49 to 4:47 in the second half, Likekele scored 10 of OSU’s 12 points. He didn’t score many finesse points Wednesday night. He relentlessly attacked the goal scoring bucket after bucket at the rim.

OSU shot 17 percent from 3 tonight, something that would result in an OSU loss many more times than not, but Likekele made it to where a 3-point shooting team didn’t need the 3.

At 6-foot-4, Likekele’s bigger than most point guards he’ll face in his collegiate career. Then add that his arms are disproportionately long, and he is an absolute nightmare for an average-sized point guard to match up with near the rim, something OSU coach Mike Boynton took advantage of.

It wasn’t just that Likekele finished strong. He kept the Cowboys in it in an ugly first half from both teams. At the break Likekele had 10 points, five rebounds and four assists.

2. Yor Anei Swats His Way Deeper into the Record Books

Anei stuffed six shots Wednesday, tying a career high and an OSU freshman high. He is up to 70 this season. That ties Bryant Reeves’ junior season for the third most in a season in school history. Seventy blocks also puts Anei 16th on OSU’s career blocks list in only his first school year.

In particular tonight, Anei seemed to have a lot of fun when the Bears tried to get out in transition.

On top of blocking everything in a 7-foot radius, Anei totaled 14 points and nine rebounds. He scored OSU’s final four points to thwart any late comeback attempt.

The OSU freshmen tandem were the best two players on the court Wednesday night, which is remarkable given where the Cowboys are at right now.

• Lindy Waters was limited in practice this week and played with a sleeve over his calf.
• Thomas Dziagwa took a hard fall in practice Tuesday, which resulted in a banged up elbow. He wore a sleeve over it in the first couple of minutes before taking it off.
• Cam McGriff is a robot, but even he needs his oil changed, as Boynton’s been on record saying he knows McGriff isn’t fully healthy, McGriff just won’t admit it.
• Isaac Likekele had KT tape wrapped all around his knee. Nothing major has been made about that, but I doubt the tape is there for no reason.
• Luke Major stayed in Stillwater with a concussion.

The Cowboys are already undermanned to begin with, and four of those five listed played at least 32 minutes Wednesday. And they won. None of this adds up.

After this season is over, these guys are going to need wheelchairs that double as ice baths.

It’s getting cliche at this point to say they have every reason to give up, but they do. To get to play beyond next week, the Cowboys are going to need to win four games in the Big 12 Tournament. It’s taken them 17 games to get four wins in the Big 12 regular season. It comes down to pride, and the Pokes are proud.

Feb. 9, 2015 was the last time the Cowboys beat Baylor on a basketball court. That was the season before Travis Ford left.

There were seven OSU losses between then and now, but somehow a 10-19 (now 11-19) OSU team decided to end that streak.

The win means in two seasons Mike Boynton has defeated eight of nine Big 12 opponents at least once, only lacking Kansas State. Given how tough top to bottom this Big 12 has been in these two seasons, that’s quite impressive.

It all comes down to Saturday in Stillwater: A game between OSU and West Virginia to not get 10th place.

A win and OSU enters the Big 12 Tournament as the nine seed with a first-round game against TCU. A loss puts the Cowboys in the predicted 10th slot where they would play Oklahoma in the first round.

West Virginia tallied an upset Wednesday as well, thumping Iowa State 90-75 in Morgantown. The Cowboys won in their first meeting this season against West Virginia 85-77. Like Wednesday, Isaac Likekele was the story of that game, scoring 23 points and ripping down nine boards.

The Cowboys have been prideful in this stretch of meaningless games. Now there is something to play for in A. Nobody wants to get last. B. TCU is struggling and the Cowboys have already beaten the Horned Frogs this year, and OU has beaten OSU twice. The Sooners also beat Kansas on Tuesday.