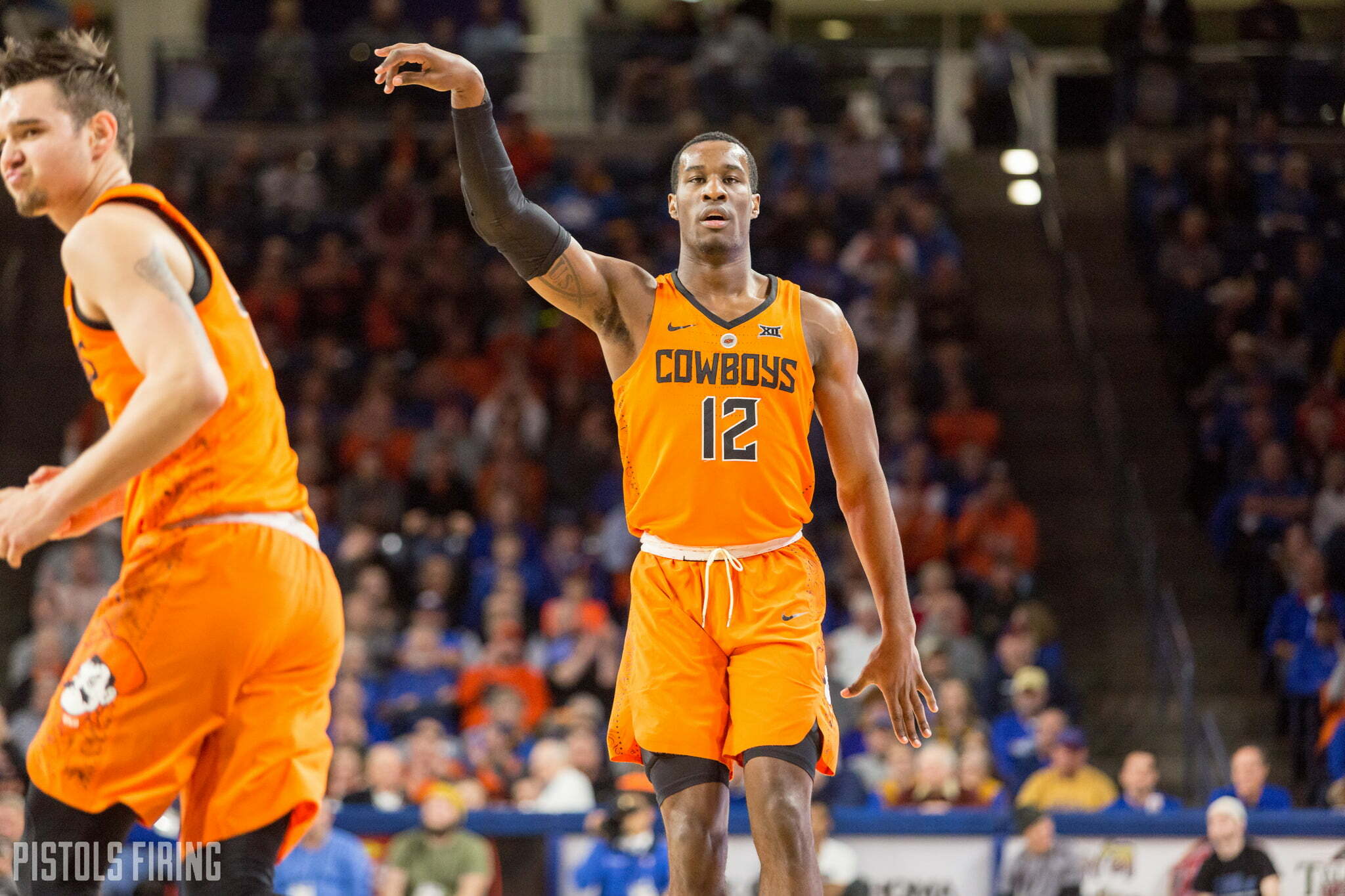 Considering the Cowboys have nine players on it’s roster who have never played in a Big 12 game, Wednesday went about as well as expected.

Oklahoma State fell to Iowa State 69-63 in Gallagher-Iba Arena in a game that saw 56 3-pointers be shot. Four Cyclones combined for 61 points Cameron McGriff and Lindy Waters split 30 of the Cowboys’ points.

The Cowboys hung around and actually led 36-35 at halftime, but OSU led for only five minutes in the game. The Cowboys defense looked good, holding ISU to 36-percent shooting, but there are definitely some things the Pokes need to improve to be better than the 10th place they were projected. Here are some thoughts.

1. McGriff Is Doing All He Can

Whenever this team gets a few more things figured out, Cameron McGriff is going to be an even bigger problem than he already is.

McGriff finished with his fourth double-double of the season, with a final line of 15 points, 13 rebounds, five assists, three steals and a block. He also played 38 of the game’s 40 minutes. At halftime, McGriff had nine boards.

His workload might seem a little concerning, but he is in scary good shape. OSU coach Mike Boynton doesn’t have too much of a choice, as McGriff is the only non-freshman big the Cowboys have. The Cowboys are without Kentrevious Jones, who is still sitting because for disciplinary reasons, and Maurice Calloo and Duncan Demuth combined for nine minutes, two points, zero rebounds and two fouls. So, as far as true post players go, it’s McGriff and Yor Anei.

Of this game’s 132 points scored, 84 came from either 3s or free throws, meaning only 48 points came from 2-point baskets. Excuse me, but where are we at in society?

I’m not saying I’m against it, but it was weird to see how bad both these teams were inside the 3-point line. The Cowboys were officially 8-of-24 on layups while being 8-for-26 from 3. Meanwhile, the Cyclones didn’t even bother, shooting fewer 2-point shots than 3-pointers.

If it works, it works.

The game was closer than it probably should’ve been.

Marial Shayok entered Wednesday’s game averaging 20 points a game. He still got 17 against OSU, but he did so on 4-for-17 shooting. A lot of the time, Shayok was open in the corner but would miss a 3, as he went 3-for-11 from deep.

4. Cowboys Getting Better at Small Things

That’s not to say the Cowboys didn’t belong in the game because they also made a lot of their own luck.

OSU outrebounded Iowa State 41-37, and the Pokes shot a slightly better free-throw percentage but did shoot 11 fewer free throws. You can’t say this young team isn’t playing hard. The Cowboys defense is going to steal them a few games in league play. Although there were a few open misses, OSU still held the Cyclones to a 36.4 field goal percentage, which trailed the Cowboys’ 37.9 percent, but when a team makes eight more free throws and two more 3s, it’s going to be tough to win.

Things young teams are going to do: miss free throws and turn the ball over. The Cowboys’ free-throw percentage is improving, so we’ll see if the turnovers can follow suit.

When OSU got caught in the half-court Wednesday, there were a lot of contested jumpers late in the shot clock.

The Cowboys are a team designed to get out, run the floor and get a shot up early in the shot clock. Like what Iowa State did, as the Cyclones outscored OSU 22-3 in fast-break points.

There were times under three minutes, when OSU wasn’t getting a shot up until there was under 10 seconds left on the shot clock (while trailing) because nothing was moving.

It broke down to where the best the Cowboys could do in the half court was isolate Michael Weathers. It worked for a second:

Then Weathers was unable to get some contested layups to go and the Cowboys went back to struggling through some offensive sets and putting up more contested jumpers. The Cyclones are a good defensive team. They rank 40th in KenPom’s adjusted defensive efficiency, but the Cowboys are going to have to figure something out because there is a lot of tough defense played in the Big 12.

This is sustainable offense:

Next Up: The Cowboys head to Norman for Round 1 of Bedlam on Saturday, January 5 at 1 p.m.