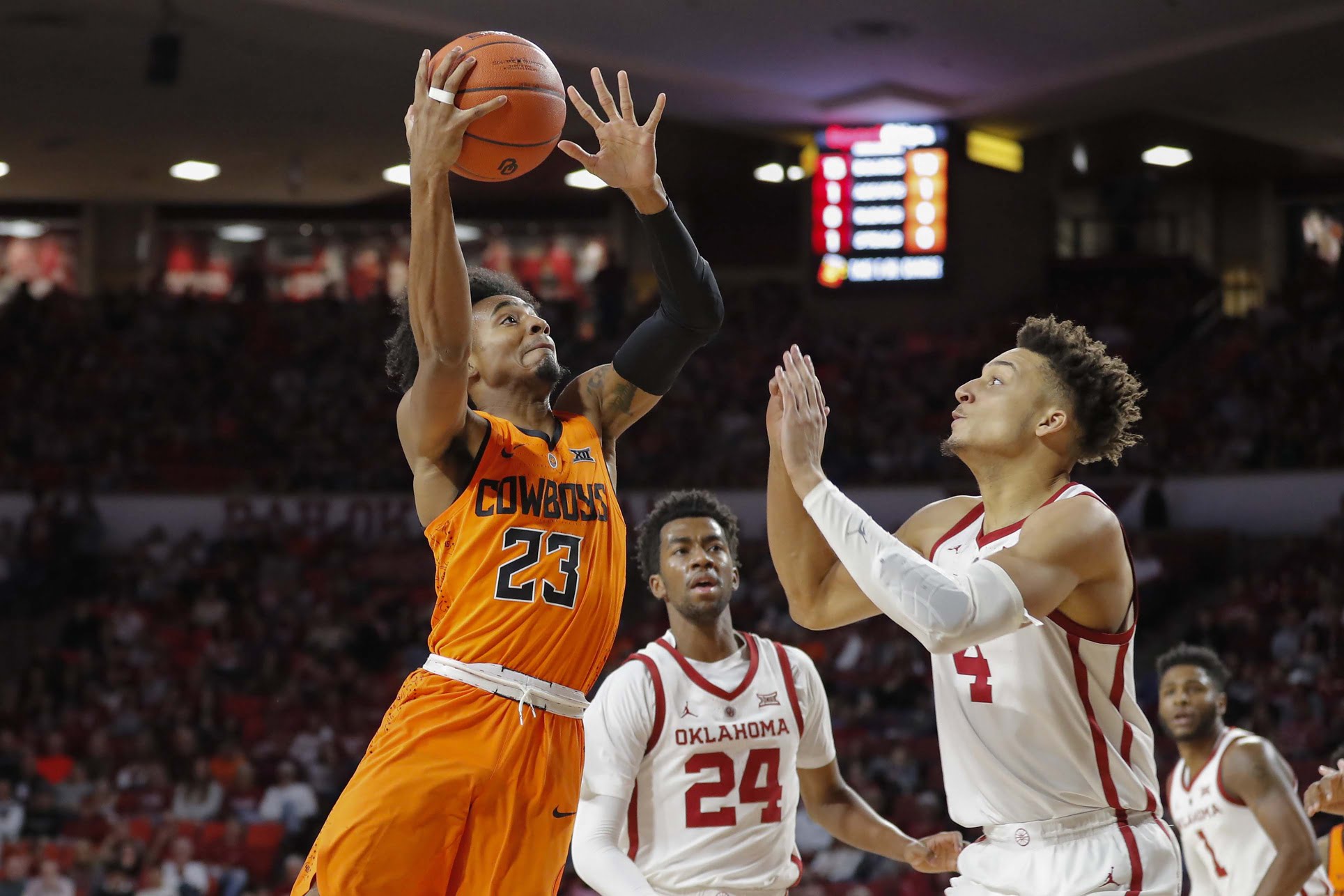 Oklahoma State fell to its rival Sooners 74-64 on Saturday at the Lloyd Noble Center. It was the Cowboys first Big 12 road game of the season.

OU’s Kristian Doolittle and OSU’s Thomas Dziagwa each scored 16 points, both team highs. Free throws were aplenty, which we’ll get to, as the Sooners scored 25 points from the foul line.

The Cowboys (6-8 overall, 0-2 Big 12) were within a few possessions for most of the game despite having three starters in foul trouble early, but the Sooners (12-2, 1-1) were able to put the Pokes away late. With that said, here are five thoughts from OSU’s eighth loss of the season.

1. Everyone is in Foul Trouble

In their first two conference games the Cowboys have been called for 46 personal fouls.

Fouling is something young team’s do, but when OSU’s veterans are also getting in foul trouble as was the case Saturday, it puts even more of the Cowboys’ inexperience on display.

OSU coach Mike Boynton took a risk keeping Waters in with two fouls in the first half, and it didn’t quite pay off. Waters finished the frame With zero points and two rebounds in his six minutes. He didn’t start the second half because Boynton said he knew OU coach Lon Kruger would’ve went at him early.

“He can’t put himself in that position in that moment and that’s part of the reason I didn’t start him in the second half because I knew, coach is a good coach, it was a closely called game,” Boynton said. “There were a lot of fouls called. So I knew they’d probably go right at him, I knew they had the ball first. I didn’t want to risk him picking up his fourth as early where we could get him through the rest of the game. But not having him on the court was kind of a blow to us just because he brings some peace in the ball handling aspect and obviously from an experience standpoint.”

Waters’ played 15 minutes in the second half, where he scored seven points, something the Cowboys could’ve used throughout.

The Cowboys missed shots in Bedlam, but as a whole, they looked better on the offensive end.

They flowed more seamlessly into their half-court sets instead of dribbling around until the end of the shot clock and chunking up a contested jumper. A lot of the offensive burden went to Michael Weathers, who we’ll get to, but OSU was able to play inside out on Weathers’ drives and kick for a shot or have a dump pass to a post man.

The Cowboys are a better shooting team than they showed against Oklahoma. It’s not often Cameron McGriff and Curtis Jones will go a combined 4-for-20 from the field. OSU still struggled at the rim, making nine of its 21 layup attempts.

For only the sixth time this season, OSU finished with more assists than turnovers. It still wasn’t great, but OSU players at least seemed more confident in what they were doing compared to just a few nights ago.

Even when Isaac Likekele was deemed no longer in foul trouble, Boynton stuck with Michael Weathers at point guard because of how well Weathers was playing.

Weathers, a redshirt sophomore, scored 13 points to go with his seven rebounds and six assists in a season-high 34 minutes. Isaac Likekele played six minutes. He scored two points and was minus-13 in that time.

“(Weathers) was playing better,” Boynton said. “Ice just didn’t have it. Didn’t have his juice that he needed. He seemed out of rhythm. He obviously sat for awhile, really the first time trying to get him back going again after sitting for a long time. All those type of things are learning processes for him. We’ll get back and I’m sure he’ll be in the film room trying to figure out what happened and why it happened and how to be better next time.”

It was a nice night for Weathers. He got to the bucket at will, but he struggled finishing, making three of his 12 field-goal attempts. As mentioned earlier, the Cowboys were 9-for-21 on layup attempts, and many of those misses came from Weathers. Most of his attempts were contested, but many still should’ve fallen.

“There’s a lot of big bodies on there, that’s what’s expected in the Big 12, a lot of strong guys,” Weathers said. “I just have to get back on the gym and just work on that.”

Here are a few clips of what he can do. He just isn’t as consistent as needed, yet.

Him getting to the bucket and finishing will continue to enable his playmaking with dishes like this:

Calloo scored eight points, seven of which came in the first half, in 17 minutes. He was also the only OSU player positive in plus/minus at plus-6.

“I’m seeing a lot of growth from Mo,” Weathers said. “Just his renewed spirit that he has and his focus and practice came a long way. I think that’s why he’s starting to get more and more minutes on the floor.”

Calloo has a high ceiling, but came in with a bit of a low floor. In the past few games, he has raised that substantially with plays such as this:

5. Getting Over the Hump

In the postgame news conference, Thomas Dziagwa dropped this nugget:

“Youth is not an excuse anymore,” he said. “We played enough ball games. I think it’s just coming down to our really digging in and competing and everyone doing their job. Here going forward, we’re at a crossroad where we either have to choose to stay focused on everything or not. We just gotta keep going, continuing doing our job and going to practice and keep getting better.”

There has been a lot said about OSU’s having six true freshmen or their near-bottom team experience ranking, and it seems that the Cowboys are close to overcoming that.

This game was a bit of a microcosm of that. The Pokes were with OU blow for blow but couldn’t ever get ahead, as OSU lead for only 15 seconds Saturday. It was the groups first Big 12 road game in front of 9,687 fans who were not on their side. Any moral victory one could muster won’t count on OSU’s record, but the team is slowly getting better. They’re still just not there yet.

“I agree,” Boynton said. “Youth (isn’t) an excuse. You gotta play basketball. You put it on, and you’re either ready or you’re not. We just have to play better, it’s quite simple. We competed pretty hard. Our lack of discipline defensively at times was very, very disappointing.”