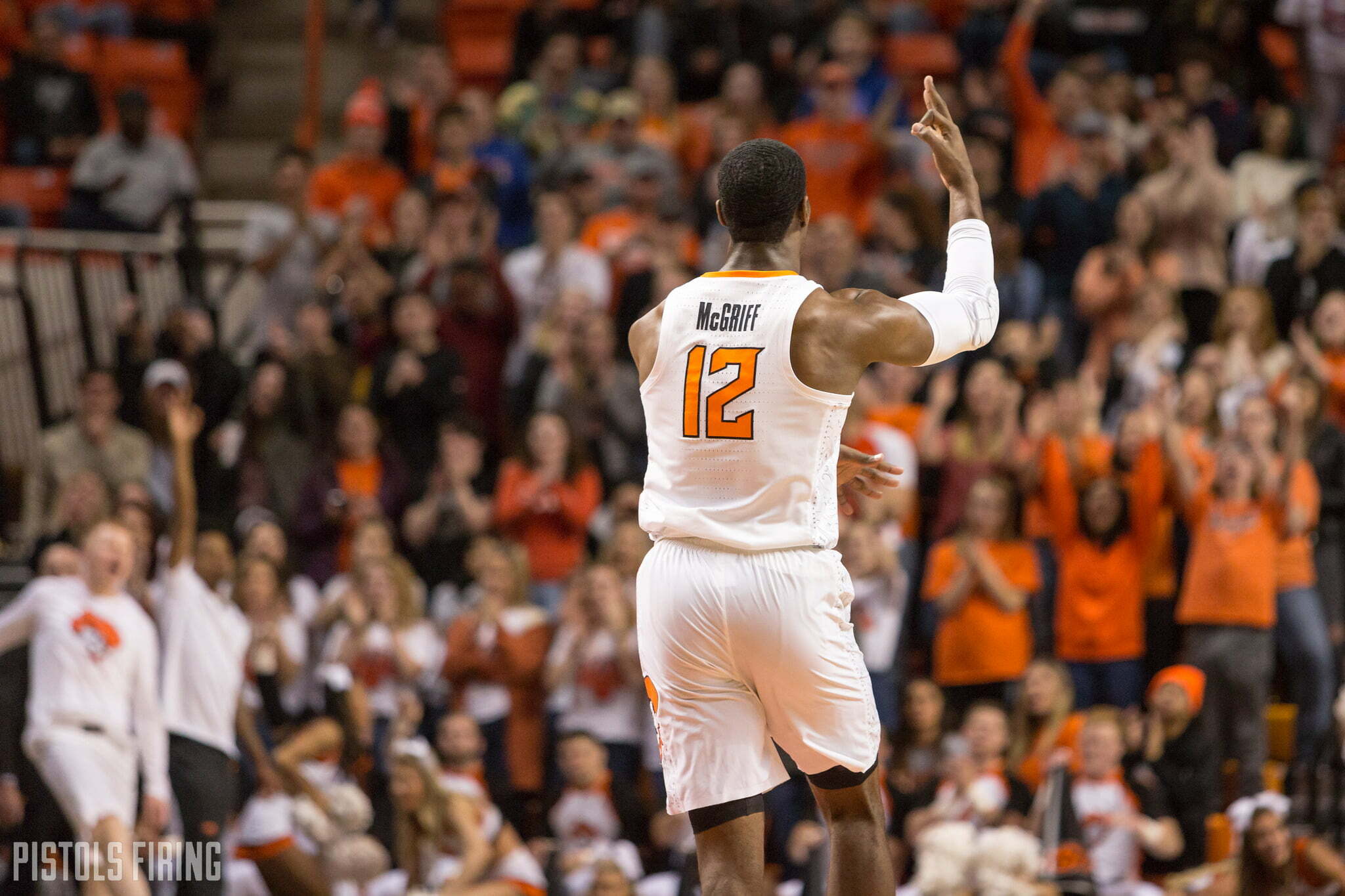 The Oklahoma State basketball team crushed No. 19 LSU 90-77 in the third-place game of the AdvoCare Invitational Friday.

The Tigers couldn’t keep up with OSU’s pace. OSU junior Cam McGriff looked like an NBA prospect, scoring a game-high 28 points, and the Cowboys rolled after a tough loss to tournament winner Villanova on Friday. Here’s what Boynton said in the locker room postgame.

Listen to what @thacoachmike had to say to the Cowboys after the win. #c2e #okstate pic.twitter.com/dGmRLc2odC

Here are some thoughts following the Cowboys’ big win.

McGriff was 10-for-15 from the field and a perfect 6-for-6 from the free-throw line. He dominated against LSU’s highly touted youngins and did wizardry like this.

You need more angles? Mark Cooper has more angles. Notice McGriff’s ankle snapping in half, but it not mattering to him any.

He has averaged about 17 points a game through OSU’s first 6. He has been the Cowboys’ leading scorer in half of their games and his team’s leading rebounder in all but one.

Here are some lines from three freshmen who played in this game:

Two of those players were five-star recruits; the other was Isaac Likekele. In the same order, here are each players’ recruiting profile.

Despite being by far the lowest-ranked coming out of high school of the three, Isaac Likekele was the best freshman on the floor Sunday. With McGriff’s scoring outburst, Isaac Likekele’s numbers got hidden, but his nine rebounds and eight assists were both season highs. His +28 was also a game high.

Not all of his plays were overly flashy, but dish was clean.

The frantic pace this game took was good for OSU.

The Cowboys halfcourt offense looked painful at times Sunday, but when LSU was missing shots and the Cowboys could get out running, everything looked great.

The Cowboys started the game on a 15-2 run. OSU went on a 12-0 run early in the second half and had another 9-0 run later in the game. The Cowboys are a team that scores in bunches. They run sprints not distance.

They were able to bail themselves out a few times with made shots in the halfcourt, Lindy Waters and Cameron McGriff were often the two who would iso after the offense broke down. I imagine the halfcourt offense will continue to come along as the season moves forward when the younger guys gain more experience.

4. Anei Back in the Starting Lineup

Freshman center Yor Anei started for the first time since the Cowboys win against UTSA on Nov. 14.

He scored eight points, had four rebounds and two blocks. However, he played only 19 minutes (a low for the game’s starters) because he committed four fouls.

#YorAneiBlockTracker2018 is up to 15. His 2.5 blocks per game would be tied for third with Joe Atkinson in an OSU season if Anei had played the 20 minimum games to qualify.

On the surface, he brings more to the lineup than Duncan Demuth, as Demuth attempted only two shots in the tournament, but every time the ball is on the floor for more than a dribble, Demuth is on top of it. I think Anei will be the guy going forward, but for now it could be a game-by-game deal on who matches up better.

The Cowboys are on pace for the 11th most 3-point makes in a season in school history.

OSU has dropped 46 triples in its opening six games. Thomas Dziagwa accounts for a team-high 22 of those. Dziagwa has 92 career 3-point makes, putting him just outside the Top 25 in school history, as Chad Alexander had 97 3s from 1994-98.

Dziagwa has made 59.5 percent of his 3-point attempts this year; Todd Christian holds OSU’s single-season record at 49.6 percent. Former OSU coach Sean Sutton is the school’s all-time leader in career 3-point percent at 44.4 percent, Dziagwa isn’t far off that at 42.4 percent.