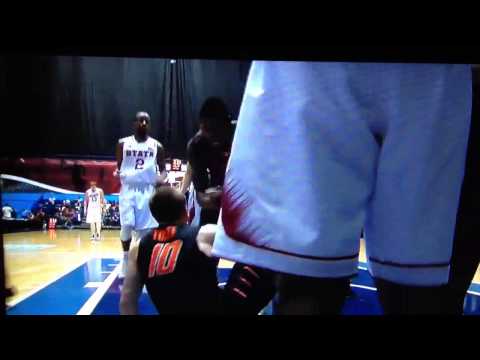 What a great win by the Cowboys, taking the Puerto Rico Tip-Off from #6 North Carolina State behind stellar performances by Marcus Smart and Le’Bryan Nash. Here are five thoughts about the Pokes’ big win…

1. Nolo and I agree on this — OSU might have outscored NC State by 20 but the reason is because of how fantastic they were on defense. The Wolfpack came in averaging 86 a game and they struggled to crack the 50-point mark.

3. According to KenPom’s rankings this was OSU’s biggest win since they took down Pitt in OKC in 2007 when they were ranked #13. NC State came into this game ranked #15 in his ratings.

And even bigger than that, they’re the ACC favorite, ranked ahead of Duke, ranked ahead of Carolina, and have the preseason favorite for ACC player of the year (CJ Leslie). It might not catch the attention of OSU fans because NC State isn’t a huge name like a Duke, but this is a massive win for Travis Ford.

4. If you watched the game, Dan Dakich said some absurd stuff (calling out NC State players for not handing out high fives) but I really thought he was spot on. He took chances, spoke his mind, and you could tell he really loves hoops. Wish more color guys were like that.

5. I kind of feel bad for Nash right now. Smart’s going to get the credit but he had 18-17-23 in the last three games of the tournament and went hard. He got to the middle of the lane against NC State’s zone D and really showed that he’s been working on using his ridiculous body to his advantage.

I am FIRED UP right now!