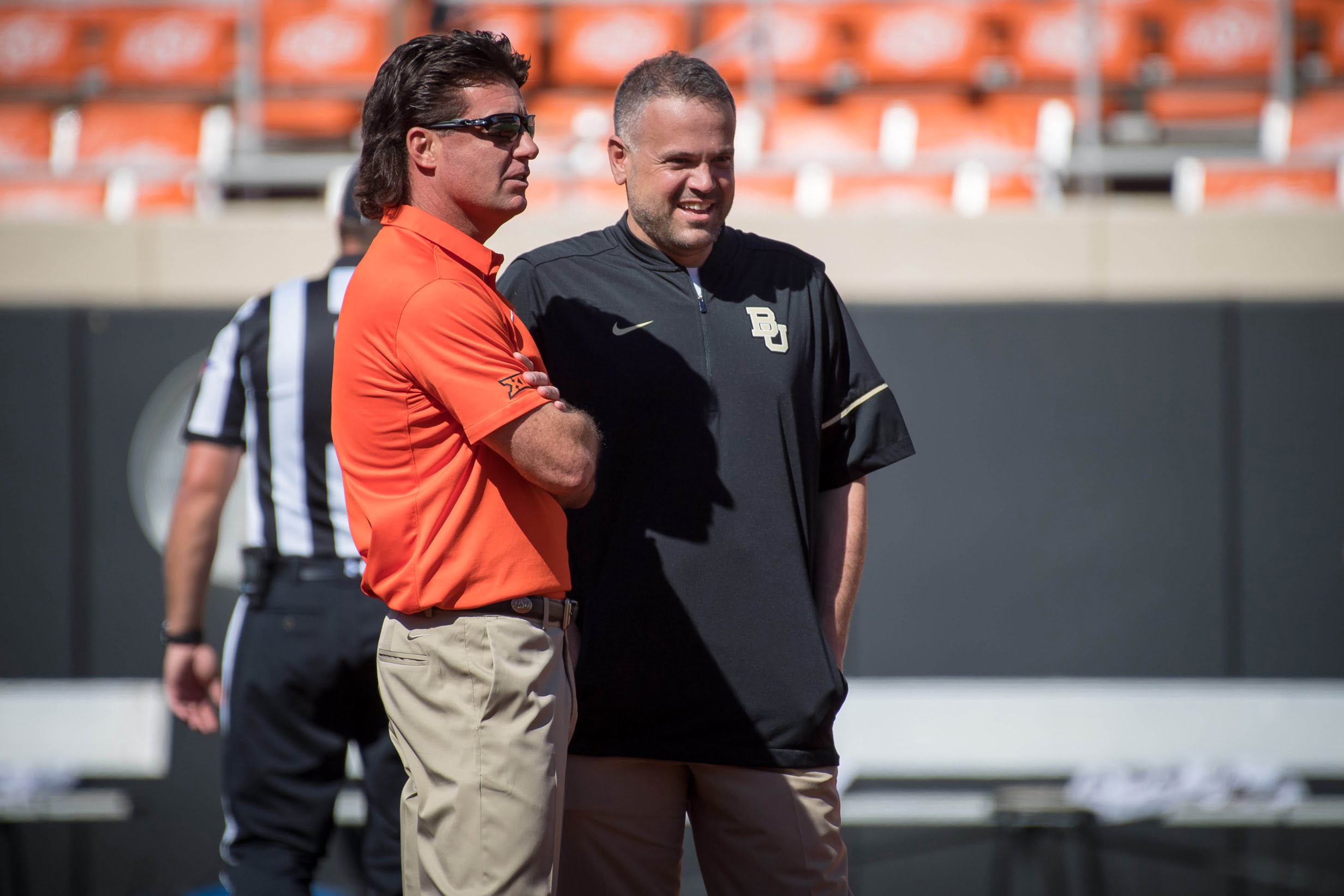 Last year at this time, Baylor’s football program looked destined to inhabit the Big 12’s basement for years to come. Now it’s one big season away from being closer to meteoric than mediocre.

Oklahoma State will end its bye week with a Homecoming matchup against the Bears in a game that should grab our attention for a handful of reasons. First and foremost is the fact that the last time they met OSU players, coaches and fans were left with a bad taste in their mouths.

By the time the Bears come to town, Mike Gundy’s squad will be smack dab in the middle of the longest revenge tour in the head coach’s 15-year tenure.

In succession, the Cowboys will face five teams that got the best of them the last go-round, from late September to early November, with a slate of Kansas State, Texas Tech, Baylor, Iowa State and TCU. That’s a month and a half straight of vengeance-fueled football.

In the spring, OSU players donned shirts listing the six Big 12 schools that beat them last year as a source of motivation.

While the prospect of marking names off your year-old hit list sounds romantic, one wonders if that can involve too much emotion. After all, it was a lack of discipline — namely a season-high 12 penalties and overall sloppy execution — that sunk the Cowboys’ ship in Waco, as well as in a couple of other head-scratching losses last season.

Motivation is good, execution is better. Hopefully this team has figured out how those two can co-exist and commingle. 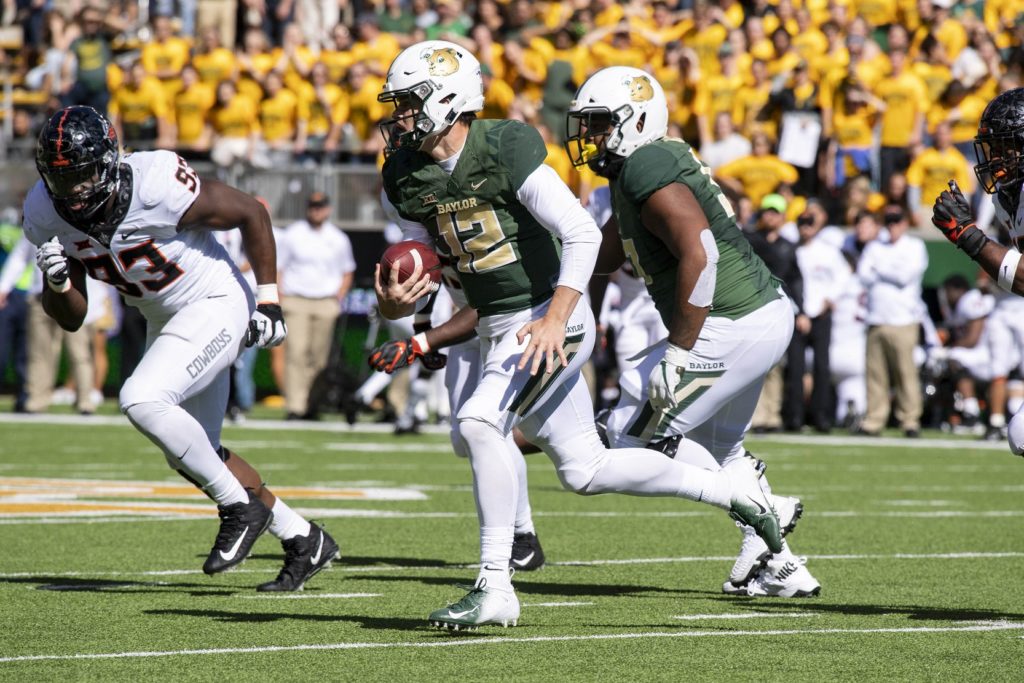 The Big 12 is brimming with young QB talent, and names like Brock Purdy and Alan Bowman seem ready to build off breakout rookie seasons. But maybe the most intriguing returning passer is Baylor’s Charlie Brewer.

Brewer burst onto the scene in 2017 slinging it for 1,562 yards, 11 touchdowns to seven interceptions — while completing 68.1 percent of his passes —  which earned him the Big 12’s Co-Offensive Freshman of the Year honors.

Then as sophomore Brewer mustered 3,019 yards, 19 TDs to nine INTs and added seven more scores on the ground despite dealing with injury and having to share snaps with transfer Jalan McLendon. Entering his junior season, it appears that the conference’s No. 2 returning passer (behind only Sam Ehlinger in career Big 12 passing yards) has been given the keys to the offense.

“I thought at the end of last year Charlie really settled into playing quarterback and not feeling like he had to do everything himself,” said Rhule. “I put Charlie in hard positions last year, making him rotate early in the year and that wasn’t easy on him.”

But Rhule said he liked what he saw from his QB late in the year “once the light bulb went off.”

Brewer totaled nearly 700 yards and five TDs to just two interceptions over his final two games, both wins over Texas Tech and Vanderbilt in the Texas Bowl. In the bowl game he also rushed it for a career-high 109 yards and a score. That’s some good momentum to take into the offseason.

But a lot will depend on this next question.

3. Can Baylor’s O-line Protect Him?

The Bears have allowed the most sacks in the Big 12 in each of the last two seasons — 39 last year and 38 the year before. That’s 2014 OSU territory when the Cowboys gave up 40 sacks. Only eight teams in the FBS allowed more QB takedowns than Baylor last season.

Now Baylor has to replace the entire right side of your O-line from a year ago. Right guard Blake Blackmar and right tackle Patrick Lawrence were fifth-year seniors who started all 13 games in 2018.

With its star QB and several playmakers returning, the line is the biggest question mark for the Bears’ offense in 2019, and could be the one thing that holds it back.

4. The Exception That Proves the Rhule

Programs aren’t supposed to bounce back this quickly.

In his first two years at Baylor, Matt Rhule has turned an 1-11 team into a 7-6 team with a Texas Bowl win. That’s a huge leap, or for Rhule, par for the course. In his first two seasons at Temple, his teams went 2-10 and 6-6 before rattling off back-to-back 10-win seasons.

The Bears probably won’t reach double-digits in 2019, but Rhule’s proven he can rebuild a program.

And Baylor’s schedule sets up nicely for a fast start and some built momentum with its only road games being at Rice and at K-State before its Week 7 trip to Stillwater. There’s a very realistic scenario where the Bears are 5-1 or, at worst, 4-2 when they face the Cowboys  — which probably puts them square in the Big 12 title hunt heading into Halloween.

That’s a team that had 70 scholarship players three years ago!

This is all hypothetical and I’m the fool gifting wins to a college football team in early August.

But if Baylor can finish in the top 3-4 of the league — and that’s a moderately-sized IF — it will not only frustrate a half dozen other fanbases, Rhule will have cemented himself among the top CEOs in a conference famous for its head-coaching prowess.