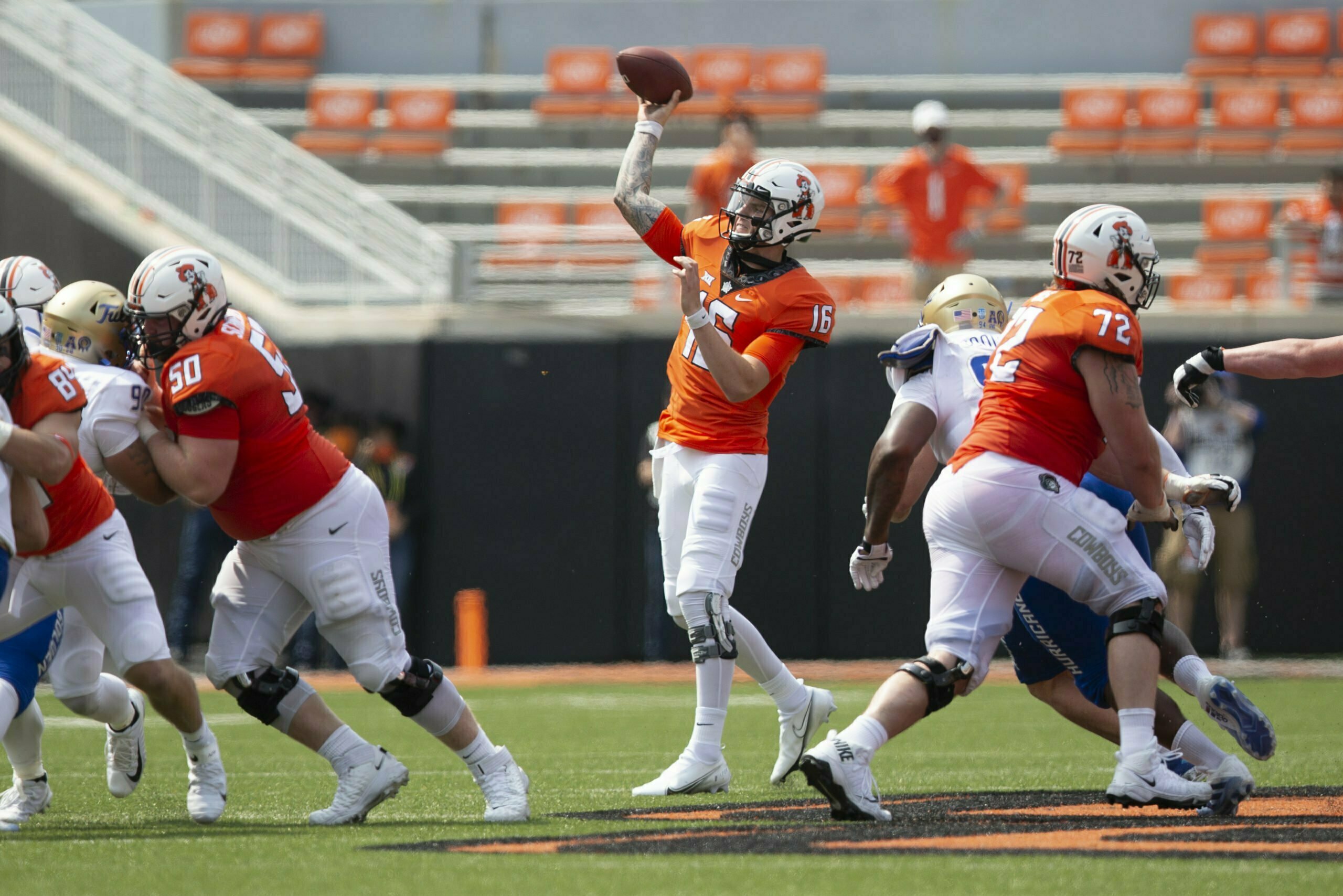 Game 1 was supposed to provide answers for the Cowboys, but they came out of it with maybe even more questions.

Oklahoma State hosts West Virginia to open Big 12 play Saturday, and as of writing, it’s still up in the air as to who will play quarterback for the Pokes after Spencer Sanders left the Tulsa game with a lower body injury.

Here is a preview of the Cowboys’ opening weekend of league play.

Piecing Together an Offensive Line

The flashy storyline heading into this game is whether Spencer Sanders will be available for the Pokes, but how well Charlie Dickey can piece together his offensive line might be a bigger factor in how this game plays out.

The Cowboys’ offensive line was the team’s biggest question mark heading into 2020, and injuries in Game 1 have only added more questions.

Starting right guard Cole Birmingham and starting right tackle Hunter Anthony each exited the Tulsa game with lower body injuries. Not much has been said about Anthony’s injury, but in the days that followed, OSU coach Mike Gundy said Birmingham’s injury seemed more significant than Sanders’.

“His was a little more serious,” Gundy said of Birmingham’s injury. “We’ll know about all of them because they all get put in boots, but his was more than what the quarterback’s was.”

The result of the “musical chairs” OSU had to play up front was Tulsa getting six sacks and holding Cowboy rushers to 2.8 yards a carry.

And that was Tulsa. West Virginia is still in rebuilding mode in Neal Brown’s second season, but the Mountaineers have some dudes up front, namely brothers Darius and Dante Stills. The two play on the interior.

Darius, the elder brother, was voted Preseason Big 12 Defensive Player of the Year. The two combined last season for 26 tackles for loss and 14 sacks. It’s not the ideal defensive line to run into with offensive line questions.

“[The Stills brothers] have a really high motor,” OSU running back LD Brown said this week. “They’re effort guys who are gonna get to the ball. We expect them to try to create chaos. It’ll be important for us to know where they are on the field because we know they can dominate a game on the interior.”

It will be interesting to see what that group looks like after a week of work.

The only college film West Virginia has on OSU freshman quarterback Shane Illingworth is a quarter where Illingworth threw just five passes.

Illingworth is now the Pokes’ presumptive QB2, and with injury questions about QB1 Spencer Sanders, WVU coach Neal Brown said he is having to go back to view some of Illingworth’s high school film.

“Anytime you come in and your first play from scrimmage, you throw a touch fade, which is as hard a throw there is in football, and he did it,” Brown said. “If he does play against us, I don’t think the moment will be too big for him. They had success with their backup quarterback last year [Dru Brown] against us, so I think their team will have some confidence going into the game because of that.

“But yeah, you go back and watch high school film just to get a good understanding of who he is.”

Illingworth’s high school tape is a thing to behold. In 11 games at Norco High in California last season, Illingworth threw for 3,081 yards and 44 touchdowns. That led him to being the No. 164 prospect in the 2020 class.

The unknown of preparing for both Sanders and Illingworth is that the two have opposite play styles. Sanders is a poster boy for dual-threat quarterbacks at the college level, while Illingworth is a more traditional pro-style passer. With Sanders, it could be a little more dangerous to recklessly blitz, but giving Illingworth too much time isn’t ideal for a defense.