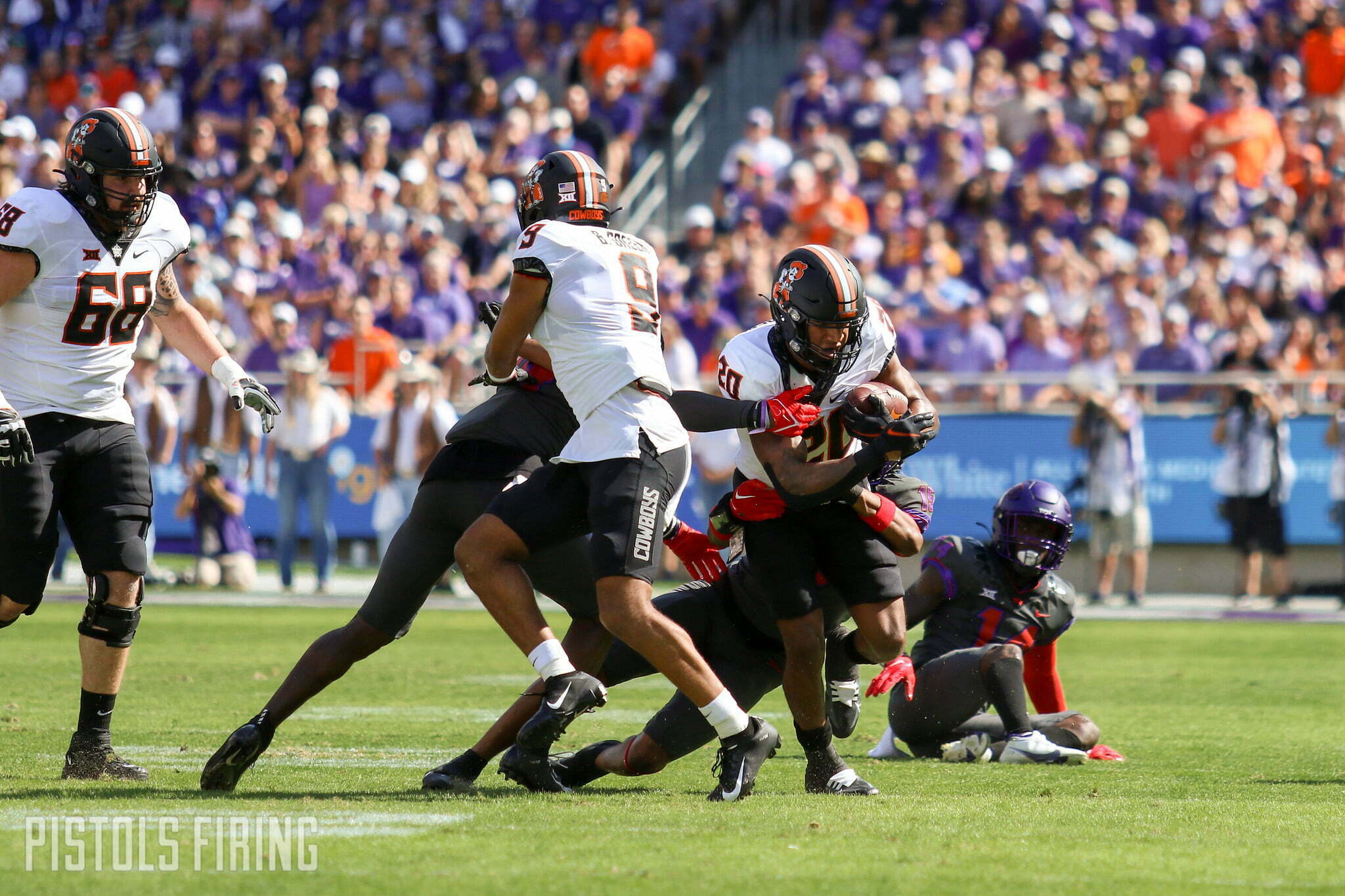 It took two overtime periods, several head-scratching special teams plays and a complete teardown of the substitution rules, but we’re down to one unbeaten team in the Big 12.

In the early going, Spencer Sanders was operating the Cowboys’ offense at cheat code level. But down the stretch and in overtime, TCU’s defense swarmed him and he could not connect with his receivers.

After he sat out of practice this week, and rumors swirled that he might not start, Sanders came out hot, completing seven of his first nine pass attempts and capping each of OSU’s first two drives with a rushing touchdown.

Sanders was responsible for 149 yards of total offense in first quarter, but he mustered just 168 yards over the next three quarters and two overtime periods. He finished 16-of-36 for 245 yards, a touchdown and an interception. He rushed 11 times for 68 yards and two scores. He was sacked twice.

When things were clicking for Sanders, he was connecting with Joh Paul Richardson. The sophomore led the Cowboy receivers with five catches for 51 yards and a score.

But OSU running back Dominic Richardson topped the Pokes in receiving yards, racking up a career-high 79 yards on three dumpoff passes. He also rushed it 22 times for 72 yards and a score.

Mason Cobb led all tacklers with a career-high 16 takedowns (eight solo). Sean Michael Flanagan allow had a career-high with 11 tackles and eight solo. Tyler Lacy had two tackles for loss and a sack and Xavier Benson and Sione Asi each registered a half sack.

An expected shootout between the Big 12’s two top offenses, devolved into a field goal-kicking contest for the middle two quarters. OSU scored touchdowns on its first two possessions and then another on its fifth drive early in the second quarter. Neither team scored a touchdown again until TCU pulled within seven in the fourth quarter.

After scoring on four of their first five drives, the Cowboys finished the first half with consecutive three-and-outs. But the Cowboys’ defense protected the lead by holding the Horned Frogs to field goals or scoreless on five-straight drives in which they made it into OSU territory. But that could last so long.

In the second half, TCU went to the ground to try to punish the Cowboys for playing zone, and it mostly worked. The Horned Frogs were able to edge back into the game despite settling for 3 over 7 thanks to their defense holding OSU to a fourth quarter of: PUNT, PUNT, INT, PUNT.

TCU and Duggan finally broke the touchdown drought, pulling within 30-23 with 9:22 left. On the next possession, a chance to answer and push the lead back to two scores turned into a disaster when Sanders underthrew Braydon Johnson on a deep ball and was intercepted at the TCU 8-yard line.

They say football is a game of inches, but if Sanders’ ball would have been about a yard longer, Johnson likely scores are we’re talking about a close call instead of the Cowboys’ first loss of the year.

The Cowboys’ defense once again bowed up and forced a three-and-out.OSU’s drive started at the 43 but was swallowed up for the Cowboys’ fourth three-and-out and Tom Hutton pinned TCU at its own 4. But the Horned Frogs marched down the field for an eight-play, 94-yard touchdown drive to tie it up at 30-30 with 1:57 on the clock. Both teams had a chance at the walk-off win but both exchanged three-and-outs to bring up overtime.

OSU won the toss and deferred again but it took Max Duggan just two plays to throw his second touchdown pass of the day and take a 37-30 lead.

OSU faced fourth-and-9 and Sanders had completed just one of his previous nine attempts (including an interception) when he found Johnson for a 23-yard pass and a first down at the 1. Dominic Richardson paid it off to keep the Cowboys alive.

But the Pokes sputtered in the second overtime, forcing Tanner Brown to attempt a field goal from 52 yards. The make was his career-high but it allowed Duggan and the Frogs the opening they needed for a walk-off win. Duggan rushed twice and running back Kendre Miller rushed four times including the game-winning touchdown from the 2-yard line.

Next up, the Cowboys head back to Stillwater to host Texas for America’s Greatest Homecoming.