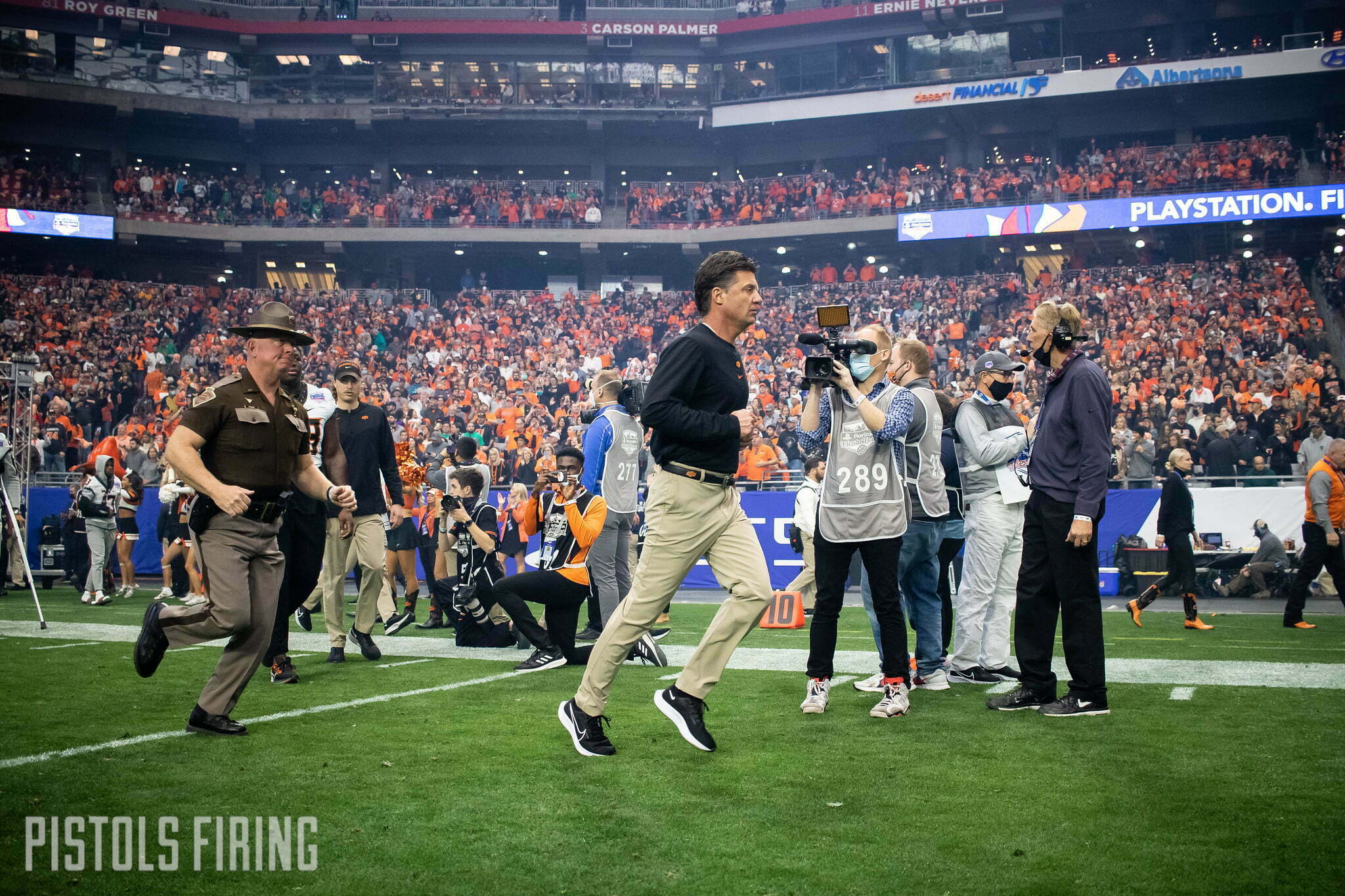 SCOTTSDALE, Arizona — The Cowboys’ season ended in spectacular fashion with a Fiesta Bowl victory against Notre Dame this past weekend, but Mike Gundy won’t get to long to revel in his team’s successes. He still needs a defensive coordinator.

Oklahoma State defeated Notre Dame 37-35 on Saturday when Mike Gundy divvied up defensive playcalling duties among Joe Bob Clements, Tim Duffie and Dan Hammerschmidt. On Sunday, Gundy said he’d take a day off Monday before going back through Fiesta Bowl film. He said he still was unsure whether he would promote one of Clements, Duffie or Hammerschmidt, or if he would try to bring a guy in from the outside.

“I promised my wife that I would take at least one day off — tomorrow,” Gundy said. “But then I have to start doing some work. I need to go back and look at this tape. I need to evaluate our staff.

“… I have to decide what’s best for us, and I’m going to work hard on that over the next three to four days and start moving. If we don’t promote with inside, and honestly right now I don’t know, I don’t know, then I’m sure I’ll interview at least six or eight guys just because it’s defense and that’s not my gig. I mean, I can kind of tell, but I’m not going to try to pretend that I know that. Like, I can listen to an offensive guy for 30 minutes and I know if I want to hire him or not. Defense is different for me.”

Gundy said the complexities of having three guys talking through play calls did provide challenges Saturday, especially early on. That’s evident by the 28-7 hole the Pokes had to climb out of. The shifts also resulted in coaches working in unfamiliar territory. Clements and Hammerschmidt moved from their normal positions on the field to up in the box, and some coaches from the box came down to field-level.

When the Pokes trailed 21-7 not long into the second quarter, Gundy said he was almost in “head coach panic mode.” He said he did the math to realize Notre Dame might hang 84 on the Pokes. But luckily for Gundy and the three staff members calling plays, it didn’t come to that, and the Pokes allowed only 7 second-half points after some timely adjustments.

If Gundy does choose to hire from the outside, recent history would suggest he’ll look far and wide. His last three outside coordinator hires were Jim Knowles, Sean Gleeson and Mike Yurcich. Of that trio, Knowles was the most traditional hire, but not many believed the former Duke DC was too inspiring when it first happened. Gundy brought Gleeson in from FCS Princeton and Yurcich in from Division-II Shippensburg, which were big steps up for each guy.

A CEO figure going into his 18th season, Gundy said he doesn’t coach a ton of offense much less defense anymore, so it’s important for his next hire to be able to run his own ship to a certain extent.

“I’m willing to let them do their job, so that person has to be able to control that room, has to be highly intelligent, and has to be very savvy and quick-thinking on game day, in my opinion,” Gundy said. “You know, ‘Are you three-down? Are you four-down? Are you blitzing? Are you a zone team?’ That’s pretty consistent in college football, but can you think and make good calls on game day? Do you know when to bunt and do you know when to hit-and-run? That’s what makes a good coordinator in my opinion.”