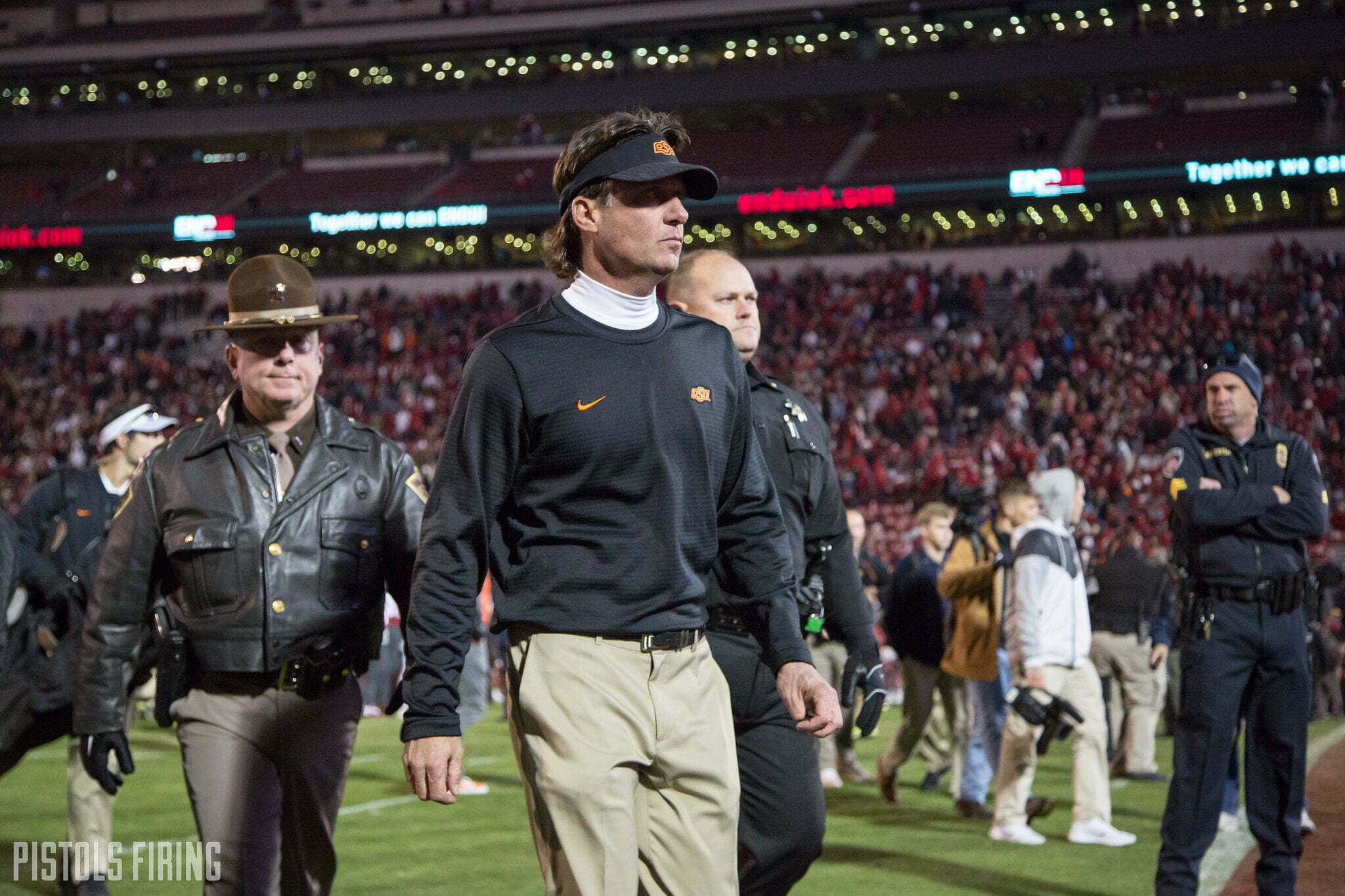 Mike Gundy’s 2-13 Bedlam record is a highly documented stat, but this year’s Bedlam has a caveat that makes that stat look a little better.

Gundy-led Oklahoma State squads are 2-3 against Oklahoma when coming off an open week, like this season. It’s still below .500, but a winning percentage of 40 percent is obviously better than a 13 percent.

There is an interesting pattern that has developed in these games that could excite any tinfoil hat savants.

Let’s look back at the five Bedlam games of the Gundy era that came after OSU bye weeks, starting with the first in 2008.

Dez Bryant’s lone home Bedlam tilt was quite the shootout.

The No. 11 Cowboys were within 3 twice in the fourth quarter. The first instance came when Zac Robinson found Dez Bryant for a 17-yard score to make it 37-34. The No. 3 Sooners answered on their next drive when Sam Bradford threw a touchdown pass to Brody Eldridge on 4th-and-1. It was Bradford’s fourth touchdown pass of the game.

Perrish Cox didn’t allow the capacity BPS crowd to be disappointed too long, though. He returned the Sooners’ answer with a 90-yard kick return.

“They will not go away,” Brent Musburger said. “Ninety yards of pure Bedlam.”

This was also the game of the infamous Bradford flip, where he tried to leap over OSU defenders near the goal line and ended up doing a cartwheel about 6 feet off the turf.

There were a ton of gaudy offensive stats from this game. Bradford finished 30-for-44 with 370 yards and four touchdowns. Jermaine Gresham was Bradford’s target of choice, catching nine passes for 158 yards and two scores.

On the OSU side, Robinson finished 17-for-26 with 254 yards and three touchdowns. He also ran for 90 yards and another score. Bryant caught six passes for 91 yards and a pair of touchdowns.

Part of the best season in modern history for the Cowboys, this was the second largest margin of victory for OSU in the rivalry (the largest was a 47-0 win in 1945).

A crazy stat looking back at this game is that OSU was able to get to 44 points without a passing touchdown. Brandon Weeden had an admirable performance that night, throwing for 217 yards, but a pair of OSU tailbacks were the offensive stars.

The game clinched Gundy’s first Big 12 title and sent the Cowboys to the Fiesta Bowl, where they would beat an Andrew Luck-led Stanford.

This is quite literally the one that got away from Oklahoma State.

Defending a 24-20 lead with a minute to go, it had looked as if Justin Gilbert snagged a game-winning interception, but at the last possible moment, the ball sputtered onto the turf in Boone Pickens Stadium.

That catch would’ve likely secured OSU its second Big 12 Championship in three seasons and sent the Cowboys to another BCS bowl. But alas, with 19 seconds left, Blake Bell threw OU’s only offensive touchdown of the game to give the Sooners a 27-24 lead.

The game ended with an Eric Striker scoop and score.

It was one of the most gut-wrenching moments in OSU football history.

In perhaps the biggest coaching blunder in Bob Stoops’ 18 seasons in Norman, he decided to punt to Tyreek Hill a second time after a penalty negated a fair catch.

Hill promptly sprinted the second attempt 92 yards to the house and tied the game with less than a minute to go.

In OT, Michael Hunnicutt missed a 44-yard field-goal attempt, and Ben Grogan chipped in a 21-yard try to save OSU’s season.

A freshman Mason Rudolph, making only his second career start, threw for 273 yards and two touchdowns. Both scores went to Brandon Shepherd, who had seven catches for 156 yards.

Another pseudo Big 12 championship game before the actual game was brought back, the Sooners won this somewhat anticlimactic bout on a rainy day in Norman.

Most OSU faithful remember this one as the game Mike Gundy wouldn’t throw the dang ball. Mason Rudolph completed only 11 of his 25 attempts for 186 yards. For what it’s worth, OU didn’t throw much either, but the Sooners’ pass game was much more effective. Baker Mayfield finished 13-for-19 with 288 yards and three scores.

The teams were tied at 17 at the half, but OU scored a pair of third-quarter touchdowns to OSU’s field goal and put the game out of reach.