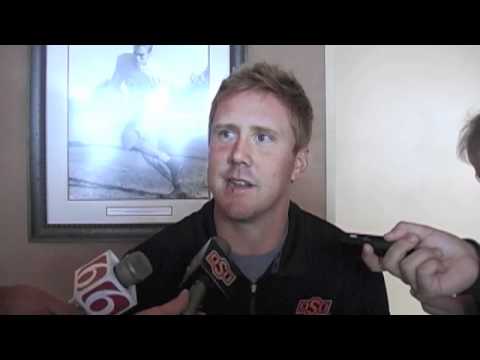 It seems rational four of ESPN’s Heisman voters would leave Weeden off their ballot entirely since they only have five spots each. (ESPN)

Wait, so we think this is a bad idea (which I said in June) but we’re still pushing forward with it because it’s what we’ve done all year? Seems reasonable I guess. (NewsOK)

This is the guy whose Heisman predictor two weeks ago said there wasn’t a Heisman contender on either LSU or Oklahoma State. (ESPN Insider)

Classic Weeden here with his responses to the age stuff. And it is getting old. The first eleven “he has a walker” jokes from Markelle were funny. The 100th “Aaron Rodgers is younger than him” tweet? Not so much. (NewsOK)

And here’s the guy he snapped at. (USA Today)

KC Joyner says the Heisman is at hand for Weeden. (ESPN Insider)

Cory McCartney has him in 2nd. (Sports Illustrated)

CBS has him in the lead. (CBS Sports)

Brendon Morris with a good write-up on where this team’s psyche is with the Heisman talk swirling. (O’Colly)

Jason Lisk wonders why the Heisman is so winning-oriented. I kind of agree with this. (The Big Lead)

Come on guys, we have to ask Weeden better questions than this. Also good to see Robert Allen trying to make himself the star of the interview.