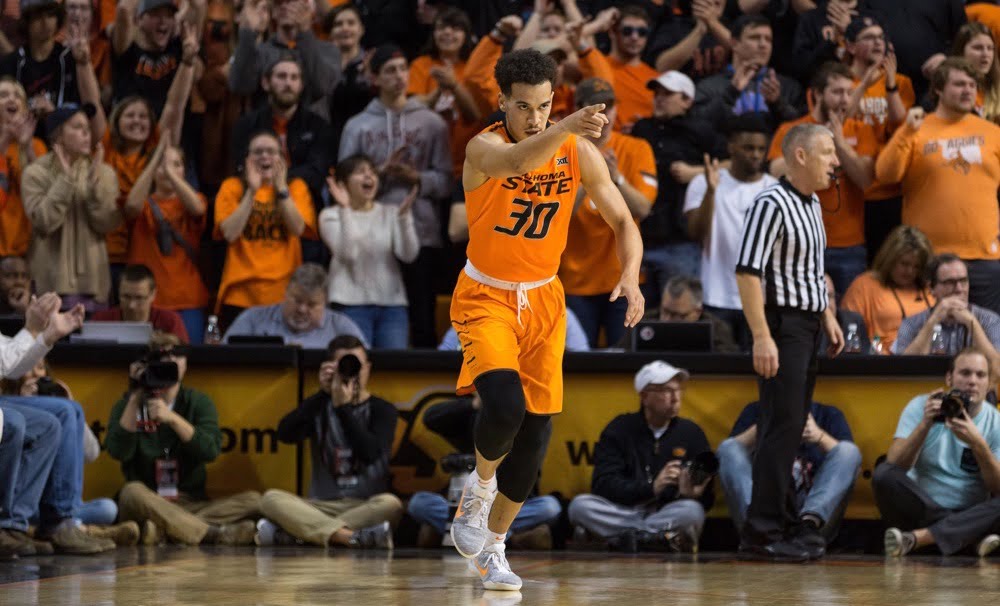 One thing became clear on Wednesday night after Oklahoma State defeated Kansas State 80-68. The Cowboys are dancing. At 8-7 in the Big 12 and 19-9 overall, even if you lose the last three Big 12 games to go 8-10 and get bounced in the first round of the Big 12 Tournament (unlikely), you’re in.

So now the Pokes are playing for seeding, and it’s time to have some fun with that. In fact, let’s play the “what if” game. As in, what if OSU runs the table, finishes 11-7 in the toughest conference in the country and makes it all the way to the Big 12 Tournament finals against Kansas? How high could it rise?

At that point it would be 24-10 overall, a top 20 KenPom team and likely would have finished in the top four of the Big 12. The best comp we have for that might be 2015 Iowa State which went 12-6 in the Big 12, lost to Kansas in the Big 12 Tournament and finished 25-8 before the NCAA Tournament started.

Iowa State that year got a No. 3 seed in the NCAA Tournament. A 3-seed!

That year in non-conference play, ISU blitzed Arkansas and lost to Maryland (sound familiar?!) It had 18 wins against KenPom top 100 teams (OSU currently has 12 with three opportunities coming up plus three more in the Big 12 Tournament).

The difference here is that ISU was actually ranked for much of the year and finished tied for second in the regular season that year instead of in the fourth-place range. It is a good candidate for the a best-case scenario comp for the Pokes since the Big 12 contracted, though, so we’re going to go with it.

The Fightin’ Hoibergs lost to Jerod Hasse’s UAB Blazers in the 2015 Dance. The Blazers then fell to UCLA in the second round. And Hoiberg took the Bulls job.

So if OSU wins its next five and then loses to KU in the Big 12 Tournament championship game, do they get, gasp, a 3-seed? I don’t think so. That ISU team had more brand recognition, better players and was coming off a Sweet 16 run the year before. I do think OSU could get a 4-seed, though. And if they win the next three and sweep the Big 12 Tournament (dream with me a little bit!) then they probably do get a 3-seed.

Of course this is a best-case scenario. The reality will probably be much closer to this comp that OKC Dave tweeted out.

ESPN currently has the Pokes at a 6-seed. CBS has them at a 9-seed (??) Wins over Kansas and Tech at home as well as Iowa State on the road would obviously be a massive boon to OSU’s tourney potential. The bottom line is that you want to get off that 8-9 game and, preferably the 7-10 game as well. Getting to a 6-seed and playing a 3-seed is a lot different than playing a No. 1 or No. 2.

Will the scenario I laid out above happen? Probably not, but it’s insane to think about just how far this team has come since starting 0-6 and occupying the Big 12 cellar. No matter what seed the Pokes eventually end up with, Jawun Evans and Co. are going to be a hell of an out in March.