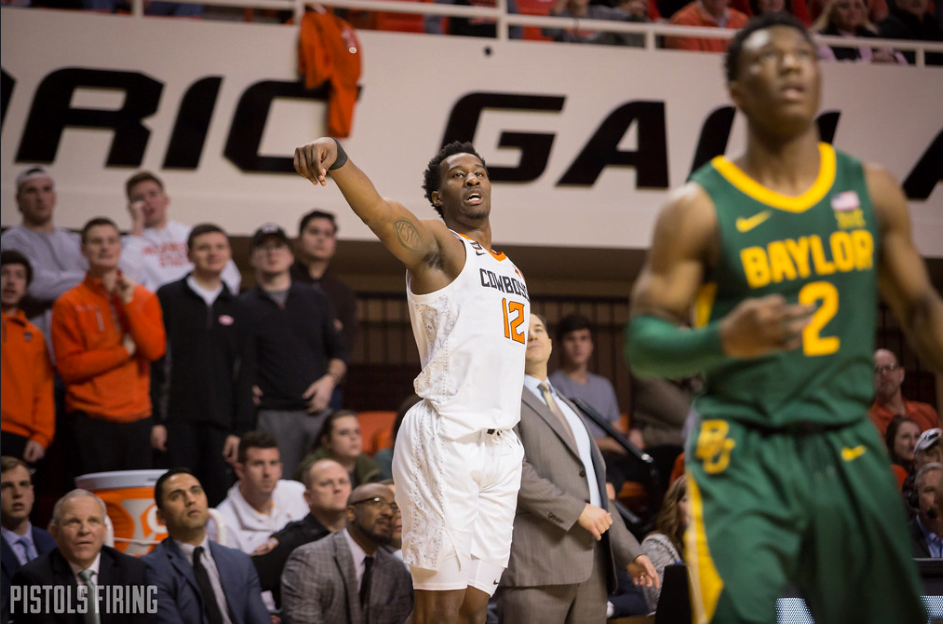 STILLWATER — Cameron McGriff does a lot of things for the Cowboys.

He scores. He is 13 points away from becoming the 43rd player in program history to hit 1,000 career points. He rebounds, as he leads the Pokes with 112 this year. He does myriad hustle plays that don’t show up on the box score. But he also leads.

In the final moments of Oklahoma State’s 75-68 loss to Baylor on Saturday, Yor Anei threw an errant pass after getting a rebound that essentially sealed the game. In frustration Anei ripped his headband off and put his head down.

Anei, a sophomore center, is in probably the biggest slump of his young college career. After dominating much of the nonconference slate, Anei scored just seven points in the Cowboys’ first four Big 12 games. He played better against Baylor, finishing with eight points and eight rebounds, but right at the end, he threw the ball away.

McGriff and the rest of the team ran to Yor after OSU intentionally fouled. McGriff told Anei to put his headband back on, but he didn’t mention anything about the turnover.

“Cameron tried to tell him always keep your composure out there and not let people see you like that,” Isaac Likekele said. “That was big time, especially coming from one of our senior captains. It would’ve been easy for him to get mad at Yor and really focus on that play or the turnover, but Cam didn’t mention anything about him throwing the ball away. Cam mentioned him and how he reacted to it after he threw it away. I felt like that was really an important message. We look to Cam and the rest of the seniors like big brothers, so it was really helpful of him to pick up Yor like he did out there.”

The start of McGriff’s senior season hasn’t gone to plan. The Cowboys are the only Big 12 team winless in conference play through five games. But McGriff also knows that when this OSU team does get going, Anei is going to be a big part of it.

“That’s just love among each other,” McGriff said. “That’s what we call it. When some one is down on themselves a lot, some one’s pretty hard on themselves, he’s very prideful, wants to be a great player, that’s what we love about him every day. But we also know that he has to continue to stay in great spirit because we love the Yor that’s smiling all the time. You rarely see Yor not smiling. That’s not a good situation. When you have him in a great mindset and a great state mentally, this team can be even greater.”

Some time this week, McGriff will get the 13 points he needs to reach 1,000. He’ll get his first chance at it Tuesday night against Iowa State. Lindy Waters hit the mark on Jan. 6, and when McGriff gets there, it’ll be the first time since 2014 that two players hit 1,000 career points in the same season. Marcus Smart and Le’Bryan Nash did it that year.

If recent history has anything to do with it, McGriff has a good shot to net the points he needs Tuesday. He put up 16 against Baylor on Saturday, and he is averaging 17 points in his past three meetings with the Cyclones.