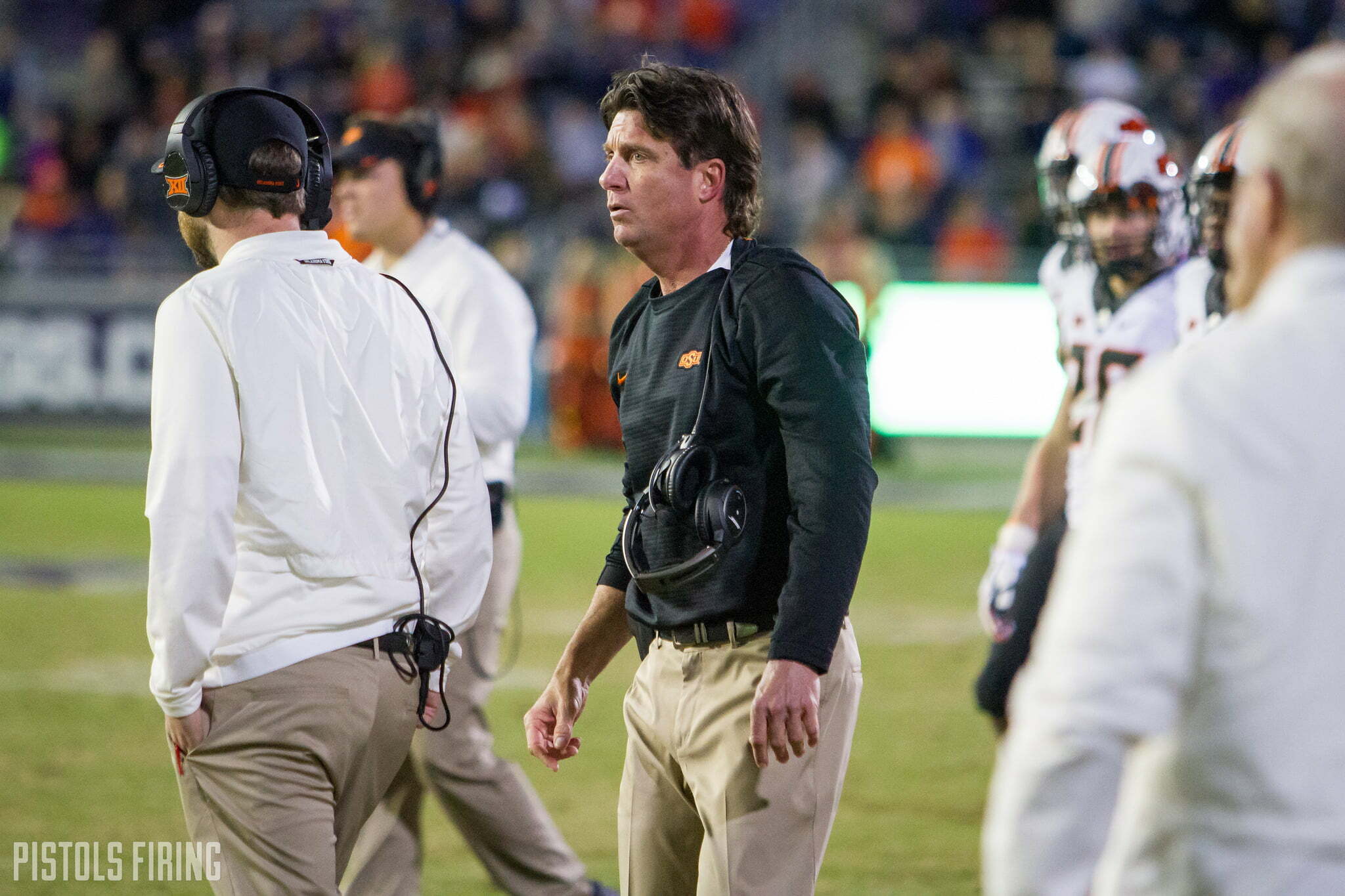 Oklahoma State finished its regular season on a low note, turning in one of the worst offensive performances both by the numbers and (more so) by the eye test in memory, against TCU.

It was a disappointing end to an equally disappointing Big 12 slate. The Cowboys will have a chance to end 2018 on a high note with whichever bowl partner they draw, but I’m not sure how much of a dent that will put in the overall bleh that his season elicits among fans.

A program that has been defined by consistency and is built on culture, has been an example of neither over the last three months. It’s fair to put this season among the most disappointing of Mike Gundy’s career.

To some, the preceding 2017 season may have been the most disappointing. It was a year in which a dynamic duo that would leave as OSU’s all-time leading passer and receiver decided to come back for one last go at the Big 12. And that title game in Arlington hardly seemed to be its ceiling. OSU was favored to win every game, for crying out loud.

After shellacking Pittsburgh on the road, the Cowboys looked prepped for another fast start and a potential run at the College Football Playoff. Despite an historically good Baker Mayfield, the Pokes went toe-to-toe with Oklahoma and should have had the opportunity at a rematch in Jerry World. But home losses to TCU and Kansas State book-ended that all-timer of a Bedlam game. One of OSU’s most talented groups ended its year in the Camping World Bowl.

You could talk me into 2009 being one of the more frustrating years during Mike Gundy’s tenure. A team that looked poised to build of its 9-4 finish in 2008, stumbled into another 9-4 record thanks to being outscored 48-7 over its final eight quarters against a bad (by its standards) Oklahoma team and Ole Miss.

But those Cowboys were harpooned by a Dez Bryant off-the-field debacle and Kendall Hunter injury. And furthermore, that team was just the beginning of that golden age of OSU football. Expectations weren’t as high on a yearly basis as they are now.

The 2014 season usually gets a pass because things ultimately worked out. A pre-mullet Gundy endured a five-game skid — the longest since his first year at the helm — and only made a QB change when his hand was forced by injury. You could write a book on the what-ifs that came from Mason Rudolph’s first career that came in Norman.

This year certainly had lower expectations coming in than those in 2009 and 2017, but that monster that Gundy has built needs more than a .500 regular season finish — and No. 9 finish in-conference — to sustain itself.

The worst part is that I think that this team was better at its best than that 2014 team, making some of its low points all the more puzzling and frustrating. Let’s compare the two a bit.

OSU hung in there with the defending champ Seminoles and Mason Rudolph made it look somewhat respectable in his debut in Waco, but the Pokes got run off of the fields in Ft. Worth, Morgantown and Manhattan.

Here’s a look at each of our examples and how those teams have played up or down to competition.

It’s in that juxtaposition that I think the real disappointment lies. We’ve seen a complete lack of discipline from this team all year. It hasn’t just been the head-scratching penalties, or the (at times) INT-happy nature of Taylor Cornelius. This team has simply not looked motivated to play several of its games. That’s … baffling. It’s the opposite of what we’ve seen from Gundy-coached teams for much of his tenure.

It doesn’t take much mettle to get amped up for Bedlam in Norman or Homecoming against a top 10 Texas team. A real sign of toughness is a team that shows up to a morning game on the road and imposes its will on a 2-4 K-State squad from the jump.

Take last Saturday for the most recent example. In a game that absolutely meant something, OSU was less than lethargic. Its offense showed up without a pulse and was an utter embarrassment for three quarters.

“As a coach, it was disappointing to watch,” said Gundy during his postgame press conference. “We waited until the fourth quarter to play on offense and make plays. It was essentially just a game full of mistakes for us, one right after the other. The defense played well, but the offense couldn’t move the ball at all.”

Forget that the Cowboys had a chance to stamp their name on a respectable bowl game ticket, or that it was the last Big 12 game for several seniors’ careers. They were playing the team that knocked them out of the top 10 at home a year ago. If you buy into the notion of rivalries and revenge and all of those fun things that supposedly make college football great, how do you reconcile an Oklahoma State team that looks like it would rather be anywhere else than playing a night game at TCU?

“…I was concerned about whether we could rally back after a big win last week,” Gundy  continued. “We were a little flat early in the week, then we practiced well and finished the week strong, but we certainly didn’t play like that tonight.

“The good news is that we get to play another game and I told the team that I would sure hate to finish the season like this.”

You can bring me all of your excuses — replacing a franchise QB, underrated losses on the offensive line, a revamped defense — and I’ll explain how they resemble a certain part of the anatomy that we all have.

If you can impose your will against Texas, go toe-to-toe with OU and stage a wild comeback (with your defense) against West Virginia, there is no excuse to lose to Kansas State, or get blown out at home by Texas Tech. And there is no reason you should beat yourself in Waco or pack it in on the way to Ft. Worth.

This year’s Oklahoma State team presents, by far, both the largest enigma and disappointment of any I can remember following because of a lack of mental fortitude it has showed on a week-in and week-out basis. That starts with the head coach, and it trickles down through the staff and falls in the lap of each player.

Mike Gundy has always leaned on his culture as that constant that allows him to thumb his nose at recruiting rankings and which condones yearly Bedlam losses. But what happens if that culture is changing right before our eyes, for the worse?