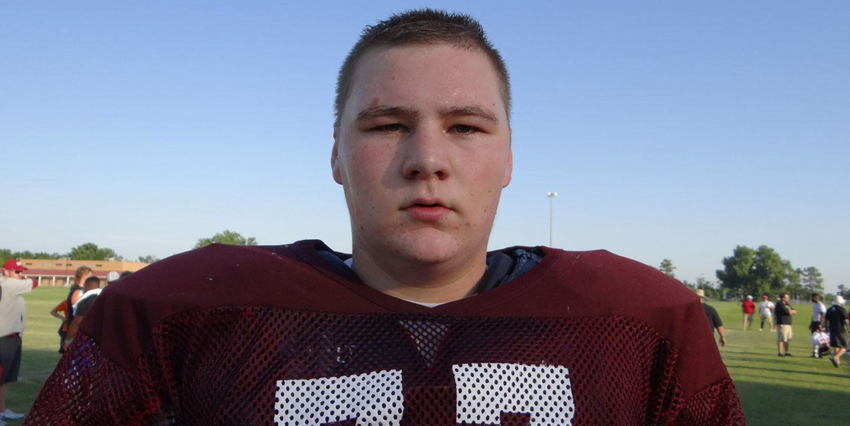 Oklahoma State’s fourth commitment of the 2018 class came last week. And boy was it a big one. Rising junior prospect Hunter Anthony, a 6-foot-7 offensive tackle prospect from Tuttle, America, joined the commitment list. It’s the first offensive line recruit of the class, and the first commitment for Josh Henson.

Anthony committed just within an hour of announcing his offer from the Cowboys, calling it a “dream offer.” But he didn’t necessarily grow up as an OSU fan.

“I’m a Chicago Bears fan and just a Big 12 fan in general,” Anthony said. “There is a long tie from OSU to Tuttle football and it just seemed like the perfect fit. I enjoy the coaches and I trust them. I believe with lots of hard work we will win several Big 12 trophies.”

Anthony doesn’t lack for confidence — and why should he? He’s the biggest, most dominating player nearly every time he steps on the field. Listed at 320 pounds, he’s a big body but versatile tackle who has good movement.

Anthony’s commitment to OSU came in part because of the coaching changes at Oklahoma State. When OSU parted ways with Greg Adkins, formerly one of his main recruiters, it put his status in a bit of limbo. But the Cowboys clearly made him a top priority in the class and offered early, and he noted that the return of Josh Henson was huge in his decision.

“It was awesome,” Anthony said of Henson’s return. “I went to Missouri to see him [Henson was the OC at Mizzou] and then he was here last year. It was very exciting when he was announced as the OL coach. Just an awesome fit. He’s my kind of coach. He knows how to push and still be a great role model for me.”

Anthony said his work ethic is a key element of his game that will help his skills translate to Big 12 football. With offers from Iowa State and Kansas, he’s shutting it down and sticking with the Pokes. He might turn out to be one of the gems of OSU’s 2018 recruiting class.