Hunter Mahan dressed like a Smurf but played like a monster on Saturday at The Open at Muirfield.

Mahan shot a day-best 68 and played his way into the final group on Sunday with Lee Westwood — they will tee off at 8:10 CT. Mahan is -1 and tied with Tiger Woods who will play with Adam Scott in the second to last group Sunday.

Mahan leads the field in birdies with 13 which doesn’t sound a lot through three rounds but considering the average score is 74.7 (par is 71) that’s pretty freaking good. Here are some highlights from Saturday:

The best finish Mahan has ever had at an Open is T6 in 2007 at Carnoustie when Padraig Harrington won. This is actually his second straight major to play in the final group on a Sunday — he did so with Phil Mickelson at the U.S. Open last month (finished T4).

Mahan will try to erase that tomorrow and become the second Cowboy with a major in his trophy cabinet — with Tiger, Scott, Westy, Lefty, Pato, Snedeker and Sergio in the hunt, it should be a blast.

Here’s a look at the scoreboard: 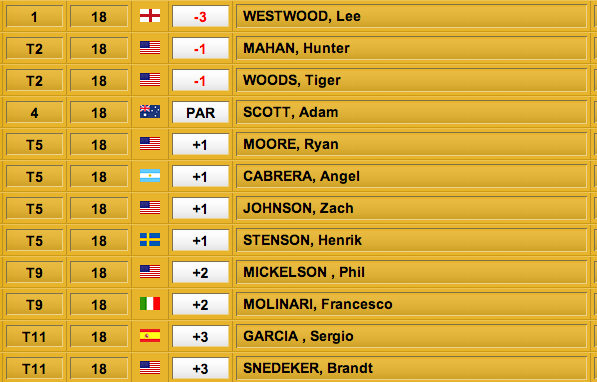