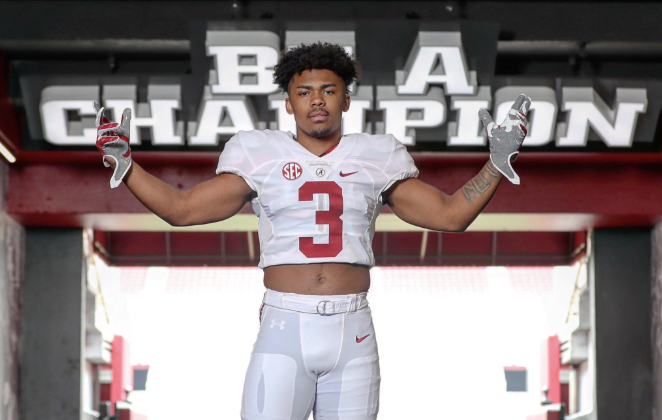 Owasso (Okla.) running back Isaiah Jacobs is one of Oklahoma State’s top remaining skill targets in the 2020 recruiting cycle, and it appears the coaching staff will know its fate with him soon.

Jacobs announced Tuesday night in a bit of a surprising recruiting twist that he’s set his commitment date, and that date is on Wednesday at 2:15 at his high school — less than 24 hours away from the tweet in which he scheduled his decision.

Wednesday is the first day of a three-day signing window for the early period, which runs Dec. 18-20.

Change of plans I will be Committing tomorrow at Owasso Highschool gym at 2:15 please respect my decision no interviews

The 5-foot-10, 200 pound Jacobs is the younger brother of Oakland Raiders (and former Alabama) running back Joshua Jacobs, who slipped out of the state after a late but meteoric rise in the recruiting process several years ago. Isaiah, however, hasn’t flown under the radar in the same way. He’s garnered more than a dozen offers from across the country and has a wealth of options from which to choose.

Those options appear to be down to five after he trimmed his list two months ago to Michigan, Ole Miss, OSU, Maryland and Arkansas. Unofficially, I feel it’s likely down to three: OSU, Ole Miss and Michigan.

Jacobs visited OSU on numerous occasions as a recruit, including the weekend of Bedlam where he made his official visit. His final official visit, however, appears to have been a trip to Ole Miss two weeks ago — the same weekend the program hired away Lane Kiffin from FAU.

What does this all mean? Does Ole Miss have a shot at swooping into the state? Perhaps. OSU has a good shot here, though, and with zero commitments at running back in the cycle, Jacobs likely has to feel good knowing the opportunity for early playing time is potentially available and only a short car ride away from home.