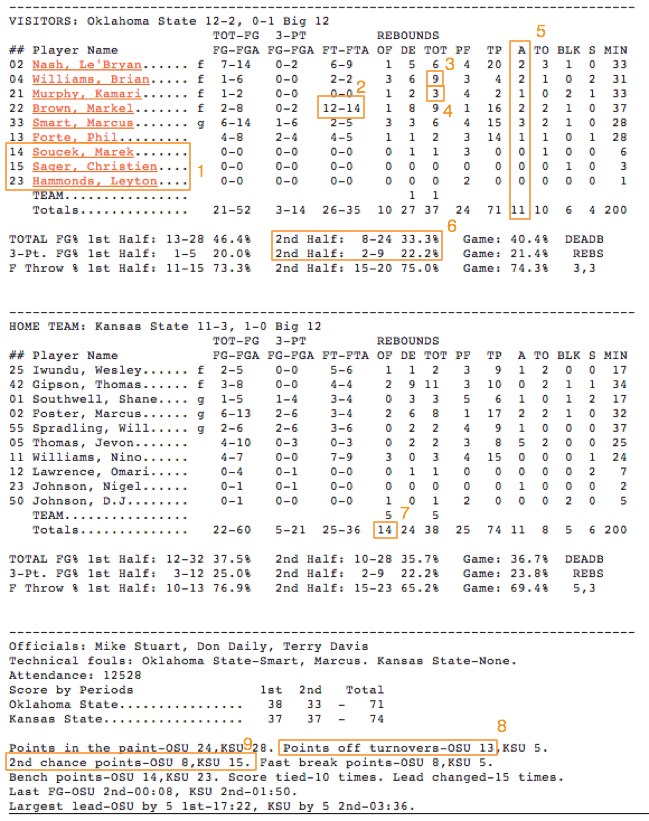 Haven’t done this in a while but back at it because it’s basketball season. A look at OSU’s box score from Manhattan on Saturday…

1. These are our second, third, and fourth guys off the bench. I don’t even have a joke. Also, lots of people asking me about Gary Gaskins — folks I’ve talked to say he’s weaker than my two-week-old son. I do hope he plays at some point because he’s more athletic than Soucek[1. Like saying Brian Phillips is a better writer than me.] but he hasn’t earned it yet…apparently.

3. This is a development, hopefully a positive one. He doesn’t have to score on anything other than putbacks but he needs to get 8-10 rebounds a game to help fill in the Cobbins void.

4. This is a development, and not a great one. Murphy has to have more than three boards a game. It was offset by Nash/Smart/Brown rebounding but this has to improve.

5. Not good, not who OSU should be. They should have 11 assists on turnovers-turned-fast-breaks alone.

7. It felt like 13 of these came in the last five minutes. Also of note: OSU has given up double-digit offensive rebounds in all but three games this season.

8. This should be at a minimum of 20 for a small, athletic team like OSU that likes to get out and run and doesn’t have great offensive sets in the half court.[1. Even if Franny thinks they do.]

9. It’s like the fourth stat in here that points towards it, but once again the Cobbins loss is immense. Murphy has to step it up on the defensive boards.