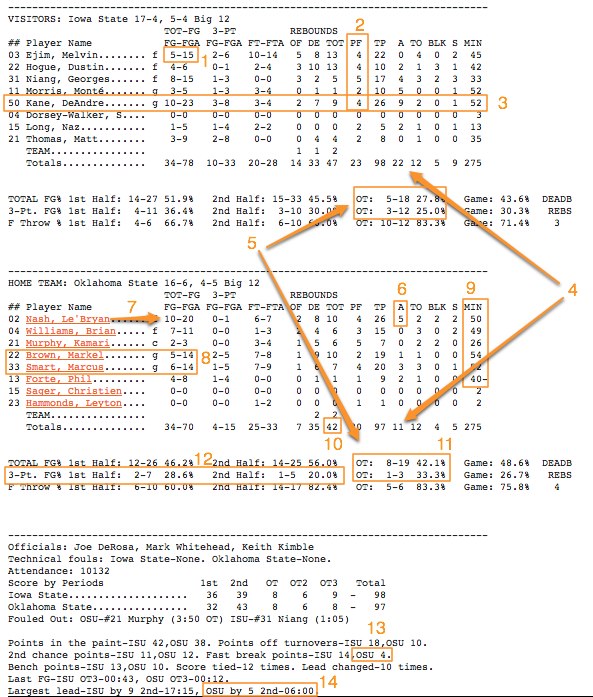 1. I thought OSU actually did a good job on the Big 12’s leading scorer. He got his at the line but for how small we are on the interior, holding Ejim to 5/15 from the field is pretty good.

2. How many OTs could the have gone? One more?

3. That’s a “tell your grandkids about the time…” line. Wow.

5. Can you believe the team on the top won after their respective shooting performances in OT?

6. I get that you were running the offense through him but it strikes me as odd that with Marcus Smart touting his own distribution levels (Amazon Prime-ish high, I hear) that Nash leads this team in assists.

7. Where is the “grown man” statistical category. Speaking of grown men, quick aside here. I was at Homecoming one year (2006? 2007? something around there) and I overheard Aaron Petway say “we have a curfew tonight?! I’m a grown ass man, I don’t have curfews!” He was definitely a “grown ass man.”

8. 11/28 from your point guard and shooting guard. That’s just not going to cut it. They were better as a whole but if Smart takes a shot outside 10 feet in the next three games, he should be benched.

9. Was the coroner on notice? I feel like Markel has played a mini-season in the last three games.

10. It sure didn’t feel like we rebounded with them last night. We were only five shy of their total? Maybe it was because they got a bunch of them late that killed us.

12. It’s sad that my reaction to a 3/12 performance from three in regulation is “that was better because we didn’t take so many of them” but that is my reaction.

14. Again, largest lead in the last three games against OU/Baylor/ISU has been five. That’s incredible, and not in a good way.