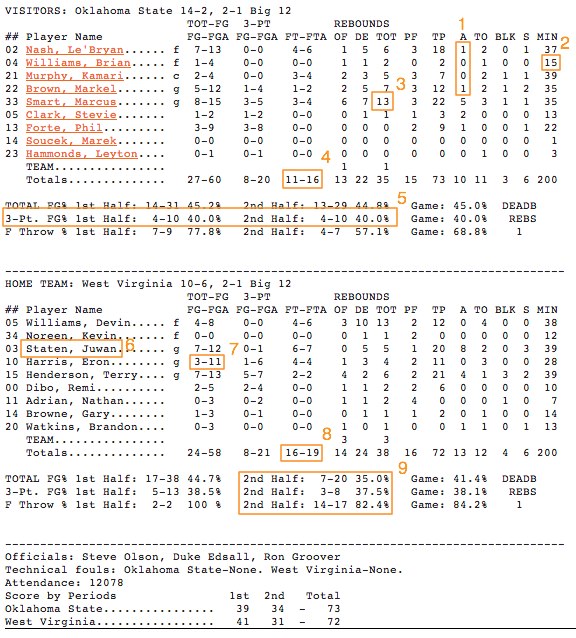 2. Brian Williams has just been terribly ineffective of late. He’s athletic, which is great, but he can’t score like Forte or Stevie.

3. Smart is currently second in the Big 12 in rebounding, nestled between 6’9 Cory Jefferson and 7’1 Isaiah Austin.

4. This is all right but I’d like to see this team getting to the line more like 25 times a game.

5. I can live with this, I think. Bump that to 50% though and you become a different team. I think OSU also takes too many contested threes. Eric Williams said it on Rivals, but if I see one more quick-trigger, off-balance, in-transition pull from Smart or anyone not named Forte…….

7. I can’t remember who was guarding him but I think it was some combination of Markel and Brian Williams that shared in shutting down WVU’s leading scorer.

8. It’s pretty impressive to beat a team on the road that shoots and makes more free throws than you. I really don’t care who they are.

9. Such a great defensive second half. I’m afraid OSU is going to be second half only shutdown defense, though, because they can’t afford to get into foul trouble in the first.