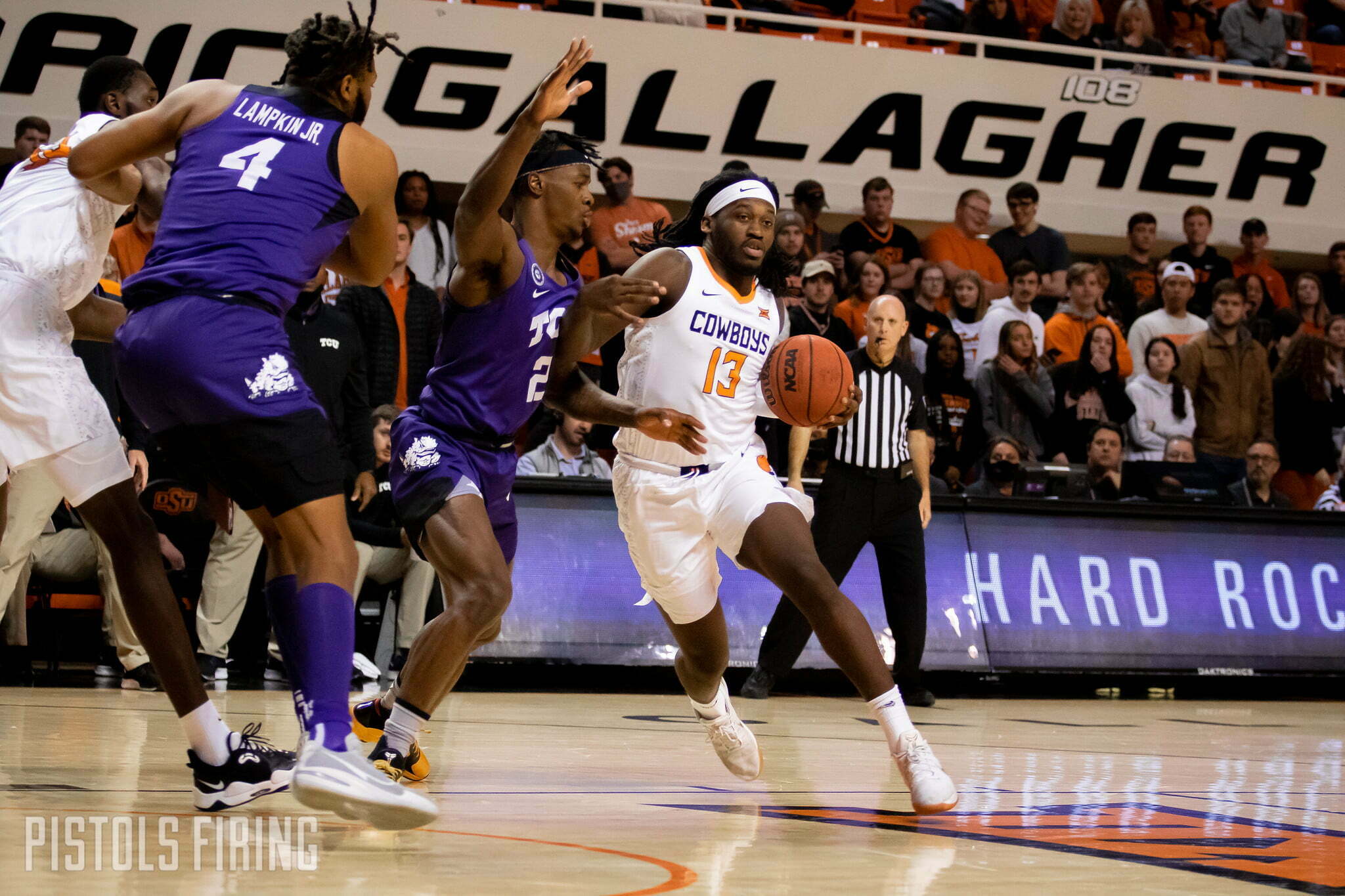 Oklahoma State fell to TCU 77-73 in Fort Worth on Tuesday night, despite a season-high effort from Isaac Likekele and a dramatic comeback attempt by his Pokes.

When Oklahoma State and TCU met in Stillwater last month, the Cowboys scored the final seven points of the game to pull out a one-point win. After trailing by double digits for most of the second half, the Cowboys put fear into the heart of the Frogs with an 11-0 run to pull within 70-69 with 2:04 remaining. But despite some late-game heroics, the Cowboys couldn’t quite get over the hump.

The Horned Frogs were without their leading scorer Mike Miles, but it was Chuck O’Bannon who did the most damage against OSU when the two teams met in Stillwater back on Jan. 19. It was he would did the damage against the Cowboys on Tuesday. He scored 19 points on just nine (!) field-goal attempts, making three 3-pointers and going 4-for-4 from the free throw line.

TCU is the Big 12’s best rebounding team and it showed. The Horned Frogs cleaned up the glass for a 37-24 advantage against OSU. But the Frogs are also the league’s worst free-throw shooting. And that didn’t stick. The home team went 18-for-23 from the charity stripe while OSU made just five of its 10 free ones.

On top of gobbling up misses, the Frogs took advantage. Seven of TCU’s first nine points were second-chance points, and they dominated that category 14-7. OSU only mustered three points off offensive boards at halftime top TCU’s 12. But the Cowboys made up that discrepancy by forcing 17 turnovers scoring 18 points off them.

The Frogs looked ready to hop away with it after building a 14-4 lead five and a half minutes in before Bryce Williams knocked down a transition 3-pointer, and Avery Anderson knocked down back-to-back deep shots as part of a 13-2 run to take a 17-16 lead.

And then the Cowboys used a 6-0 run to build a five-point lead turning those TOs into points.

But the Cowboys didn’t go away without a fight. Isaack Likekele scored 17 of his season-high 19 points in the final frame. He shot 9-of-12 from the field, dished out a team-high five assists and grabbed six boards and three steals.

After the Cowboys pulled within one with two minutes left, TCU’s Damion Baugh made a tough jump shot to push the Frogs up 72-69. He finished with 15 points and eight assists.

With 20 seconds left and OSU still down three, Avery Anderson missed his second free throw, and the Cowboys fouled TCU big man Eddie Lampkin to put a career 52 percent free-throw shooter on the line in crunchtime. He made them both.

Anderson scored quickly to pull back within 75-73 with 13 seconds left, and the Cowboys called their last timeout but Emanuel Miller got behind all of OSU defenders and caught the deep inbounds pass to spoil the press (and the comeback). His dunk pushed the lead back to four with 11 seconds left. Bryce Thompson grabbed an offensive board of an Anderson miss but was blocked into the backcourt, and the Frogs were able to collect it and hold it for the win.

With the loss, the Cowboys fall to 11-12 and 4-7 in conference play. Next up, the Cowboys return to Stillwater for a clash with West Virginia at 1 p.m. Saturday.