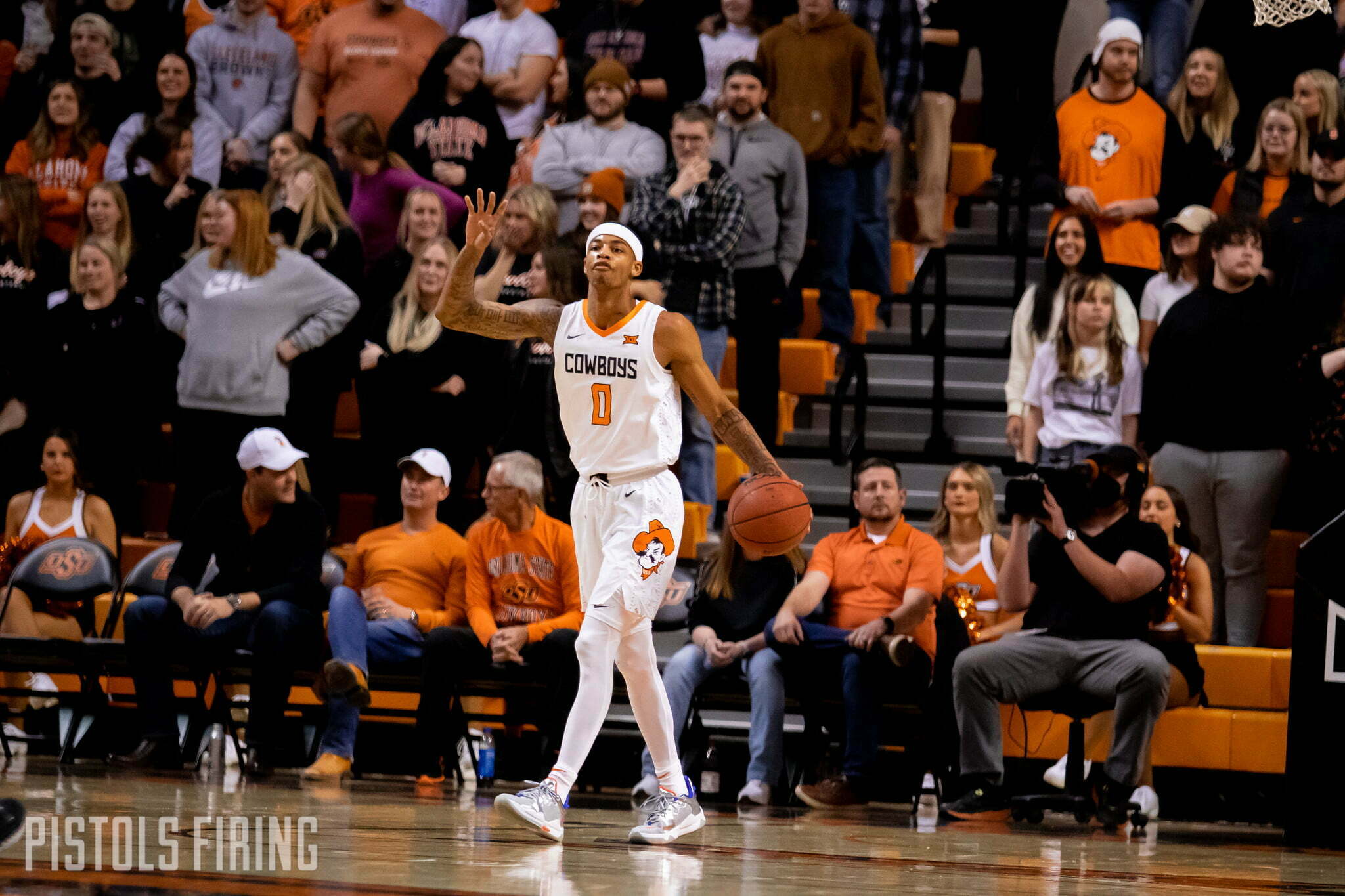 These teams were so evenly matched that they needed five extra minutes to decide the game.

Oklahoma State fell to No. 23 Iowa State 84-81 in overtime in Stillwater after a could-be game-winner was called off due to offensive goaltending. The Cowboys had a couple of chances to send it to another overtime but both came up short.

Oklahoma State was only in it thanks to Avery Anderson. The junior guard scored a career-high 32 points on 9-of-16 shooting. He grabbed three boards and two steals and dished out five assists to just two turnovers. His five made 3-pointers were also a career best.

Anderson has been in a slump for over a month, but he picked a great time to snap out of it. In the second straight game without its leading scorer and assist man, Oklahoma State found itself in a dogfight with a ranked, reeling Iowa State squad.

There were 28 lead changes and 15 ties and neither team led by more than a possession until the 5:20 mark in the second half when Avery Anderson made both tries from the charity stripe to put the Cowboys up 65-61. Sixty-six seconds later, Iowa State’s Izaiah Brockington’s 3-pointer kept the Cyclones within reach. The only other four-point lead came in OT and it lasted 22 seconds.

The game was tied at two when Isaac Likekele tipped the ball away from Iowa State point guard Tyrese Hunter, collected it and spun around the freshman before setting up Moussa Cisse for a two-hand alley-oop. The crowd in GIA erupted. A few moments later, a Tyreek Smith block led to a Bryce Thompson runout dunk and it was much of the same most of the way.

The Cowboys shot 47 percent from the field but made their hay in the paint. OSU scored 32 points down low and only managed 7-of-24 from deep. Cowboys not donning the No. 0, went 2-of-13 from 3.

The Cyclones broke a streak of 24-straight Big 12 road losses dating back three years, but they did it by snapping out of a more recent slump. ISU came in losing four of five and off its worst offensive performance all season. On Saturday in a loss to TCU, the Cyclones turned in their lowest scoring output (44) ever inside Hilton Coliseum thanks to a season-low 30.9 percent shooting night. The ‘Clones flipped that script, shooting 53 percent from the field and 43 percent from deep. ISU was led by Izaiah Brockington’s 26 points on 20 shots, including several timely ones.

He made a contested stepback midrange jumper to tied it up at 70-all with 20 seconds left. The Cowboys’ hero, Anderson, was called for an offensive foul with 5.4 seconds left to give the Cyclones the chance for the walk-off win. The in-bounds pass with to freshman point guard Tyrese Hunter who shot down the court but lost control and stepped on the baseline out-of-bounds with 3.1 ticks on the clock.

Anderson got a chance to put a cherry on his big night when he squared up for a deep 3-pointer, but the ball glanced just over and off the top of the iron to send the game into overtime.

Bryce Thompson has pushed out his career scoring total twice over the last four games and averaged over 16 points each, but he was cold on Wednesday night, shooting just 1-of-8 from the field for seven points. But he was cold-blooded, knocking down a pair of late free throws in overtime. Minutes later, Anderson knocked down two more free ones to pull the Pokes within 82-81 with 19.7 remaining in the third period.

Similar to the end of regulation, Hunter stepped out-of-bounds after taking an in-bound pass which gave OSU the ball down one with 15.4 seconds left. Anderson took the in-bounds pass and got a good look at the rim. When his layup bounced out, Moussa Cisse stuffed it with two hands but was called for basket interference. After a review, the call stood, the Cyclones had the ball with the lead, and then a foul sent Tre Jackson for his first two free-throw attempts of the season. He made them both to put the visitors up 84-81 with 11 ticks left. Both Keylan Boone and Anderson would get off shots to tie in that time but neither fell.

Next up, OSU heads to Gainesville to face Florida in the Big 12/SEC Challenge at 3 p.m. Saturday.