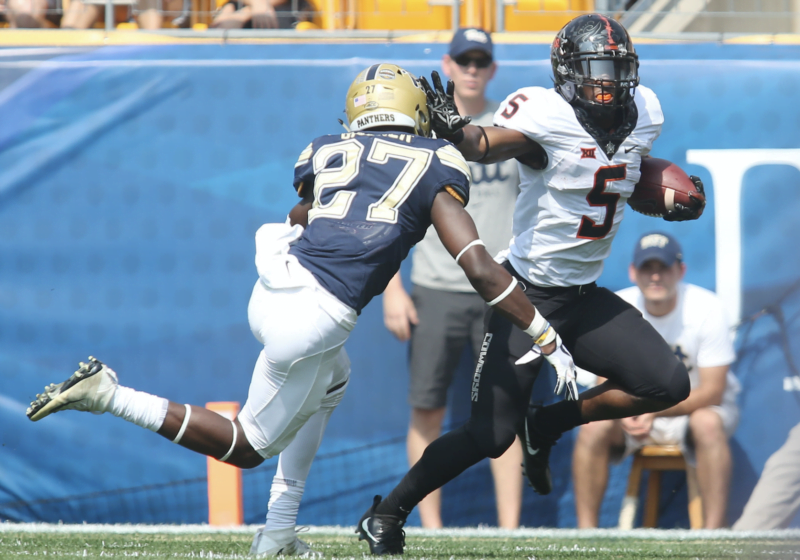 Could OSU-Pitt round 2 have gone any more differently than the 2016 bout?

Unlike a season ago in which the Cowboy offense sputtered and the defense struggled to contain James Connor and the Pitt offense, OSU absolutely throttled the Panthers on their home field from start to finish on Saturday. The offense, led by Heisman hopeful Mason Rudolph, opened the game through 30 minutes of play with seven drives and seven TD’s to show for it as OSU busted open a 49-14 lead at the half.

Here are all 7 TDs for #okstate in the first half against Pitt. pic.twitter.com/DIzRSKbbnX

Mason Rudolph threw for 423 yards and 5 TDs in that opening half effort and the rout was on early in part because of his Big Ben imitation which was on point from the get-go.

Rudolph’s day was over midway through the third quarter against Pitt and he finished with 497 yards and 5 TDs. Most impressive was his ability to sprinkle the love across the field. He hit five different receivers in his performance and four of them, McCleskey, Stoner, Ateman and Washington, finished with 100+ yards—a first-ever in OSU history.

First time in #OKState history the Cowboys have four 100-yard receivers in the same game.

The defense, despite giving up 21 points on the day, did very well in forcing 2 turnovers and a quarterback change midway through the game. Justin Phillips scored on a pick-six for the second-straight week and its third-down defense kept Pitt off the field by limiting them to just 5-of-15 — a major concern from the Tulsa game that seemingly has improved dramatically.

OSU is now off to a 3-0 start for the ninth time under head coach Mike Gundy in 13 seasons, and sets up the Cowboys for an epic showdown next weekend against TCU in Stillwater.