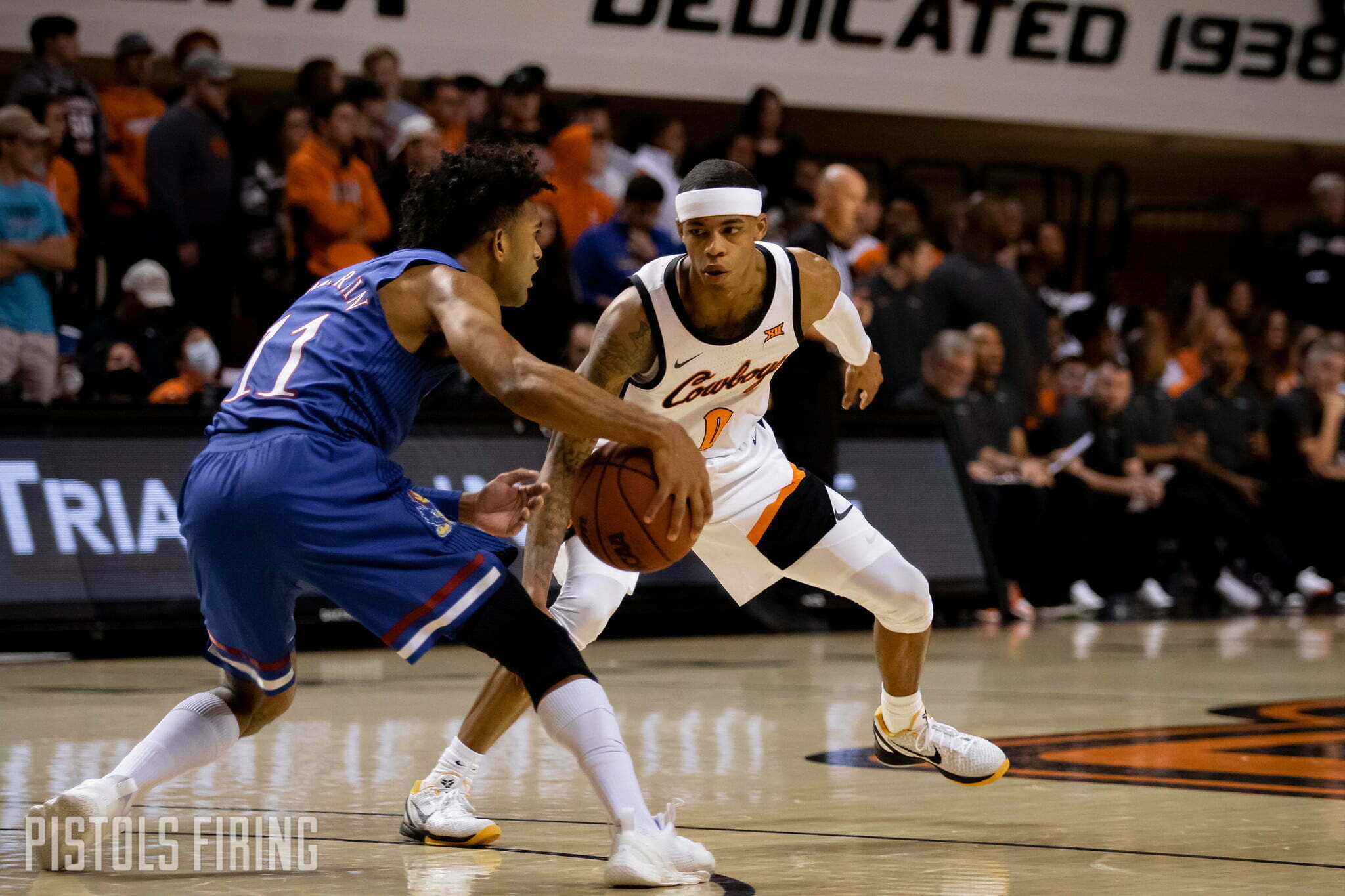 After falling behind by 14 midway through the first half, the Cowboys battled back to take an early second-half lead. Ultimately, they couldn’t overcome one of the most prolific offenses in the nation — but they made it tough on the Jayhawks.

The Cowboys (7-5) didn’t shoot the ball particularly well, were out-rebounded by 14 and went through their normal stretches in which they struggled in the halfcourt. But they gave put a scare into the Jayhawks (12-1).

Oklahoma State last played a game on Dec. 18 after a meetings against USC and Texas Tech were moved or canceled due to COVID. But despite being off for 17 days, the Cowboys shook the rust off relatively quickly.

Kansas made its first four shots, and OSU started 1-for-4. That trend would continue for the next few minutes of the half. But with 9:12 left in the first half — with the Cowboys down 29-15 and looking ripe for the blowout — OSU proceeded to go on a 14-0 run fueled by Isaac Likekele and Keylan Boone. The Cowboys tied it thanks to a Bryce Thompson made jumper with 36 seconds left. The Jayhawks missed their final 20 field-goal attempts of the first half.

On the first possession of the second half, Likekele laid it in to give the Cowboys their first lead of the game. But the Cowboys would only muster as much as a three-point lead over the next couple of minutes before the Jayhawks finally figured it out on offense. Kansas guard Christian Braun orchestrated a 7-0 run (almost alone) to put the visitors back into the driver’s seat. The Jayhawks built a 53-43 lead nearly midway through the second half and were able to hold off the Pokes from there.

The Pokes made a late surge, scoring six-straight points in nine seconds to pull within nine. OSU did it with length, specifically with Bryce Williams’ length. In their last chance to make it a game, Williams had a pair of quick deflections including his nearly stripping the ball from Remy Martin. If he would have retained possession, GIA would have erupted, but Martin wrestled the ball away. It led to a fastbreak dunk by David McCormack to push the lead to 11 with 2:43 left.

OSU played gritty. There were stretches late in the game in which multiple players donning both jerseys were seen sprawled across the floor for a loss ball. The Cowboys have their flaws, but they gave a Top 10 team a real challenge. Kansas needed a big bounceback game from a star to put the Pokes away.

Isaac Likekele led the Pokes with a season-high 16 points on 15 shots. He completed the double-double with 12 rebounds and added three assists and zero turnovers. Bryce Thompson scored eight points on 8-of-12 shooting against his former team, and Keylan Boon added eight more going 2-for-4 from 3.

“If Kansas wants to win a national championship, the Jayhawks will need more of the good David McCormack than the bad David McCormack,” said most talking heads. Well, they got the good on Tuesday night and wouldn’t you know it, Bill Self can coach.

McCormack was taken out of the starting lineup ahead of Tuesday’s game. On the second time stoppage, Self seemed to yell right into his face as McCormack came to the bench. He then went on a 6-0 KU run all by himself, and he was just getting started. McCormack led all scorers with 17 points on 13 shots and grabbed a career-high 15 rebounds.

Without the superstar power of Cade Cunningham, we know this isn’t the same Oklahoma State team that defeated Kansas in Stillwater last season. The Cowboys just don’t run like they did with a future No. 1 overall pick. OSU scored 37 fastbreak points in last year’s win over the Jayhawks, but just four tonight. OSU doesn’t have the halfcourt game to consistently put up points. OSU bothered the No. 4 adjusted offense, according to KenPom, into 17 turnovers but converted them into just 11 points.

Next up, the Cowboys host the Longhorns at 1 p.m. Saturday in Stillwater.