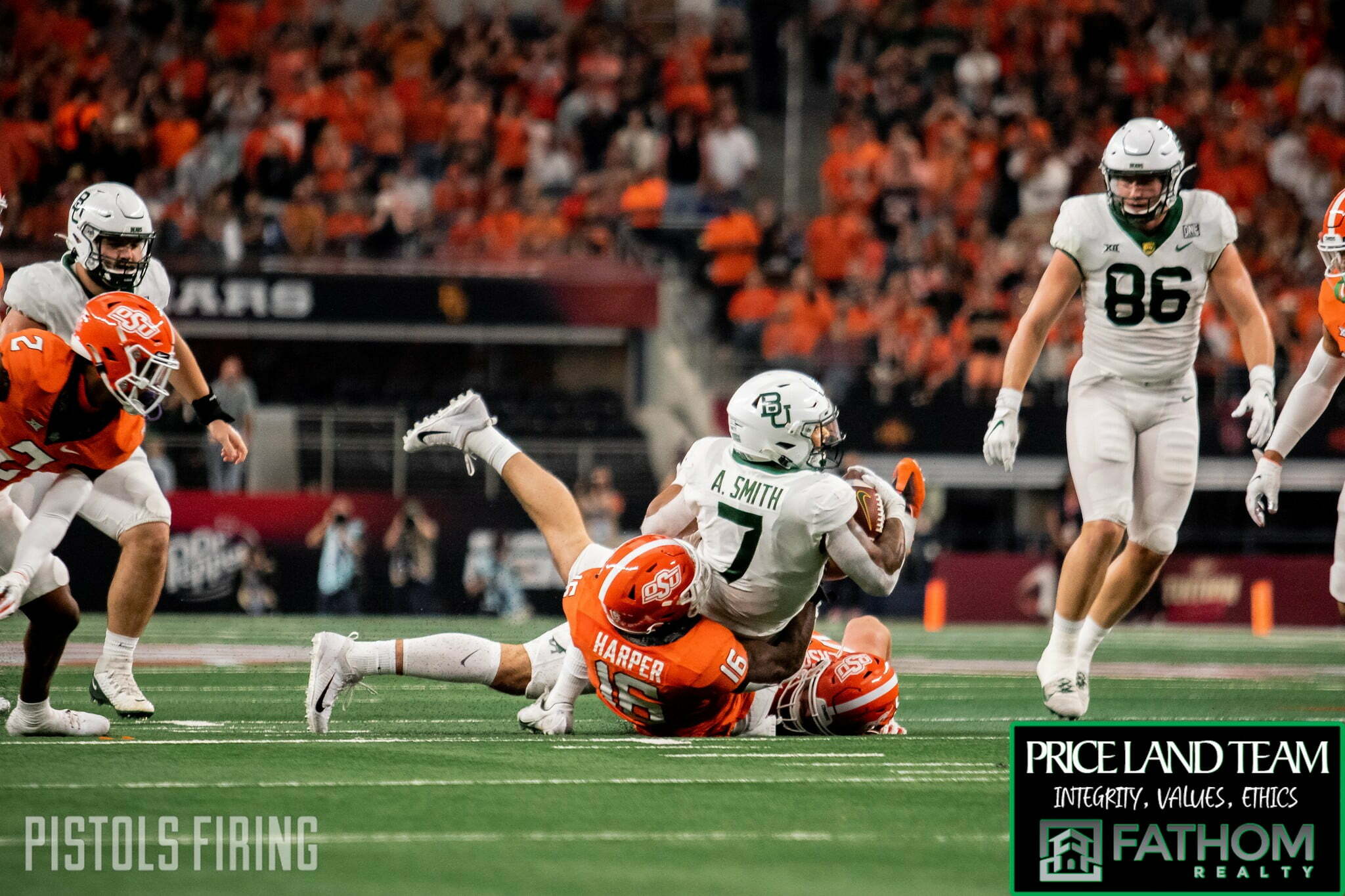 No. 5 Oklahoma state fell to No. 9 Baylor 21-16 in the Big 12 Championship game after a would-be game-winning drive stalled at the goal line.

Despite a gritting outing by their defense and a valiant comeback effort, the Cowboys were unable to overcome a 4-2 turnover deficit and a paltry 70 rushing yards minus injured running back Jaylen Warren.

Warren, the Big 12 Offensive Newcomer of the Year, watch the game from the sidelines, and the Cowboys could have used him. OSU’s 70 rushing yards was its lowest output since the season opener against Missouri State and its 1.8 yards per attempt was its lowest in a game since 2015.

Baylor’s stout front seven bullied the Cowboys’ line, routinely holding the Pokes to no gain or a loss on first down. The Bears were able to play the Cowboys for the pass which led to tighter windows, and a slew of interceptions.

It couldn’t have started much worse for the Cowboys offense.

Spencer Sanders threw two interceptions in the first quarter, which directly led to 14 Baylor points. Out of six first-half possessions, on only two did the Cowboys make it into the red zone. The Pokes stalled on both at the Baylor 6-yard line and had to settle for field goals.

Those turnovers by Sanders put the Cowboys’ defense in a coupe of short-field situations and helped make his counterpart look otherworldly.

Redshirt freshman Blake Shapen, instead of Sanders, looked like the Big 12 first-team passer. In his second start, Shapen completed his first 17 passes. He finished 23-for-28 for 180 yards and three touchdowns. Meanwhile, Sanders completed 31 of his career-high 46 pass attempts for 257 yards. Unfortunately, he set another career high, four turnovers to zero scores. Those four picks set a Big 12 Championship record, as well.

Tay Martin hauled in nine of his 14 targets for 88 yards. Dezmon Jackson, who had not caught a pass all season, grabbed all seven of his targets for 39 yards, as there were a lot of screen passes and dump-offs. Sanders was the Cowboys’ leading rusher but managed just 33 yards on 13 carries. Jackson added 31 on 19.

Malcolm Rodriguez logged 12 total tackles (eight solo) and 1.5 tackles for loss. Collin Oliver continued his impressive season with two sacks to push his total to 11.5. Brock Martin, Jason Taylor II, Tre Sterling and Brendon Evers each got to the quarterback, as well.

Coming in for injured Christian Holmes, sophomore Korie Black had a pass breakup that he was not credited for as well as a blocked field goal and a recovered muffed punt.

After going down 21-3, the Cowboys’ defense clamped down, not allowing another point. Meanwhile, the Cowboys continued to struggle against a stout Bear unit, but did just enough to claw back into the game. A 20-yard field goal by Tanner Brown pulled the Cowboys to within 21-16 with 4:30 remaining.

The Bears’ defense was elite at protecting its own goal line and that, ultimately, made the difference in the game.

OSU was stonewalled and held to a field goal after getting as far as the Baylor 6-yard line twice and the 1-yard line once. And the ensuing stop by the Cowboys defense gave the Pokes the chance for a walk-off scoring drive with 5:27 remaining.

But the inability to move the ball on the ground at all led to the Pokes’ fourth three-and-out on the game. OSU elected to punt on third-and-7 from its own 27-yard line and depend once again on its defense. All Baylor had to do was hold onto the ball for 3:51.

Brendon Evers followed a 2-yard tackle for loss with a 3-yard sack to set up third-and-15 and led to another huge stop. The Cowboys used their timeouts to get the ball back with another chance for game-winning drive starting at 3:23.

The Cowboys had found the end zone only once so far in the game, but a field goal would no longer do.

Spencer Sanders captained a 17-play, 89-yard drive that came just short of a the game-winning score. A pass interference by Mark Milton gave OSU first-and-goal, once again at the 2-yard line. Once again, the Bears held strong, holding Jackson to one total yard in three attempts, the final of which was a turnover on downs with 24 seconds remaining. The Bears successfully downed the ball and are the Big 12 champs.

It was this close.

Next up, the College Football Playoff committee will release its final rankings on Sunday at 11 a.m., and bowl designations will follow.