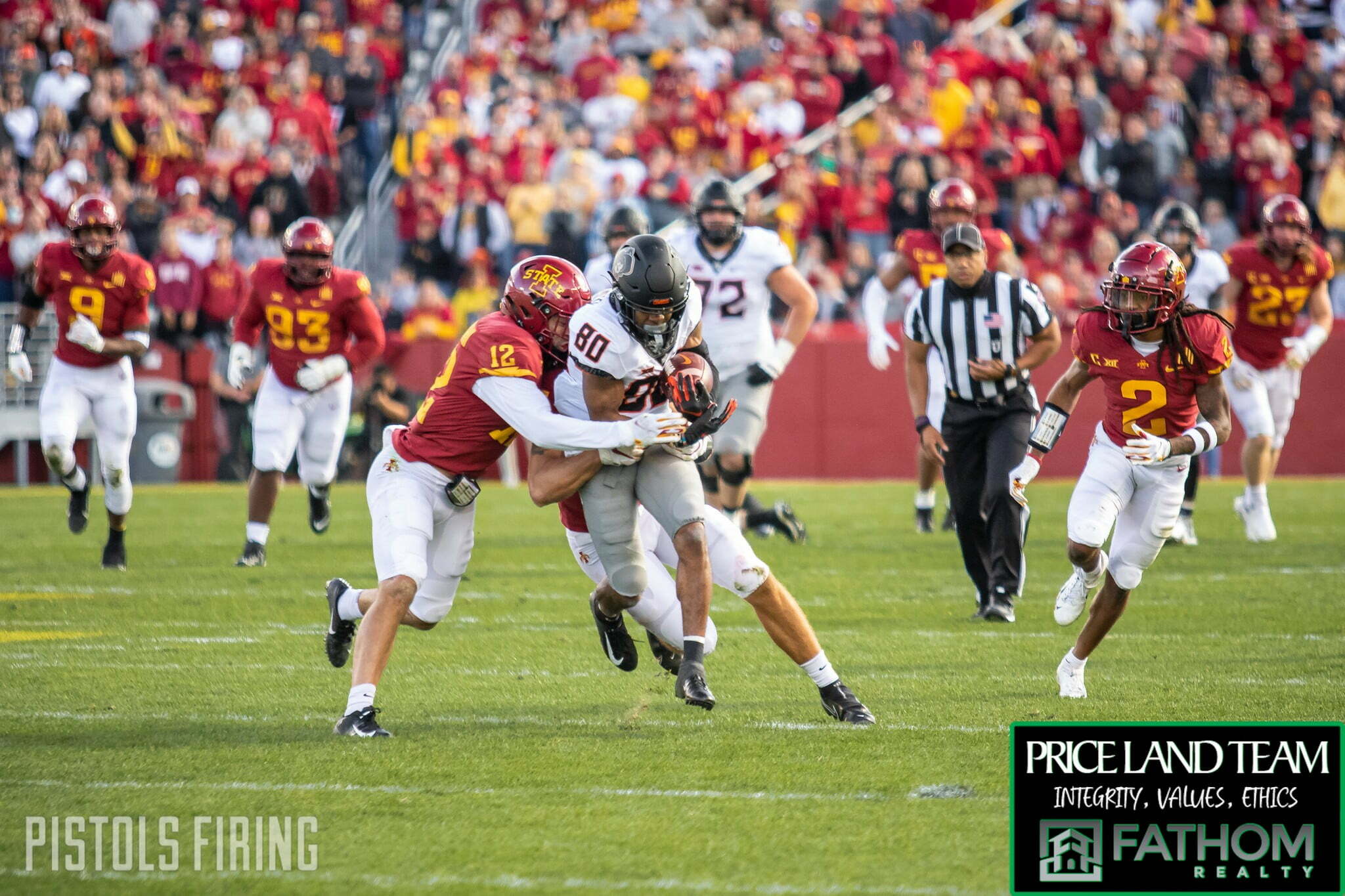 Oklahoma State fell to Iowa State on the road 24-21 after a would-be game-tying (or game-winning) drive fell just short thanks to a controversial spot on fourth down, and it was this close.

A controversial spot ended the Cowboys’ chances and penalties and missed field goals were a factor. But the real story was that the Cowboys (6-1) couldn’t sustain drives on offense to support their defense. It’s been a common theme all season, and in Ames — where undefeated Cowboy dreams go to die — it finally cost OSU.

Oklahoma State was effective running the ball early. Jaylen Warren and Spencer Sanders’ legs set up a Brennan Presley touchdown catch on the Cowboys’ second drive. OSU lined up for a 50-yard field goal attempt on the next possession but missed wide right.

Meanwhile, the Cowboy defense shut down the first three Iowa State drives and five of the first six. Other than an extended nine-and-a-half minute TD drive to start the second, the other five ended with three-and-outs and on four-play turnover on downs.

But the Pokes’ inability to stay on the field on offense, and its inability to take advantage of favorable field position on multiple drives would ultimately hamper their success.

OSU is not a third quarter team.

The Cowboys came in only scoring three total points in the third all year, and that number didn’t change in Ames. OSU was outgained 144-57 in the third and outscored 10-0.

After falling behind, and getting outright outplayed in the third quarter, the Cowboys came out swinging in the fourth. Spencer Sanders completed back-to-back throws to Tay Martin of 20 and 25 yards, respectively. The latter added six points to the scoreboard and gave OSU a four-point lead.

But the Cyclones weren’t done. The home team answered with a six-play touchdown drive to take a 24-21 lead.

A low snap that led to the first of consecutive Spencer Sanders sacks harpooned the Cowboys answer. Iowa State took over with 4:21 remaining, up 3. Once again, it would be up to Jim Knowles’ defense to keep the Cowboys in it, and it did its job forcing a three-and-out.

The Cowboys got the ball back, down 3 points with 3:18 left and the opportunity for a walk-off winner. It was fourth-and-2 with 1:39 left on the clock. Sanders found Brennan Presley who was hit at the line of scrimmage before a second effort almost got him to the line to make, and almost gave the Cowboys life.

The call was not overturned and the Cyclones were able to take the victory formation.

Spencer Sanders finished 15-of-25 for 225 yards and three touchdowns. He also picked up 29 net yards on the ground. Brennan Presley caught a career-high six passes and logged season-highs in yards (84) and touchdowns (two). Tay Martin added four catches for 80 yards and a score.

Jaylen Warren saw his 100-yard streak end. After a fast start, the Cyclones made a point of slowing him down. He finished with 18 carries for 76 yards.

OSU kicker Tanner Brown missed a 50-yard field goal attempt in the first quarter that would have been a career-high had he made it. But the one fans will remember from a 3-point loss is the 32-yard kick in the third quarter that went wide right as well.

In the end, OSU just couldn’t sustain drives. The Cowboys were a season-worst 2-for-10 on third down and 0-for-5 in the second half.

Next up, the Cowboys host Kansas for Homecoming next Saturday at 6 p.m.