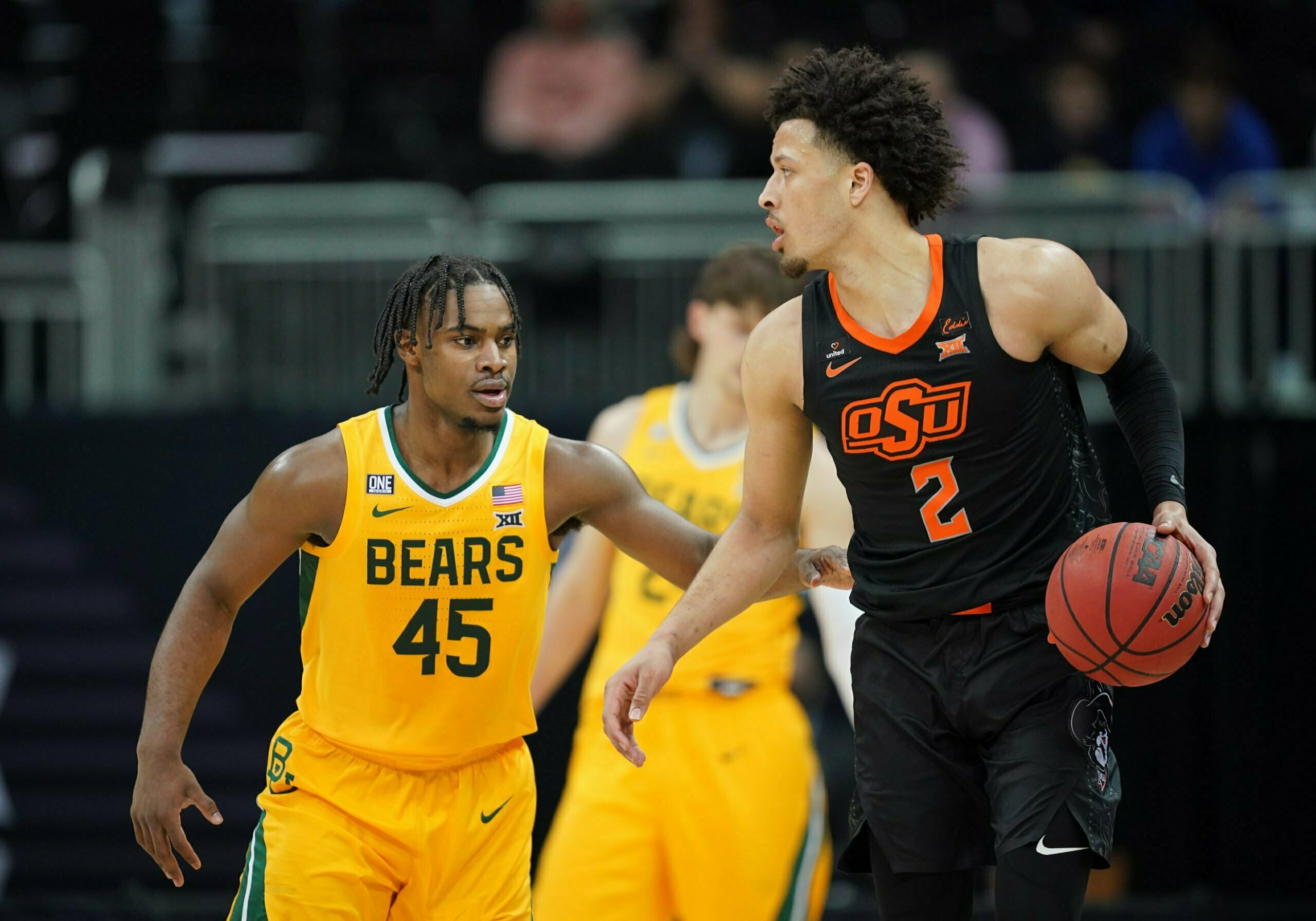 Oklahoma State defeated Baylor 83-74 in the teams’ semifinal tilt in the Big 12 Tournament. Cade led all scorers with 25 points and looked like the Big 12’s Player of the Year against the league’s regular season champs.

Cade put up another clutch performance, knocking down consecutive huge 3-pointers to give his Pokes a late lead and then he went 5-of-6 from the free-throw line in the final 43 seconds to seal the huge win.

The Cowboys move on to the Big 12 Tournament Championship for the first time since 2005.

Coming into Friday’s matchup, we (I) made a big deal about the Cowboys needing to play under control to cut down on their turnovers. But Mike Boynton was more concerned with outrunning the Bears than slowing things down. What do I know?

The Cowboys got out in transition early and often, forcing 12 Baylor turnovers in the first half, that lead to six points. The Cowboys held a 15-2 edge in fast break points at the break and finished owning the stat 17-4.

Boynton has been successful at switching his defensive schemes all season but this was a master class against the Bears. The result was the Cowboys holding college basketball’s best 3-point shooting team to its second-worst perimeter shooting performance of the season (6-of-28) and the Cowboys getting out in transition and running circles around (and past) the Bears for much of the night.

Avery Anderson showed off his trademark speed to put a nice cap on the first half and give OSU the 35-30 lead.

The Bears had only trailed at halftime four times this season coming in and the five-point lead by the Cowboys tied the Bears biggest deficit heading into the second.

But the Bears were able to slow things down in the second half, at least somewhat, using their size to attack the boards and to get to the line.

Baylor took a 45-43 lead with 14 minutes left and the Cowboys weren’t able to take it back for 10 minutes of game time.

Cade Cunningham’s stepback 3-pointer knotted things up at 50-all, but MaCio Teague scored five-straight of his own to kickstart a 10-2 Baylor run, giving the Bears a 60-52 lead with 7:34 left.

But big-time players make big-time plays. Baylor has a handful of stars in its back court, but OSU has a superstar.

Cade was 2-for-7 from 3 before this stepback beauty.

The deep shots finally started falling for the Bears, but the Cowboys used some old-fashioned 3-point plays to distance themselves from Baylor.

Avery Anderson’s and-one put the Cowboys up 73-72 with two minutes to go. Then Cade found Rondel Walker on a cut to the basket and his and-one put the Pokes up 76-72 with a minute and a half left.

Cade posted up MaCio Teague with 44 seconds left and was able to draw a foul. Cade Clutch knocked both free throws down to push the Pokes’ lead to six. The Bears were behind the eight-ball and the had no choice but to foul the coldest closer in college hoops and watch him saunter to the charity stripe and bury them, again and again.

OSU finished the game on a 13-2 run over the final 2:07 to beat the Bears 83-74. The nine-point underdogs earned a nine-point win. Double-coverage.

Despite the frantic pace the Cowboys played with, they committed just 13 turnovers, their lowest mark in the last seven games that produced 14 Baylor points. Over the previous three games they’d committed 58 for 70 points against them.

The Cowboys will face off against Texas for the Big 12 Tournament crown Saturday at 5 p.m.