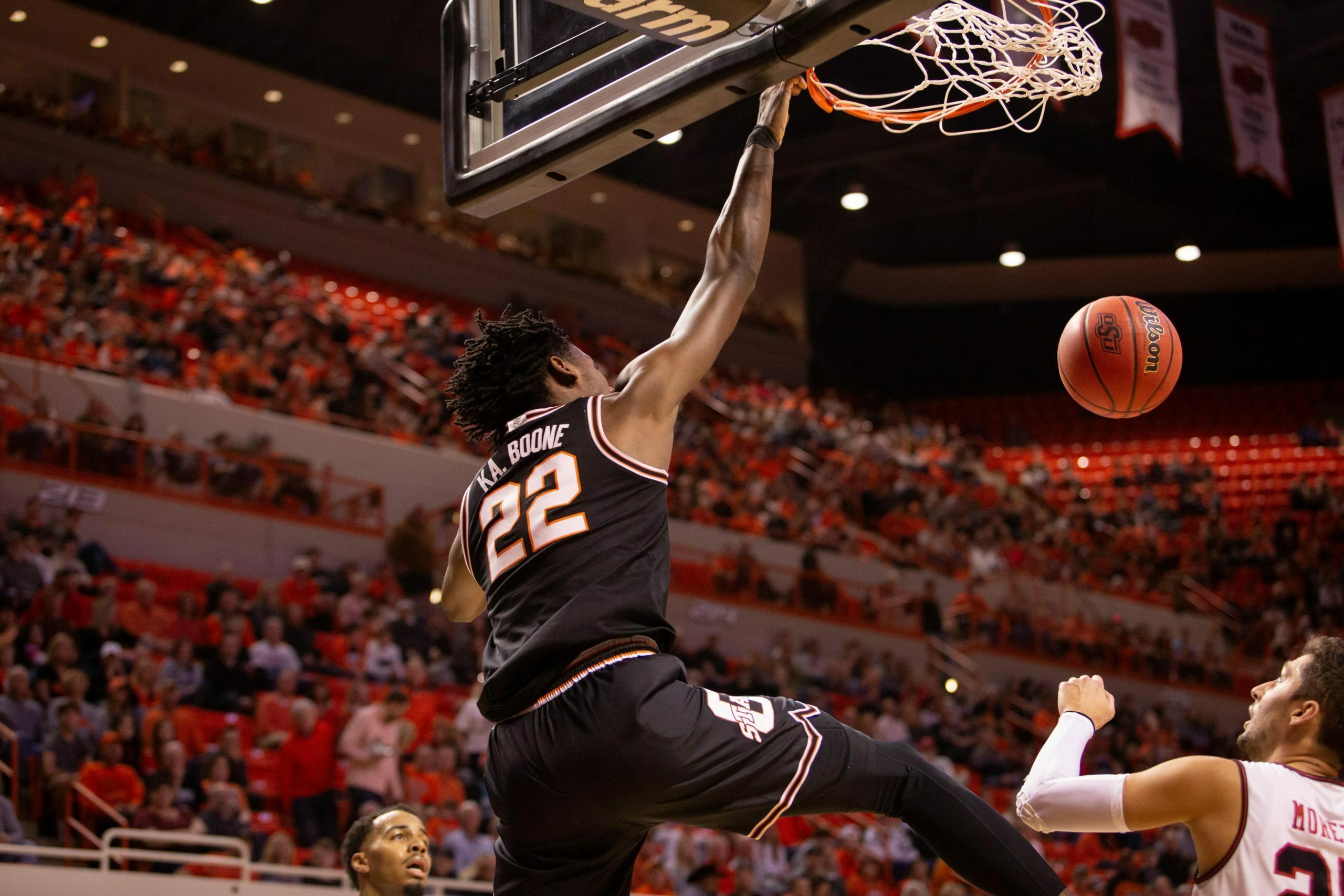 STILLWATER — The Cowboys have put together consecutive Ws for the first time since November.

Oklahoma State beat No. 24 Texas Tech 73-70 on Saturday in Gallagher-Iba Arena thanks to a 50-percent shooting outburst in the second half.

Isaac Likekele had his fingerprints all over the game, finishing with 14 points, seven rebounds and six assists. He put up 10 points in the second half.

The Cowboys did a lot of their work from the foul line, scoring 31 free ones on 38 attempts. Related: the Cowboys shot just 10 3-pointers, seven of which came in the first half. It’s a new philosophy Mike Boynton spoke on earlier this week that was also deployed when the Cowboys beat Kansas State in Manhattan on Tuesday.

Saturday’s biggest benefactor of the new attack-oriented Pokes was freshman big man Kalib Boone. Boone scored a career-high 16 points despite recording just four field-goal attempts. He was 12-for-14 from the foul line.

The last 10 minutes of the game were mesmerizing. OSU trailed by five at the 10-minute mark and proceeded to make their next seven buckets in a row to go up 66-62 on the Red Raiders. Improbably, they missed their next eight attempts but closed the game out at the free throw line.

The ending was not without its moments. After Boone swatted away a shot with 30 seconds to go and the Pokes up three, Waters grabbed the rebound and immediately coughed it up to Tech seconds before committing a foul and giving Tech two free throws.

A series of traded free throws by both teams eventually (somehow) ended in a three-point victory for OSU. It was exciting, great basketball on a day when OSU honored a 1995 that was one of its most exciting and best teams in history. The entire thing, especially when contrasted with the rest of the year, was a thrill.

Jonathan Laurent added 16 points and seven boards for the orange and black while Cam McGriff chipped 10 points and nine boards. As I noted earlier, OSU shot 50 (!) percent from the field in the second half. The craziest part about that? Tech shot 54 percent.

The win puts the Cowboys in an interesting spot as they head down the stretch. The Pokes have six games before the Big 12 Tournament, and games against Oklahoma, Iowa State, Kansas State and Texas all seem more than winnable at this point.

This was the first ranked win the Cowboys had this season, but they’ll get a chance for another Tuesday as they head to Morgantown to play No. 14 West Virginia as they look for three consecutive Ws as March draws nearer.