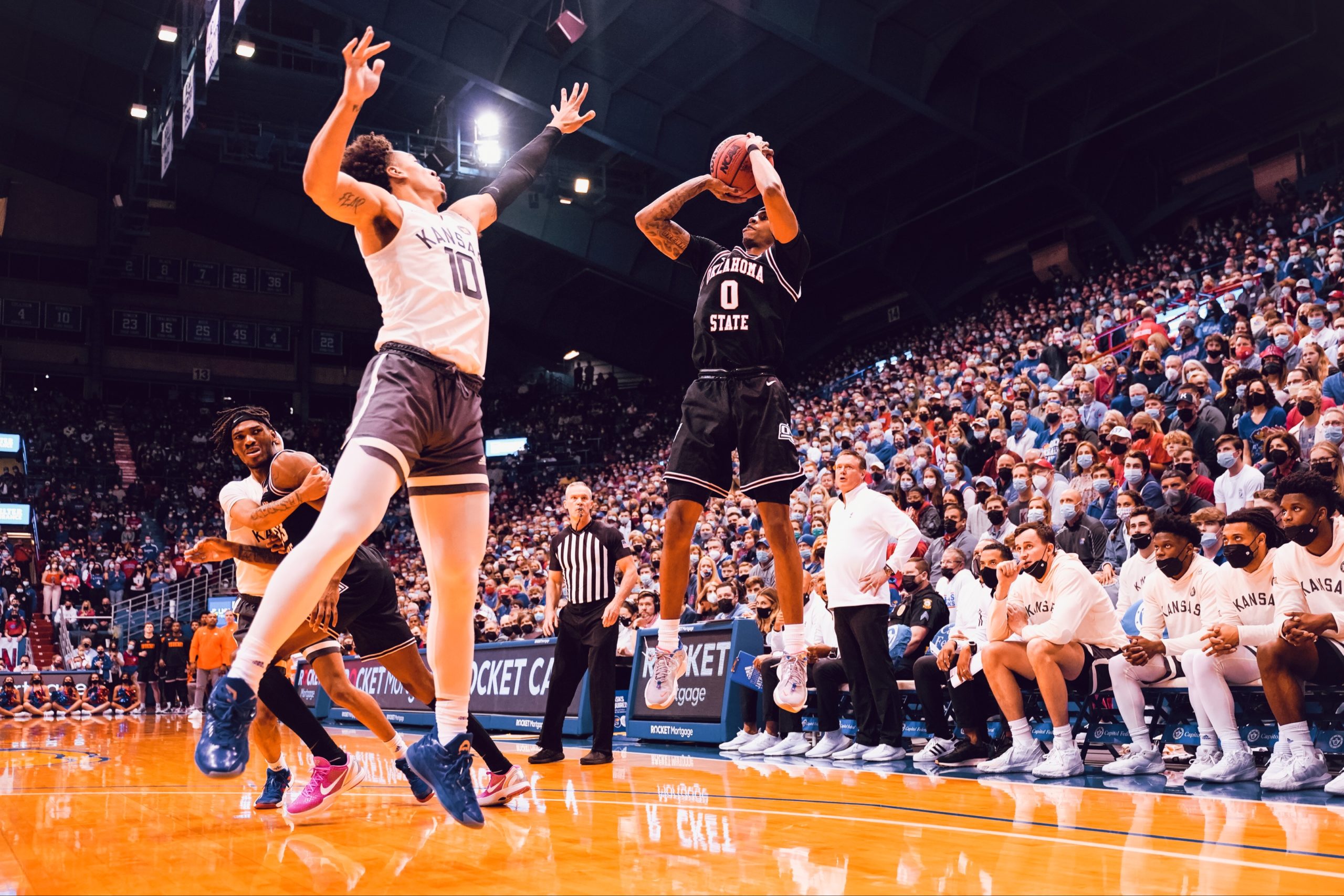 When OSU’s offense is rolling, it’s not exactly pretty. When KU’s isn’t, the Jayhawks still looks pretty good. Those contrasting styles met up in Lawrence on Big Monday, and it didn’t go well for the road team.

Just two days after tying a Big 12 season high with 81 points in a win over West Virginia, the Cowboys mustered just 62 points, and several of those came in garbage time after Bill Self had emptied his bench. Neither team shot over 40 percent from the field or 25 percent from the 3, but that is not how it played out to those watching.

OSU’s defense gave the KU fits after going down 10-4 early, and the Cowboys were able to make some hay in the paint. Moussa Cisse capped a 7-0 run that saw the Cowboys take a one-point lead midway through the opening period.

That lead lasted all of 22 seconds, and the Cowboys were playing from behind from then on.

Kansas missed its first seven 3-point attempts but then made four-straight. That was enough to push the lead to nine, and the Jayhawks were able to keep the Cowboys at arm’s length until the break. The Cowboys, on the other hand, missed all six 3-point attempts in the first and finished 3-of-17 from deep. OSU fell behind by a dozen and trailed 38-28 at intermission.

The Cowboys were able to keep it competitive during the early goings of the second half, cutting a 16-point lead back to within 11, but KU used an 13-0 run to go up 61-37, and the Cowboys just can’t score easy enough to dig out of a hole like that, especially in The Phog.

The Pokes may not have the scoring punch the Jayhawks do, but they’re not short on gumption. OSU was able to string together a 9-0 run to pull within 68-51 in the last seven minutes and pulled back within 14 thanks to an 8-0 run over the final two minutes.

Avery Anderson led OSU with 15 points, but he earned them the hard way, going 5-for-15 from the field and 1-for-4 from 3. He dished out four assists to four turnovers.

Bryce Thompson didn’t shoot the ball particularly well in his return to Allen Fieldhouse, but he hit double digits, scoring 11 on 12 shots. Moussa Cisse was close to logging his second-straight double-double, scoring eight points on five shots and grabbing 11 rebounds, including OSU’s first seven boards of the game.

Meanwhile, Kansas’s entire starting lineup scored in double digits, led by the Big 12’s top scorer Ochai Agbaji who had 20 on 12 shots and was 9-of-10 from the free-throw line.

OSU was out-shot at the charity stripe 27 to 14. Not bad for a game in Lawrence, to be honest, but it wasn’t close enough late enough to come down to free ones.

Next up, the Cowboys are back home on Saturday where they’ll host Kansas State at 1 p.m.