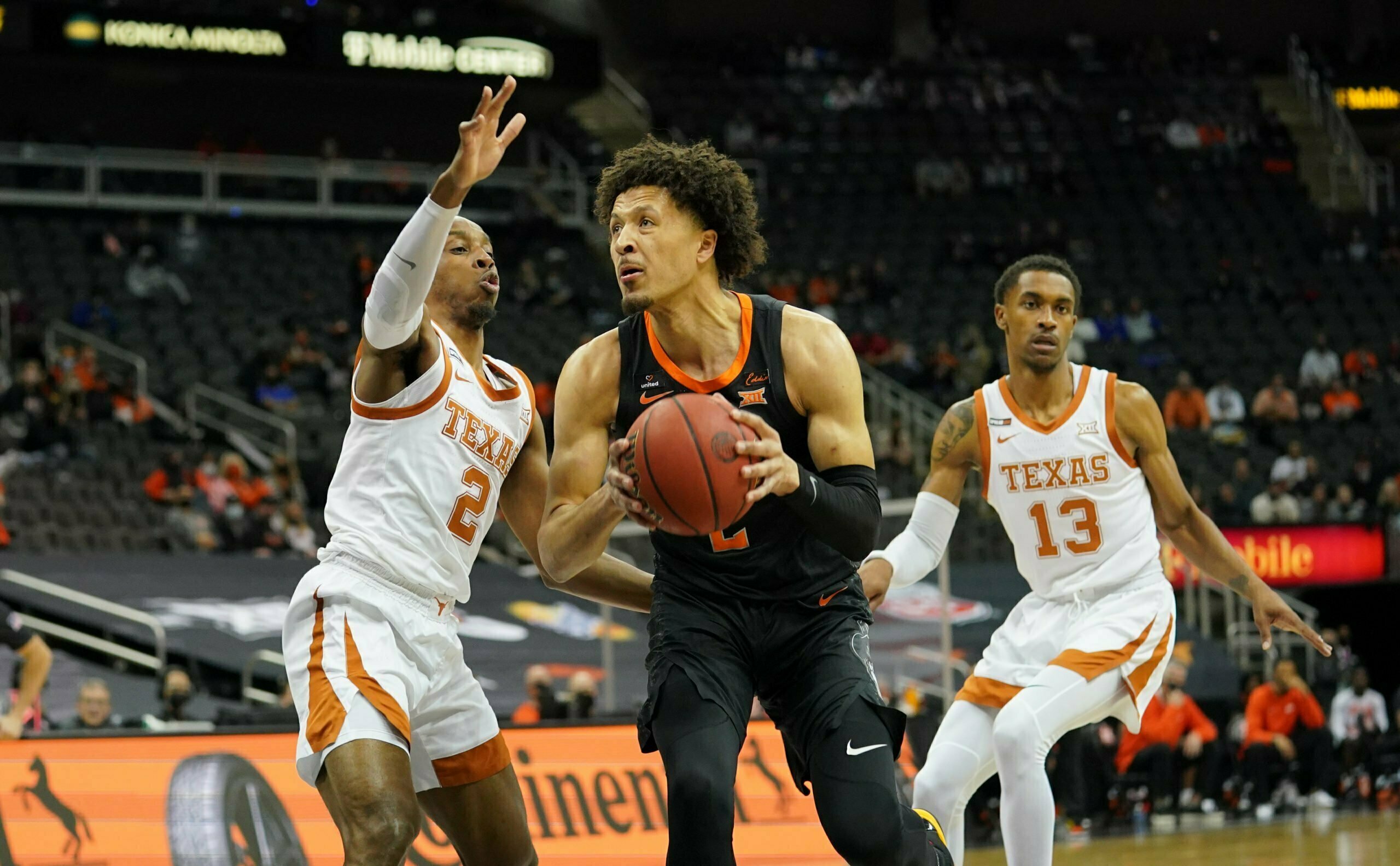 Cade Cunningham scored 29 points making big 3 after big 3 in the second half, while five Cowboys scored in double digits. But it wasn’t enough to take home a Big 12 Tournament trophy.

The Cowboys didn’t come out quite as fast they did against Baylor the night before, and they seemed to be feeling the effects of a hard-fought run through the bracket. Maybe three games in three days was catching up with them. Maybe the unplanned Friday night off gave the Longhorns a little more juice.

OSU missed all nine of its 3-point attempts in the first half and shot 42 percent from the field. The Longhorns, who got to sit and watch on Friday night as the Cowboys ran all over Baylor, flipped the script on the Pokes owning a 13-4 advantage in fastbreak points in the first half.

The Longhorns bothered the Cowboys with their length and a heavy dose of pressure defense. It was a smart strategy from Shaka Smart against the fatigued Cowboys.

Cade picked up his second foul less than seven minutes into the game and had to be careful. He wasn’t quite careful enough. With over five minutes left before halftime, Cade was whistled for a block attempting to draw charge on a driving Andrew Jones.

Matthew-Alexander Moncrieffe gave the Cowboys a much-needed spark in the second half, and OSU started to show life.

Then Cade scored five straight with a couple of free throws and what has become his signature, the second-half stepback to pull the Pokes within four with 14 minutes in the half.

Then Rondel Walker turned it into a 7-0 run to pull OSU within two, but that was the closest the Cowboys would get in the second half.

Texas surged back, pushing the lead back to double digits multiple times. OSU fought back to within striking distance several times and but was never quite able to get over the hump despite some late-game heroics.

Both teams were in the bonus for almost the final 10 minutes of the game, which turned it into a free-throw contest down the stretch. And that’s a tough row to hoe if you’re trying to play catchup.

But the Pokes never stopped fighting.

Kalib Boone was fouled 80 feet from the basket and rattled in both free throws to pull the Cowboys within 81-75. Then Avery Anderson stole the ensuing possession and hauled tail down the court with a chance to cut it to four, but he lost control of the ball out of bounds.

Anderson fouled out on the next possession and the game’s leading scorer, Matt Coleman, knocked down both free throws, 83-75.

Cade Cunningham split a double team and then stepped to the side and nailed a midrange jumper to pull within six with 1:01 left, but it was not enough.

Cade rushed down the court and threw in another 3-pointer to cut it to 89-86, but the Pokes had to foul to stop the clock. Andrew Jones iced it with two more free throws.

The Longhorns went 21-of-27 in the second half and doubled the Pokes on trips to the line. OSU went 13-of-17 while Texas shot 28-of-36 from the charity stripe in the game.

The three games in three days, including a blazing first half and strong finish against Baylor last night, seemed to have caught up with the Cowboys. But they should be plenty rested for the Big Dance come next week.

The Cowboys will eagerly await their NCAA Tournament seeding announcement Sunday night. Keep it here for all your postgame coverage and Selection Sunday coverage.