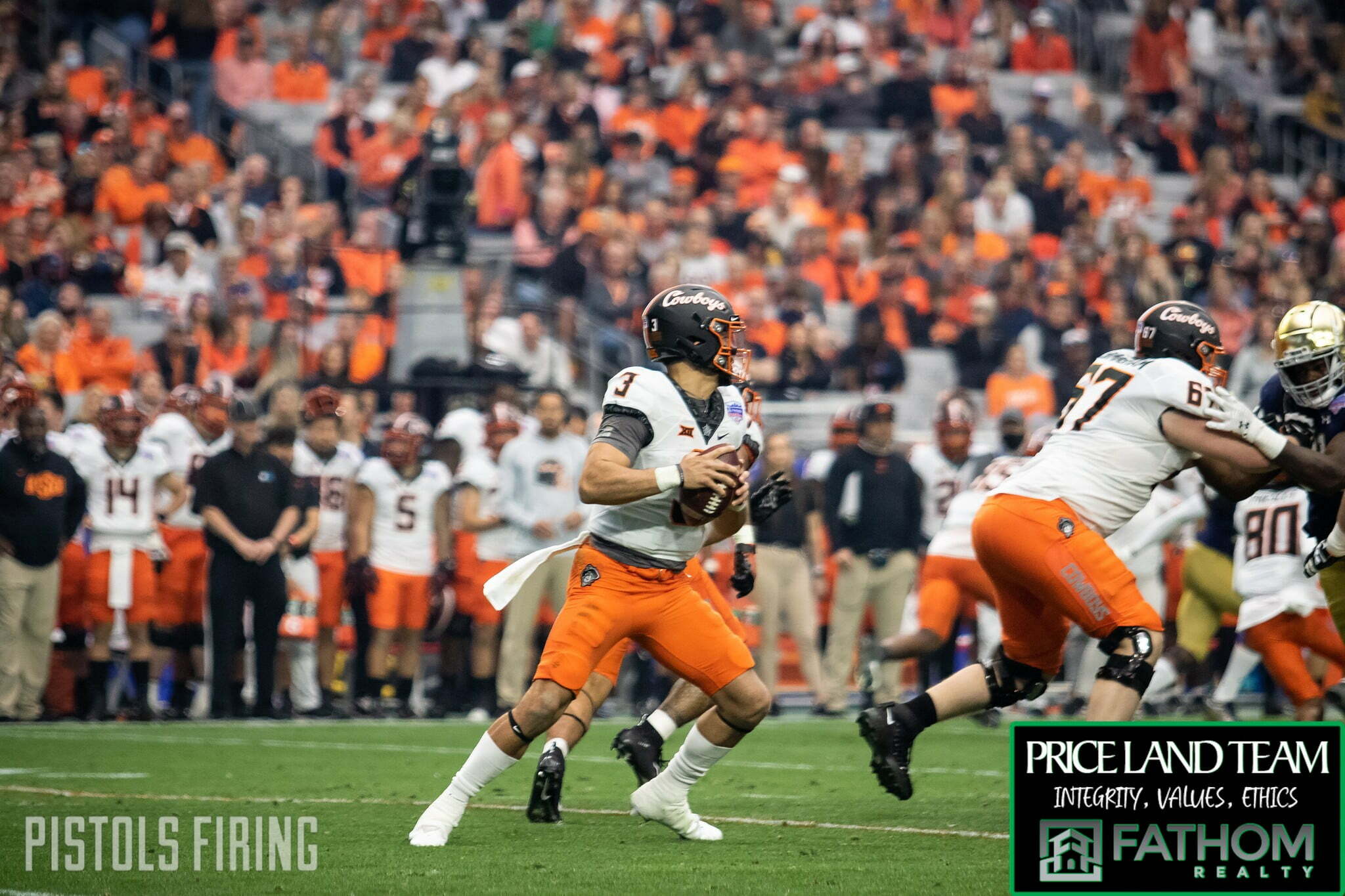 No. 9 Oklahoma State overcame a three-touchdown deficit to defeat No. 5 Notre Dame 37-35 in the PlayStation Fiesta Bowl.

Spencer Sanders led the Cowboys (12-2) back from a three-touchdown deficit. The Cowboys dug themselves out of a 21-point hole to score 30-straight, marking the largest comeback in OSU history.

But it was all Notre Dame early.

With about a minute left in the first half, the Cowboys found themselves down 28-7 after Notre Dame quarterback Jack Coan threw his fourth touchdown of the game. Minus their leading rusher Kyren Williams and against a stout OSU front, the Fighting Irish swapped out their ground game in favor of the short passing game, and it worked.

OSU’s defense had few answers for Coan in the first two quarters. At halftime, he was 24-of-33 for 342 yards and four touchdowns. He finished the game with career highs of 509 pass yards and five touchdowns. But he also threw just his seventh interception of the year on a nice play by Malcolm Rodriguez late in the fourth quarter.

Facing a three-touchdown deficit and with 1:16 left in the first half, Sanders and Co. made up 75 yards and found pay dirt in just four plays and 39 seconds.

OSU would pull within seven with another touchdown drive to start the third quarter. The Cowboys offense went tempo in the second half and the Irish never caught up. The Pokes either scored or made it to the red zone on eight of nine second-half drives. Two of those ended with fumbles, including a strip at the goal line.

And when the Cowboys offense finally got going, its defense kicked it in gear as well.

(Is there any other kind?)

Deep in field goal range and with a chance to seal the win, Sanders took off to his left and picked up three yards but the ball was stripped. The play was originally called dead with Sanders down but after review it was ruled a fumble recovered by the defense.

Notre Dame had the ball back with 3:07, down six and with 85 yards to go. But OSU’s defense did what it has all year and got a much-needed stop. Jack Coan missed three-straight passes, turning the ball over on downs. Tanner Brown knocked in the 25-yard chip shot to give the Cowboys a 37-28 lead. Brown missed his first attempt from 48 yards, but went 3-0 off his foot after.

Notre Dame drove down the length of the field, without any timeouts remaining, scoring a touchdown with just 1:11 coming off of the clock to pull within 37-35. It was the Fighting Irish’s first score in 30:11 of game time.

All the Cowboys had to do was successfully receive the onside kick. Jason Taylor, who may have the best hands in OSU’s secondary, snatched the ball with one hand before it went the required 10 yards and effectively ended the season.

Sanders finished 34-for-51-for 371 passing yard and four scores (both season highs) and added a career-high 125 rushing yards. Most importantly, he kept his cool when his team was down big and then led them to victory.

Brennan Presley led the Cowboys with 137 receiving yards on 10 catches. Tay Martin added 10 grabs for 104 yards and three touchdowns, which tied a Fiesta Bowl record for TD grabs. Jaden Bray turned his one touch into a touchdown.

In his return, Jaylen Warren did the dirty work, chewing up 82 yards on 19 carries and was blitz-beater for Sanders, hauling in six of his seven targets for 34 receiving yards.

In his final collegiate game, Malcolm Rodriguez grabbed 11 tackles, that late interception and recorded two pass breakups and a QB hurry. The other half of OSU’s LB duo, Devin Harper, added 10 more tackles and a tackle for loss. Brock Martin tied a career-high with two sacks and added a QB hurry.

The 21-point deficit the Cowboys overcame was the largest in school history, beating out the 20-point comeback against Colorado in 1979. Before Saturday, Notre Dame was 79-0 since 2004 when going up by at least 21.

Oklahoma State finishes its season 12-2, tying a program record for wins set by the 2011 Cowboys team that also won a Fiesta Bowl.