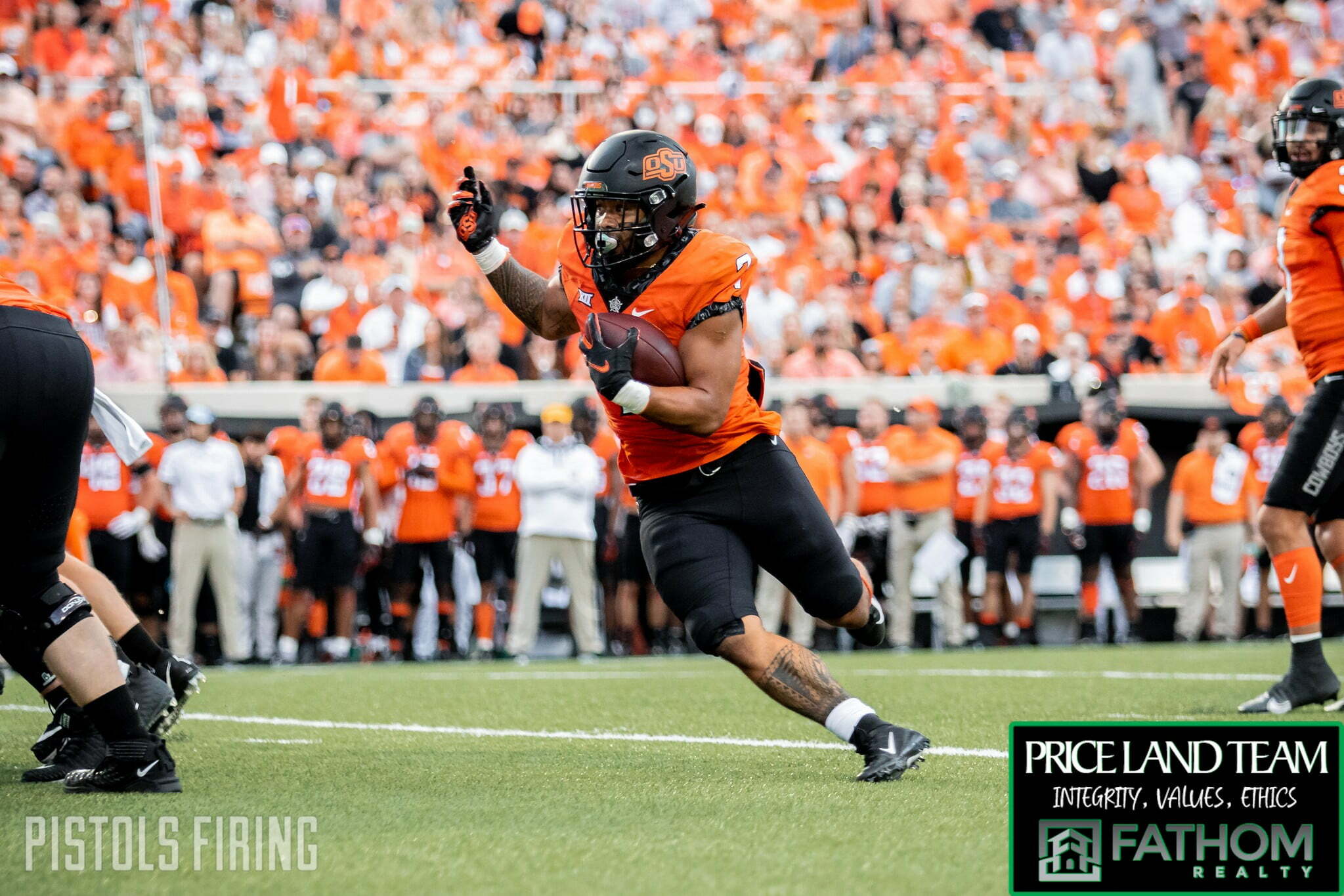 Oklahoma State led from wire-to-wire and didn’t allow the Bears (4-1) to score until the waning moments of the third quarter. But a game that the Cowboys (5-0), seemingly, could have put away by half time turned into a defensive slugfest thanks to the Pokes leaving points on the field.

On the opening drive, OSU’s offense was reminiscent of the type of production that we got used to when the 2011 Cowboys were running it up on Big 12 foes. That team was honored on Lewis Field at half time and must have taken back some of that early mojo because OSU didn’t score again until the fourth quarter.

On the first offensive play of the game, Jaylen Warren bounced left and went for 21 yards, setting the tone for the Cowboys’ first scoring drive — and he never slowed down. Warren finished with 36 carries for 125 yards and two touchdowns. It was his third-straight game with at least 100 rushing yards.

Tay Martin was also active on Saturday, hauling in seven catches for 108 yards. Rashod Owens added three for 53 yards and a score.

But for as good as the Cowboys moved the ball on the vaunted Baylor defense early, they left a lot of points on the field. Spencer Sanders had a bad interception from the Baylor 18-yard line, and on the next possession a trick play that Tay Martin reeled in at the 12-yard line was called back due to a flag for ineligible receiver down field. There are more examples to come. Following that first TD drive, OSU’s next two possessions ended with interceptions and the next two ended with punts.

One week after his best outing of the year against Kansas State, Sanders finished 13-of-23 for 182 yards, a TD and three interceptions. But he also added 76 much-needed yards on the ground.

OSU’s defense was, once again, the steadying force for the Cowboys. They held Baylor QB Gerry Bohanon to a season-low completion percentage (13-of-27) and just 173 yards with no scores.

After seeing his offense give it away three times — and watching his defense shut out the Bears in the first half — Mike Gundy looked content to play the possession game for the final two quarters. Unfortunately, the Bears didn’t cooperate.

Late in the third quarter, after it looked like OSU’s defense had once again gotten the ball back for its offense, Baylor went to a toss play on fourth down and caught the Pokes off-guard.

If there’s one thing you can say about Sanders, he seems to have a short memory. After his third interception — a ball which passed through the hands of Rashod Owens and bounced into the air off of his facemask, Sanders captained another long drive down the field with dart-after-dart to Tay Martin. The final one should be on SportsCenter tonight.

OSU would have to settle for three after stalling at the goal line. That gave the Cowboys a 10-point lead just seconds into the final period. But the Bears wasted little time, answering with a seven-play, 84-yard drive, scoring a touchdown in just under three minutes to pull within 3.

After its offense came up empty, OSU’s defense made yet another dramatic stop. Baylor went for it again on fourth down, but this time the Cowboys were ready.

Penalties almost made the difference late in a tight one, both ways.

Down three and about to gear up for a third down play on defense, Baylor gifted the Cowboys a first down when Sanders went out of bounds on the Baylor sideline. The ensuing scrum of Bears gathering around him ended with a flag for unnecessary roughness to cut the field in half. But then a Braden Cassity hold pushed the Pokes back off the goal line. Facing third-and-12 Sanders’ big run was this close to converting on third down (bad spot), which would have sealed the game.

OSU opted to go for it on 4th-and-2 from the 4-yard line and Jaylen Warren paid it off putting a bow on his big day.

OSU has shown flashes of offensive prowess but either by self-inflicted wounds or stumbles, they’ve yet to put together a full game. Fortunately, its defense has yet to take a quarter off.

The Cowboys forced five three-and-outs, allowed the Bears just three conversions on 15 third-down attempts and held them to just 280 total yards and a season-low in scoring.

After totaling just one interception in three games coming in, Sanders threw three picks on Saturday, tying the career-high which he set against Texas Tech in 2019. OSU’s defense followed each of those turnovers up by forcing a three-and-out.

Next up, Sanders and the Cowboys head into a much-needed bye week. They’ll be back in action on Oct. 16 with a trip to Austin to face the Longhorns.