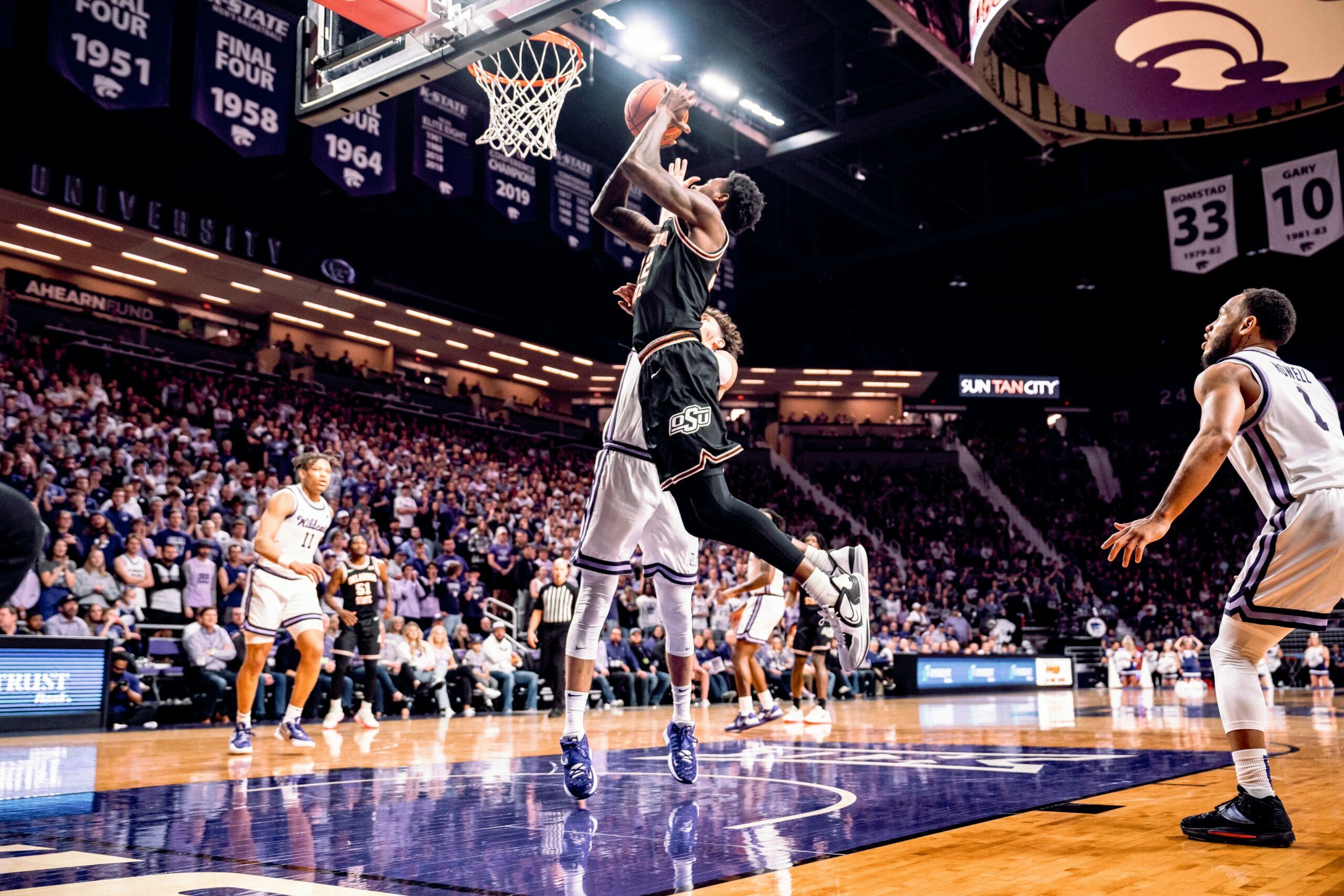 For the second straight game, a shorthanded Oklahoma State team went toe-to-toe with a Top 15 team and gave itself a chance to win it late. But in consecutive games, the Cowboys came up short.

Oklahoma State fell to No. 11 Kansas State on the road 65-57 despite a career-high in scoring from Kalib Boone and a season-high by Caleb Asberry.

Kansas State came in ranked third in the Big 12, scoring 79.7 points per game and shooting 47.9 percent from the field. The Wildcats had scored 116 and 97 in their last two. But the Cowboys held K-State to 65 points on 36 percent shooting.

It was a first half full of runs. (It was a game full of runs). An early OSU 9-0 run included back-to-back 3s by Asberry, but the Wildcats followed with their own 9-0 run before the Cowboys rattled off 11 straight to take back the lead. Each team turned it over nine times before half, but the Cowboys held the Wildcats to just 32 percent from the field in the first, but not before Cam Carter nailed a 3-pointer at the buzzer to pull Kansas State within 32-30.

But the Cowboys went cold in the locker room. After shooting 45 percent from the field in the first, OSU started 1-for-12 in the second half while the Wildcats rattled off 10 straight points.

Meanwhile, the Cowboys shot just 8-for-35 from the field in the final frame. But despite abysmal shooting in the second half, the Cowboys were able to inch back into the game with second-chance points and from the free-throw line.

After trailing by 10 with seven minutes to go, Kalib Boone and Caleb Asberry made four straight charity shots before Boone’s backdoor dunk pulled the Pokes within four with four and a half minutes to go.

Then a Chris Harris 3 made it a one-point game with under four minutes to go. The Cowboys were down just three with 66 seconds left, but a turnover here and a missed shot there and they quickly found themselves behind in the foul game. The Wildcats took a five-point lead with a lob dunk from Nowell to Johnson with 38 seconds left and then went 3-for-4 on free throws down the stretch to secure their ninth-straight win.

Boone followed up his double-double against Texas with a career-high 23 points, three rebounds, two blocks and two steals. Boone was 5-for-6 from the line. Asberry had his high-scoring outing as a Cowboy, pouring 15 points on 11 shots. He was 3-for-7 from deep and added five rebounds, two assists, a block and a steal with just one turnover in 27 minutes.

Asberry got the nod over Avery Anderson late, who Mike Boynton said is dealing with a wrist injury. For consecutive games without the scoring of Cisse available, the Cowboys’ leading scorers struggled. After scoring five each in the loss to Texas, Bryce Thompson and Anderson combined for just five total. Anderson was scoreless shooting 0-for-3, and Thompson had a tough night going just 2-for-13.

Without the league’s top rebounder, OSU held its own, tying the Cats at 42 each on the boards and out-rebounding them on the offensive glass 15-14. Somehow, the Pokes scored 16 second-chance points to the Wildcats’ zero and still came up short.

While OSU was able to hit a string of free throws in the second half, the way things ended helped contribute to a lopsided 19-9 free throw disparity. But the Cowboys were 8-of-9.

There is some reason for enthusiasm if a Cowboy fan were so inclined. OSU could very well have won either of these Top 15 matchups if just one of its three best players were healthy or not in a sudden rut. If Cisse comes back and 100 percent, that makes a huge difference.

With the loss, the Cowboys fall to 9-7 on the season and 1-3 in Big 12 play. Next up, the Cowboys head to Waco this weekend. They’ll take on Baylor at 5 p.m. Saturday.