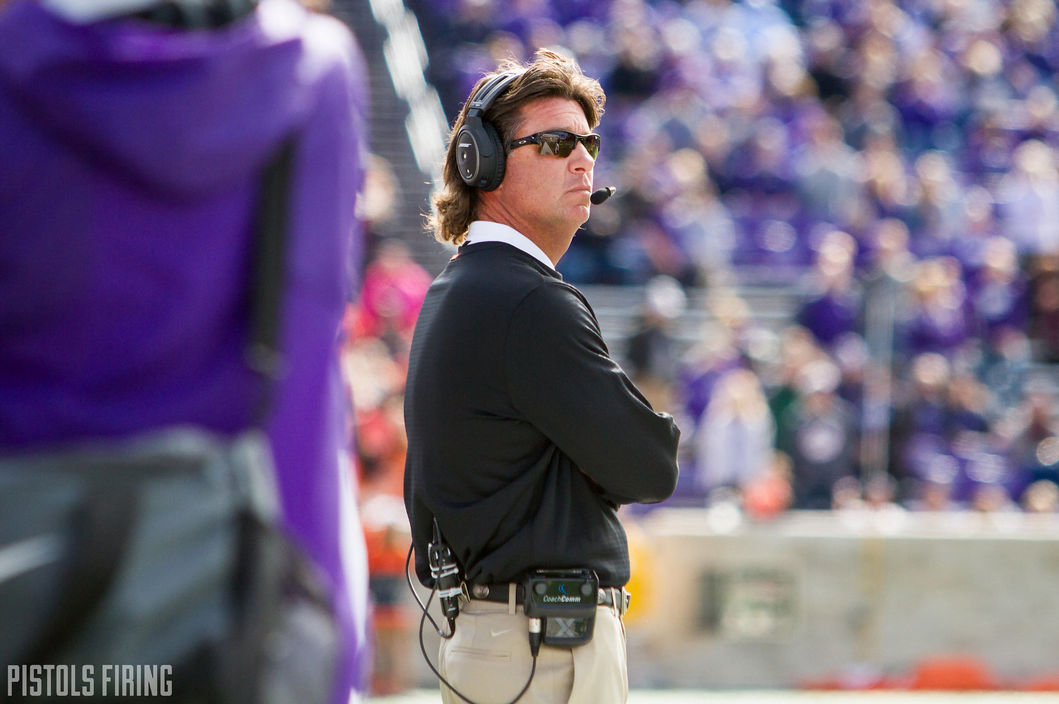 We expected a slugfest, but instead what we got was a M*A*S*H unit brawl.

A wounded Oklahoma State team survived in Manhattan by scoring 20 unanswered points in the second half, but it wasn’t easy.

It was all Wildcats early.

After each team traded opening three-and-outs, Kansas State got on the board first after marching down the field all the way to the Cowboys’ 12-yard line. OSU’s defense dug in its heels and held the home team to a field goal. This would become a trend.

The Wildcats won the first two quarters 12-0, outgained the Cowboys 217 to 83 and owned third downs, converting half of their 10 attempts, while limiting OSU to 1-of-7.

When Kansas State scored its first touchdown to go up 12-0, the Wildcats attempted a 2-point conversion that was unsuccessful. That decision would come back to bite them.

While its offense struggled to get anything going, OSU’s defense produced three-and-outs to keep the Wildcats within striking distance.

The Cowboys entered the game minus their top receiver Tylan Wallace and their top ballhawk Kolby Harvell-Peel. Then, on different occasions, Spencer Sanders, Chuba Hubbard, LD Brown and Teven Jenkins all came up limping.

Still, battered and bruised, the Cowboys offense clawed back. It wasn’t about pretty. It was about survival.

OSU outgained Kansas State 147-25 and went up 13-12 in the third, despite Chuba spending the majority of the second half on the sideline.

But credit the win, and the final OSU score, to the Pokes’ defense.

On another trip to the red zone for the Wildcats, Will Howard’s ball was dislodge by Israel Antwine. Jason Taylor II was in the right place at the right time, and he knew what to do.

Kansas State would answer with a touchdown of their own and, again, go for 2. Once again, the ‘Cats came up short. But after forcing a three-and-out, they would get one more chance with just over two minutes remaining.

Fittingly, it was the Cowboys defense that put things away.

Another Howard turnover, another coffin nail for the home team. OSU’s defense saved the day, again.

Behind an increasingly-wounded offensive line, Spencer Sanders mustered just 108 passing yards and no scores. He came this close to a couple of turnovers but spent most of the game under pressure, if not running for his life.

Despite being reported out prior to the game, LD Brown was OSU’s leading rusher. With Chuba banged up for most of the second half, LD brought both the thunder and the lightning.

He broke loose for plays of 50 and 23 yards but had plenty of tough runs in between. He tied a career high with 110 rushing yards and averaged 7.3 per carry.

In Tylan’s stead, Dillon Stoner led the way with 62 yards while catching seven of his nine targets. He was the Cowboys’ receiving threat for most of the game.

Next up, a bye could not have come at a better time for Oklahoma State. The Cowboys have a week off to get as healthy as possible before a trip to Norman to face the surging Sooners who’ve won four straight.