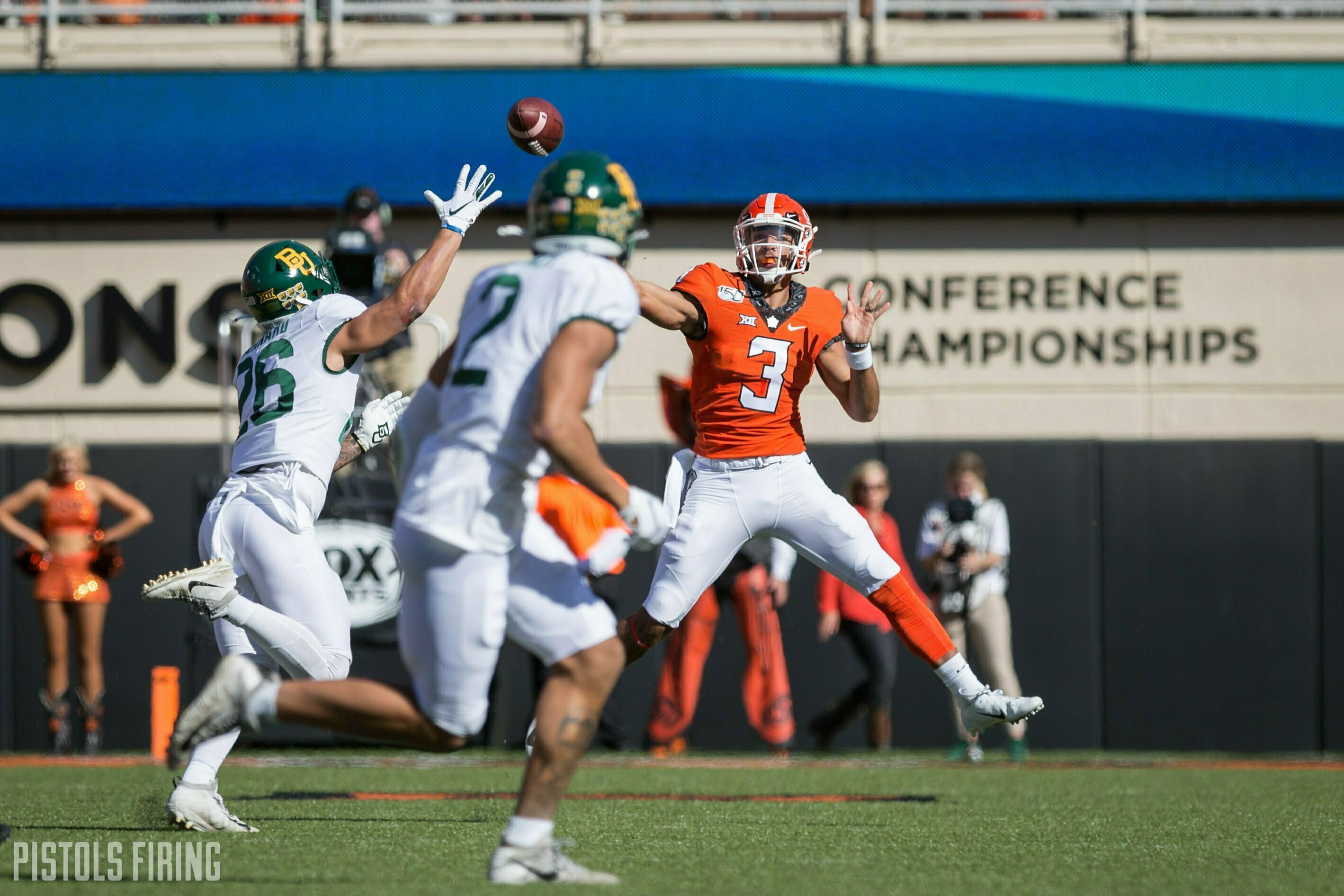 Despite the two weeks of preparation and the promise to stop losing, Oklahoma State fell to Baylor 45-27 on Homecoming weekend thanks largely to a haunting trend of turnovers.

After taking a 27-24 lead early in the fourth quarter, the Cowboys gave up 21 unanswered points to the Bears. Here’s how it happened, but first the Cowboy leaders.

• Chuba Hubbard recorded his fifth-straight 100-yard rushing game, and his sixth in seven games so far this year, racking up 171 yards (5.3 per carry) and two touchdowns.

• Tylan Wallace was held to a season-low 69 yards on six catches. But Spencer Sanders was spreading the ball around. Ten Cowboys registered a catch.

• Sanders appeared to be in bounceback mode before throwing an interception in the end zone at the end of the second half. His problems compounded with a pair of lost fumbles in the fourth quarter. He finished with 157 passing yards (18-of-32), one TD and one interception with 31 yards rushing.

• Despite giving up about four too many chunk plays, the Cowboys defense had its moments. Four Pokes (Amen Ogbongbemiga, Kolby Harvell-Peel, Tre Sterling and Cameron Murray) put up a season-high four sacks, and all in the first half. Malcolm Rodriguez led the way with six total tackles and a forced fumble.

Each team opened the game with a three-play drive. OSU’s, hampered by an offensive penalty on the first play from scrimmage, ended with an early punt while Baylor’s, consisting of rushes of 17, 20 and 25 yards and ended with 7 points.

OSU’s defense was knocked on its heels early by Baylor’s running game — thanks to the thunder and lightning of John Lovett and JaMychal Hasty — but found its footing and even pushed back. After chewing up 62 yards of BPS turf on its first drive, Baylor only mustered 50 the rest of the first half.

The Cowboys would respond with a methodical 13-play trek downfield which culminated in back-corner fade TD from Spencer Sanders to Jordan McCray. Matt Ammendola’s first missed extra point all season made it 7-6 Bears.

After each team traded a pair of punts before the Cowboys finally got into a groove on a would-be two-minute scoring drive. Spencer Sanders was spreading the ball around and the offense was humming. But the TO bug reared its ugly head and a late interception in the end zone killed the drive.

Despite its offense leaving points on the board to end the first half, OSU’s defense forced a three-and-out to start the second. After punter Tom Hutton hit Dayton Metcalf with a 20-yard dime on a fourth-and-7 fake, the Cowboys offense paid off the brazen playcalling with Chuba Hubbard’s second rushing TD of the day to give the Pokes a 20-10 lead.

But before the Cowboy offense could finish celebrating and grab a Gatorade, it had to return to the field. In two plays and 53 seconds, the Bears picked up 83 yards and a touchdown. Another stalled OSU drive was followed by another chunk play and another TD to give the visitors a 24-20 lead late in the third and set up what looked like a dramatic fourth quarter finish.

LD Brown broke loose for a 68-yard touchdown just two minutes into the final frame to put the Cowboys up 27-24, but it was pretty much all downhill from there for the Pokes. Baylor answered with its own TD drive before the death knell, a 20-yard scoop and score by the Bears after a lost fumble by Spencer Sanders. A 73-yard TD by JaMychal Hasty just added insult to injury after OSU failed to close the 11-point gap with five minutes left.