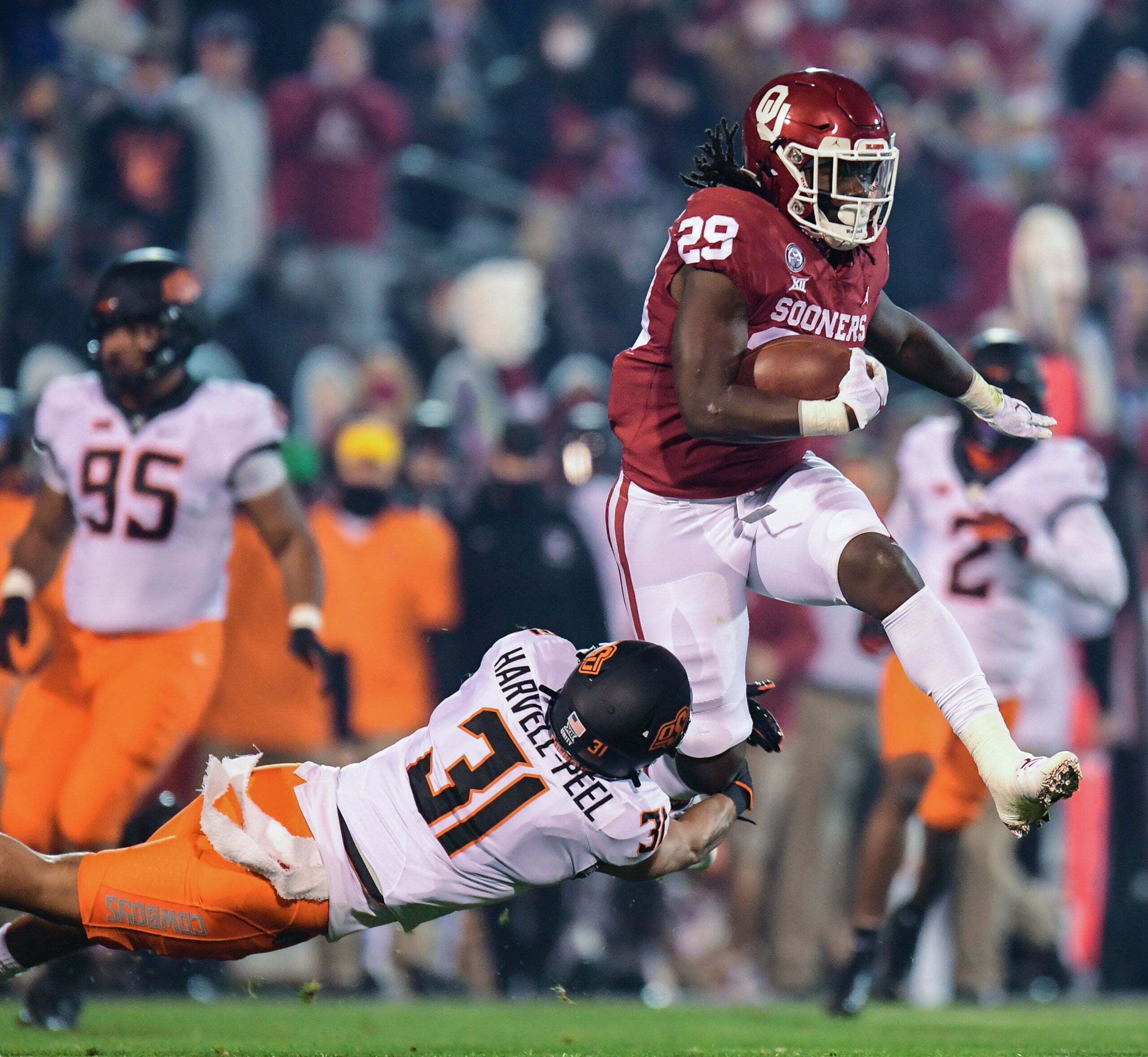 The Cowboys dug themselves the type of hole you can’t dig out of in Owen Field. Despite some moments of grit shown throughout, Oklahoma State couldn’t overcome injuries and ugliness, and fell 41-13 in this year’s Bedlam.

It couldn’t have started much worse for the Cowboys. After giving up an opening-drive to the Sooners with little resistance, the Pokes turned in their own three-and-out thanks to a pair of penalties.

OSU’s offensive line, despite returning Jake Springfield, looked overwhelmed from the jump. An intentional grounding caused by quick pressure on Spencer Sanders was followed by a false start.

The Sooners would find the end zone again before a batted-down pass — which seemed to very clearly be incomplete on replay — stood as an OU interception.

The visiting Cowboys found themselves down 21-zip just nine minutes into the game. And then things got worse.

On the next drive, Spencer Sanders was suplexed by Ronnie Perkins causing his helmet to bounce off the Bermuda and sent him to the sidelines wincing. Shane Illingworth entered the game, completed 3-for-6 passes included a touchdown gifted by Sooner defensive back Bookie Radley-Hiles, in the most Bookie Radly-Hiles way. Some extended chirping away from the play, turned a fourth down-and-4 into a first down. Illingworth found Logan Carter in the end zone, 21-7.

Another freshman OSU quarterback ready to make history in Norman? Sign me up. Unfortunately, Illingworth didn’t have the blocking or the mobility to evade OU defenders and missed 13 of his next 15 pass attempts.

The Cowboys defense adjusted. Jim Knowles’ group was able to hold the Sooners to field goals and then hold them to stops. After allowing TDs on the first three drives, the Sooners didn’t find pay dirt until the fourth quarter.

Unfortunately, the Cowboys couldn’t pay if off with touchdowns. OSU did start to sustain drives but had to settle for field goals twice in the red zone.

A 6-6 second quarter, followed by a scoreless third, kept the Cowboys within striking distance at the start of the fourth quarter — but not for long.

Less than a minute into the final frame, Spencer Rattler found Jeremiah Hill for a 30-yard touchdown to go up 34-13. Spencer Sanders returned to the game on the next possession and seemed to provide the smallest of sparks to OSU’s offense, but it was too little, too late.

Facing a 21-point deficit, facing fourth-and-8 on the Sooners’ 39-yard line, Mike Gundy chose to punt it away and trust his defense. Despite a collective eye roll in OSU’s fanbase the decision seemed to pay off, at least at first, when Tom Hutton pinned OU at its own 1-yard line.

But OU running back Rhamonde Stevenson took the handoff in his own end zone but wasn’t brought down until the 31. Stevenson wore down the Cowboys defense in the first half and then ran it over in the second.

Stevenson finished the night with 141 rushing yards on 26 carries and three catches for 54 yards through the air.

Across the field, an injury-hampered Chuba Hubbard totaled just 44 yards on eight carries. Dezmon Jackson took three handoffs 23 yards down the field and LD Brown added 10 for 23. Tylan Wallace was limited to four catches on 10 targets and 68 yards.

Spencer Sanders, who played part of the first quarter and the entire fourth, finished with 97 yards on 10-of-19 passing and an interception.

The Cowboys had several tries to cut into the lead late after getting to 1st-and-goal from the 2. But they come up empty, giving the Sooners the satisfaction of largest margin of victory in Bedlam in five years.