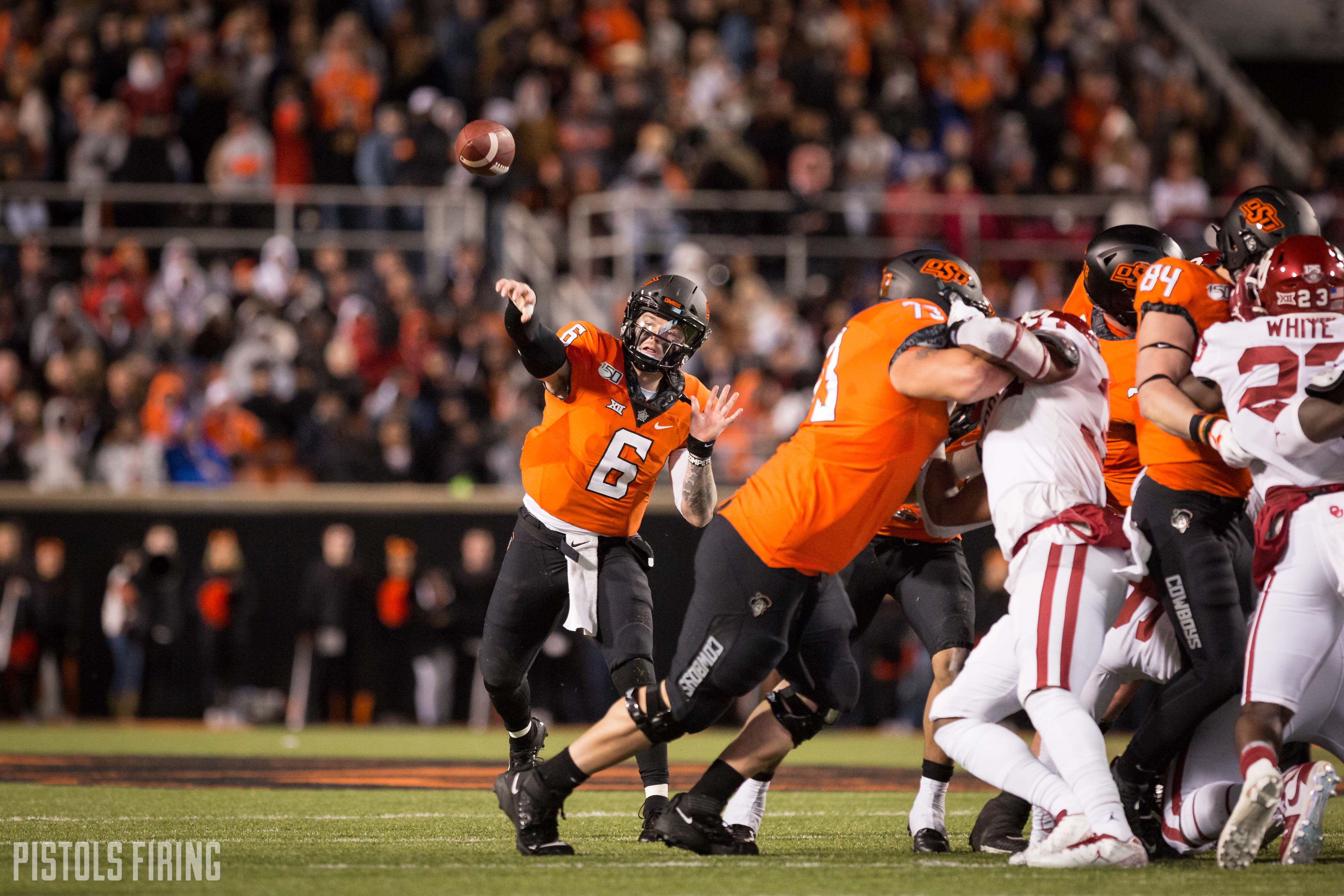 Oklahoma State stumbled in its latest run at the Bedlam trophy, falling 34-16 to Oklahoma at home.

The Cowboys may have been without their best quarterback and best wide receiver, but they didn’t look outmatched against the seventh-ranked Sooners, at least not early. OSU hung with Oklahoma for much of the first half. But a stout Sooner rushing attack wore down the Pokes. Then an inability to capitalize when the ball did bounce their way allowed the Sooners to pull away in the second half and the Cowboys didn’t have the firepower to keep up down the stretch.

Oklahoma State’s defense earned plenty of praise in its four-game win streak and on the week heading into Bedlam, but it was the OU defensive unit that shut down the Cowboys and held them to one touchdown and 3 second-half points. This was OSU’s lowest scoring output this season.

Much of the talk coming into this week was about the two Heisman hopeful rushers in Chuba Hubbard and OU quarterback Jalen Hurts. But it was Kennedy Brooks who did most of the damage on the ground, as he racked up a game-high 160 yards and a score while methodically chewing up the turf inside Boone Pickens Stadium at 7.3 yards per carry. Chuba Hubbard finished with another 100-yard game, but was held mostly ineffective by the Sooners defense in the second half.

It took the Sooners all of four plays to plant their flag on Lewis Field. Mike Gundy was right to fear Jalen Hurts’ wheels. His first rush attempt went for 28 yards and 7 points.

But the Cowboys would respond with an eight-play TD drive made official by Chuba Hubbard. After the Cowboys defense held the Sooners to a field goal, Dru Brown and company looked ready to march down the field and take an early lead before a would-be first down catch by Braydon Johnson was fumbled and lost.

The Sooners capitalized by polishing off a TD drive with a Philly Special to Jalen Hurts. To add insult to injury, Hurts threw up the patented “X” celebration, an homage to the great Dez Bryant. 17-7 OU.

We thought turnovers would play a huge role in this game, but most of the talk was about whether OU would continue its string of forcing TOs. Unfortunately, it was the Cowboys who looked intent on giving it away.

After Braydon Johnson’s fumble, Dru Brown committed the cardinal sin of throwing across his body while rolling right. An intercepted pass by Parnell Motley (which would have been his second takeaway of the game) was overturned upon review. A couple of plays later, Chuba Hubbard was stripped while doing his best Spencer Sanders in Lubbock impression. Fortunately he was able to dive on the ball. Chuba would fumble again, but it was again recovered by the home team.

Oklahoma State had every chance to pull within 3 going into intermission, but a false start by Braden Cassity, a backup D-lineman who was brought in to block, foiled what could have been a huge momentum turn. The Cowboys would settle for 3, again. 20-13 OU at the half.

The first possessions of the third quarter saw the first punts for each team. The Sooners’ followed up their’s with a six-minute touchdown drive while the Cowboys settled for another field goal.

But it was the next drive when Gundy & Co. decided not to go for 3 from the OU 27-yard line. It would have been a 44-yard attempt into some wicked wind, but it gave the ball back to a potent, yet methodical OU offense with an 11-point lead as the third quarter expired.

The fourth quarter didn’t get any less ugly for OSU. The Sooners did well to chew up yardage and clock while keep the Cowboys off the field. OSU started its second drive in the final frame with six minutes to go and down three scores.

Ultimately, the Cowboys tried to match OU touchdowns with fieldgoals while losing the turnover battle. That’s not a recipe for success in Bedlam.

In a final attempt to put stay alive, Dru Brown throw a desperation ball on fourth-and-long that was intercepted. Game over. A couple of chunk yardage rushes was enough to allow the visitors to run out the clock.

The Cowboys end their regular season 8-4 and head off into bowl season while the Sooners’ playoff hopes remain alive.