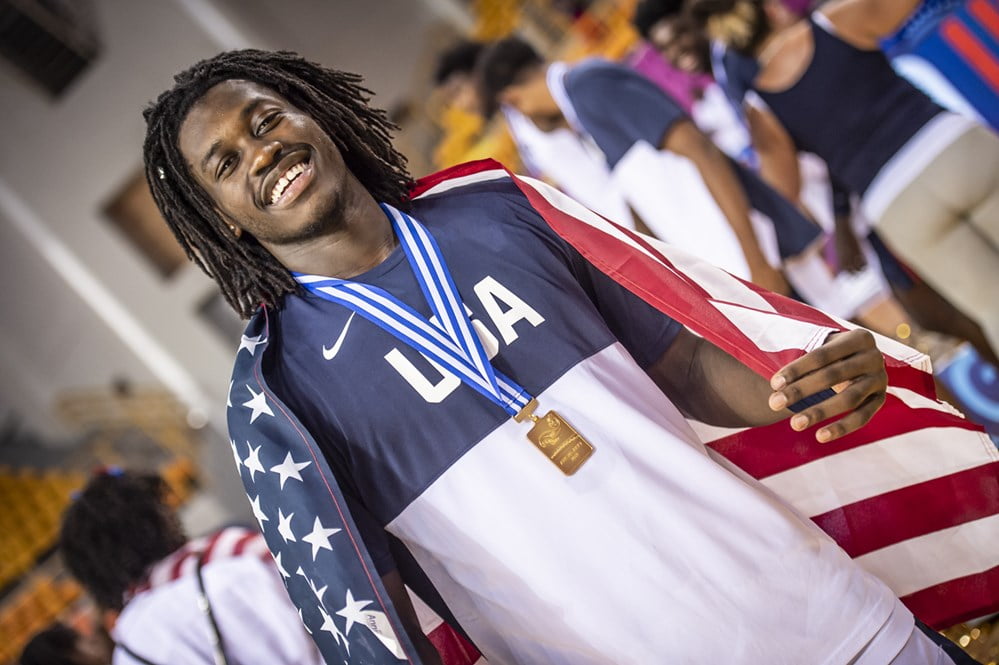 STILLWATER — After a late landing in Oklahoma City, newly crowned World Cup Champion Isaac Likekele was specifically told to not be in the gym the next day.

But as Oklahoma State basketball coach Mike Boynton got to Gallagher-Iba Arena for his 6 a.m. workout, his sophomore point guard was already there.

“Maybe it was a combination of his body clock kinda being off, too,” Boyton said Wednesday. “He might have thought it was like 6 p.m. instead. His presence means a ton to us. You can tell his energy is infectious.”

Likekele has sat out of his team’s on-court workouts since returning to America. He’s already played plenty of basketball this summer in Greece, as he averaged 8.4 points, 5.9 rebounds 3.1 assists and 1.7 steals in the USA’s seven World Cup games.

At the team’s on-court drills Wednesday, Likekele was in sweatpants and a t-shirt essentially helping coach, as Boynton tries to not overwork him.

“I don’t know how much I’m gonna need him in July,” Boynton said, “but I know I’m going to need him in January.”

It’s an adjustment for Likekele, but he made plenty of those in Greece. He played in a new system under Kansas State coach Bruce Weber, he was one of the older guys on the U19 USA Team after a season of being one of the younger guys on his team and for the first time ever, he came off the bench.

“I had never came off the bench before in my life, not even in middle school or anything,” Likekele said. “It was a different feel. I was never the type of guy to really care about starting or not, even though ironically, I started my whole life. I never really cared about starting or not. It’s important about what you’re gonna do with your minutes. You gotta be productive, whether it’s 10 minutes or 30, you just gotta manage your minutes and do right while you’re in there.”

Likekele is getting pictures taken soon with his gold medal before he sends it home to Texas where his family is going to frame it with his jersey.

“(Getting the medal) was an unreal feeling, really,” Likekele said. “It still really hasn’t hit me yet, like I’m a gold medalist. … Once they put that medal on, you’re like, ‘Man, I really did it.’ You just work so hard for stuff like that. It’s a great experience to have.”

Likekele said he and his teammates grew tight in the short period of time and that he still talks to some. One of the guys OSU fans should hope he stays tight with is Cade Cunningham, the 2020 class’ second-ranked recruit. Likekele and Cunningham are from the Arlington area, and many think Cunningham is leaning toward an OSU commitment. While Likekele and Cunningham were in Greece, Cunningham’s brother, Cannen, was named an OSU assistant.

“It was pretty fun,” Likekele said. “Cade, me and him are from the same city. We knew each other before then. We’ve never played together, but we always knew each other and talked. It was nothing new. It was two friends out there playing on the court together. It was fun playing with him. His brother’s a great guy, a great coach. I wish him a great senior year, Cade over there. I hope he has fun and balls out.”