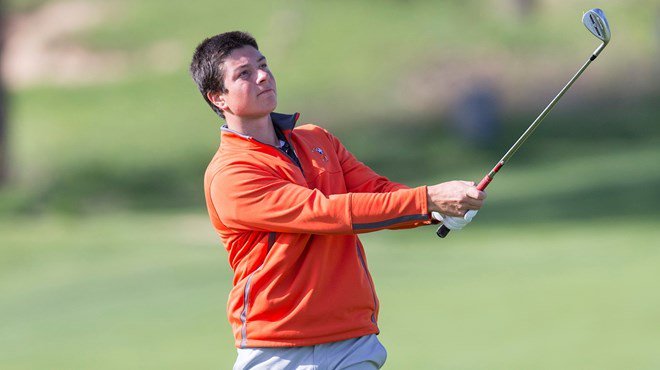 A lot happened on the weekend as Oklahoma State’s Viktor Hovland won the 118th U.S. Amateur at Pebble Beach. Hovland won with historic numbers, fired off a “Tiger who?” in the aftermath, got this great story from Ryan Lavner written about him and even got a congratulatory tweet from 18-time major winner (and 2-time U.S. Am champion) Jack Nicklaus.

Congrats #ViktorHovland! What an incredible year for you—an @NCAA title with @OSUCowboyGolf & now a #USAmateur! All before turning 21. From Norway to North Palm Beach, we are very proud of you! Also proud of @dbling65. Just 18, you went from 312 golfers Monday to finals Sunday! https://t.co/NgTl3jCuwT

“I don’t know,” Hovland said when he was asked what Holder would say to him when he gets back to Stillwater. “‘You should have won 7 and 6 (with southern drawl).'” No, I don’t know. He’s gotten soft lately.”

In all seriousness, Hovland was pretty jacked up after his win over UCLA’s Devon Bling, and the always-smiling (sometimes compared to Rory McIlroy) Norwegian struggled to contextualize the magnitude of what he’d done on Sunday at Pebble.

Viktor is feeling himself, on being compared to Rory McIlroy: “I’m way better looking than him.” ?

“I always thought I had a pretty good vocabulary, but yeah, I’m lost for words,” said Hovland, who apparently studies current events on his phone during downtime (and definitely needs to come on our podcast). “It’s really special. As I mentioned earlier, I’ve only won once before, and to win the U.S. Amateur as my second win is really cool. It’s hard to top that. So yeah, I just hope it’s the start of something great.”

As for what’s left in Stillwater for the No. 5 amateur in the world, he apparently told Joe Buck that he could play out the rest of his career (two more years). That would make sense in some ways, and he’ll certainly be back for at least one more with the 2019 Masters and 2019 U.S. Open looming.

“I remember the first time I came there and just looked at all the pictures on the wall, all the names,” said Hovland. “You see Charles Howell III, Pablo Martín, Peter Uihlein, Rickie, all those guys. You win one tournament or you finish second and you play pretty good, and then you get back there and you look at their records, and you’re like, ‘Oh, yeah, I probably shouldn’t be thinking … like it brings you more down to earth.’

“But hopefully after winning this tournament I can kind of start building on that resume, and yeah, get myself a picture on that wall.”

That, I can promise, won’t be an issue.