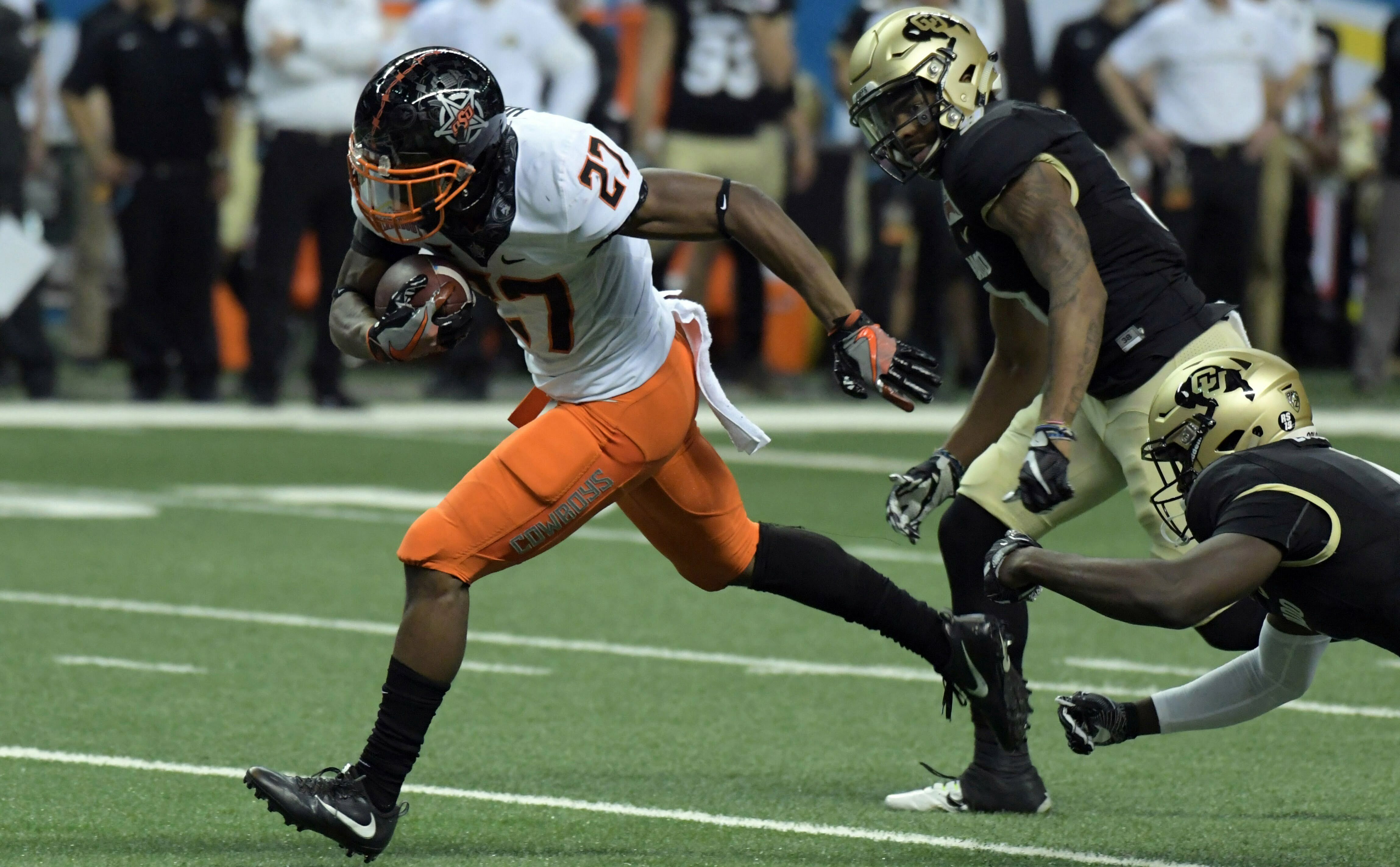 On its first three drives on Thursday night, Oklahoma State kicked a field goal and punted twice. On its next eight, it scored five touchdowns. The elixir was an amalgamation of Mason Rudolph’s brilliance, James Washington’s dominance and the one-two thumping of Chris Carson and Justice Hill. Colorado came in allowing just 1.44 points per drive which ranked No. 11 nationally. It gave up 3.45 on Thursday. There’s more! The CU defense entered the game ranked No. 16 with 31 explosive passing plays (20-plus yards gained) allowed. OSU had seven (!) on Thursday.

“It was a good secondary, we knew that going in,” said Mason Rudolph. “We felt like they hadn’t been challenged all year. Coach Gundy wanted us to take some shots, challenge them on the outside. We did that. Made big-time plays, receivers came down with it. Made my job a lot easier.”

The Buffs allowed over 300 passing yards just two other times all year and allowed over 200 just four other times. Washington nearly eclipsed the double century mark himself as he finished with 171.

“He made some great catches,” said Colorado head coach Mike MacIntyre. “We were in good position. Quarterback made some good back shoulder throws. He’s a good player. He’s done that all year long. He’s an excellent football player.”

samechols: Looks like he made up for that drop earlier ESPN Alamo Bowl: Oklahoma State vs. … https://t.co/9FYJKRu01K pic.twitter.com/6DQkA7BN59

“We had 74 total plays,” said Mike Gundy after the game. “I’m going to say probably 15 of 20 until he went out they were in man coverage. But that’s what they do. Even when they’re in a zone coverage, essentially it’s man. That’s what they live in.

“Colorado has six guys on defense that are going to get a chance to be in the NFL, whether it’s drafted or in a free agency, whatever. There are six guys being evaluated by the NFL.

“I can’t speak for them. I’m just guessing. Two of the deep balls were right there in front of me on our sidelines. James just ran right by that guy. Maybe they underestimated how fast he is. The one he dropped… He just blew right by him. It just worked for us.”

It was The President who set everything up, but then it was Justice Hill who delivered the knockout blow and kissed the Buffs a sweet goodnight as his TD run in the fourth quarter made it 38-8.

“[In] the second half, they started playing so far off, we didn’t have many opportunities there,” said Gundy. “It added to a few different things we could do in the running game.”

The freshman running back went over 100 yards for the sixth (!) time on the season (he also had 99 yards against OU) and brought his season total to 1,142 yards which is the most for an OSU running back since Joe Randle had 1,417 in 2012.

OSU ran for 4.6 yards per carry which is among the most CU has given up all season.

It was a complete and total thrashing of a solid defense by Mike & Mike’s side. It was the full-throttle offense we so often crave and so rarely get. It felt early on as if OSU was going to stall out again after punting twice in its first three possessions. It felt a little bit like a repeat of Bedlam. And then it didn’t.

“I think it just sets us up to do greater things,” said Washington after the game. “We have Marcell and all of our weapons back. I’m looking forward to coming out next year and doing the same thing, hopefully ending with a great outcome.”