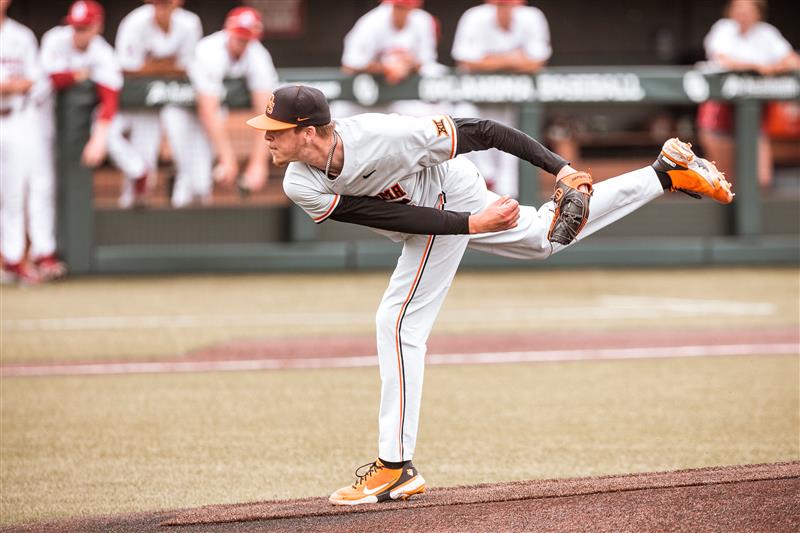 No-hitters have been a somewhat regular occurrence in Major League Baseball this season, but Justin Campbell threw just the ninth in Cowboy history Saturday.

Oklahoma State thumped Kansas 19-0 in Lawrence, as Campbell threw OSU’s first no-hitter since Joe Giordanella had a seven-inning no-no against Oklahoma in 1985.

Campbell, a second-year freshman, threw the full nine innings where he stuck out 11. He was an eighth-inning walk away from a perfect game. It’s just the third no-hitter from a Cowboy pitcher in a game that lasted nine innings.

Campbell entered the game in a comfortable spot, as OSU led 9-0 before he even got to the mound in the bottom of the first inning.

The Cowboys put up the first-inning nine-piece on six hits, none of which were home runs. Cade Cabbiness, Caeden Trenkle and Jake Thompson all had two-RBI singles in the frame.

The Pokes then put up another three in the second inning. The three runs came off back-to-back-to-back hits with an Alix Garcia RBI double, a Trenkle RBI double and a Max Hewitt RBI single.

The Cowboys’ final six runs came via home run. Hueston Morrill hit a solo shot in the sixth. Nick DeNicola and Carson McCusker hit solo home runs in the seventh, and DeNicola hit his second round-tripper in as many at-bats in the eighth when he hit a three-run bomb.

Nine OSU batters had an RBI on Saturday, with seven having multiple.

Through two games in Lawrence, the Cowboys have combined to win 31-4. The series finale is set to start at 1 p.m. Sunday.