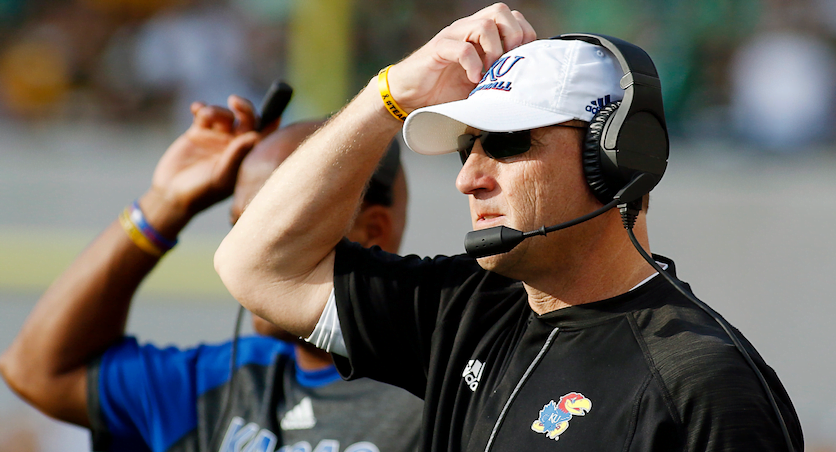 One week removed from National Signing Day, schools are already on the trail and scouring the states looking to get ahead in its 2018 recruiting class. Oklahoma State has added two commitments for 2018 in the past week alone, with linebacker Blake Barron and Nic McTear joining the OSU commitment list. The Pokes have three pledges that ranks fourth among the Big 12, and 32nd nationally.

The Jayhawks – yes, the team that won two games last season! – have the No. 1 recruiting class in the Big 12 according to 247sports.com. What an amazing thing beating Texas can do for your program! Let’s look live at head coach David Beaty for his reaction:

On Saturday alone, the Jayhawks landed, as Lebron James would say, “Not one, not two, not three, not four, not five …. ” Six! Commitments in one day. And ya know what, five of ’em are from Louisiana. On Monday, they added a sixth from Louisiana. One of which was recently offered by Oklahoma State.

While it’s still very early in the recruiting process, the Kansas Jayhawks have a top-10 class nationally. No. 9, to be exact. Ahead of Ohio State, Alabama, OU, Georgia and Florida.

And with their Louisiana ace recruiter Hull in hand, the Jayhawks may be primed to make some noise into the spring on the recruiting trail. The talent pool is deep in Louisiana, and one that mostly goes untapped with LSU all but closing the walls on the state’s best. But somehow, Kansas is already reelin’ em in with 4 four-star commitments in the past week alone. It could be a sign of things to come under Beaty, who took a notable step forward in year No. 2 in Lawrence with lesser talent.

Can he actually keep the talent committed and pull them in? It will be a question answered a year from now. But right now, he’s out-recruiting the entire Big 12. And that says something.