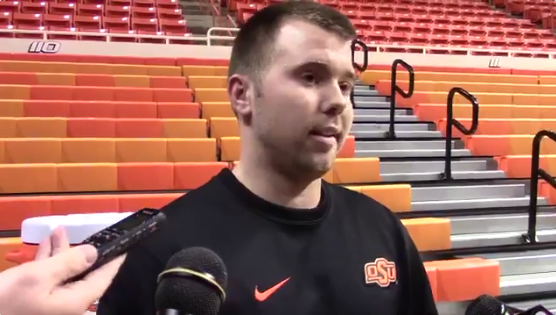 Keiton Page holds the record for the most made 3-pointers by an OSU player. Over his career in Stillwater, he made 299 of them. That record is about to be broken.

Phil Forte is sitting at 296 career made 3-pointers and the senior guard attempts 6.5 3s per game. He’s shooting 40 percent this season which means he averages 2.6 made 3s per game … Okay. Okay. We don’t need to do the math on this one. He’s going to break the record, and it could very well happen Saturday night when the Cowboys host Arkansas.

And Page, who is currently OSU’s assistant director of player development, is fine with that.

“Relentless work ethic,” said Page when asked about Forte. “My time being here I’ve played with some pretty hard workers, some gym rats. I was myself. But I’ve never seen anything like Phil. The amount of time he puts in the gym and the number of shots he puts up each day. It’s ridiculous honestly how much time he’s spent in here.”

Brad Underwood took the time to rib the former Cowboy and member of his staff.

“Keiton wants us to run spread all the time and just throw first-cutter layups to him so that he never shoots a three,” said Underwood. “We’ll have some fun in the office with Keiton when he [Forte] breaks the record.”

But Forte says he’s not worried about the record at this point.

“You know this is kind of part of it, I guess,” said Forte “I’m really just trying to focus more on getting a win. Arkansas is a very good team, NCAA tournament-type team.”

Underwood spoke on Forte’s leadership and how it’s helped the team break their six-game skid and string together their first Big 12 winning streak in two years.

“It’s been fun to watch him grow this year, ” said Underwood. “Because I’ve put different demands on him than have been on him in the past. This has become his team and part of the resurgence is him and his ability to understand that to be a leader sometimes you have to be confrontational and you can’t always be liked by your teammates. There’s a time and a place. To watch his growth in that area has been remarkable.”

That leadership and a desire to be able to leave his mark at OSU outweighs the record for Forte.

“Think we just need a win,” said Forte. “I think I’m trying to focus more on us getting our third-straight win and trying to boost our NCAA tournament resume more than trying to hit some threes.”

Sharpshooter @KeitonPage has owned the OSU 3-point record for 5 years, but he's happy that @PhilForte13 will take it soon. #okstate pic.twitter.com/PNS2u8MNsp