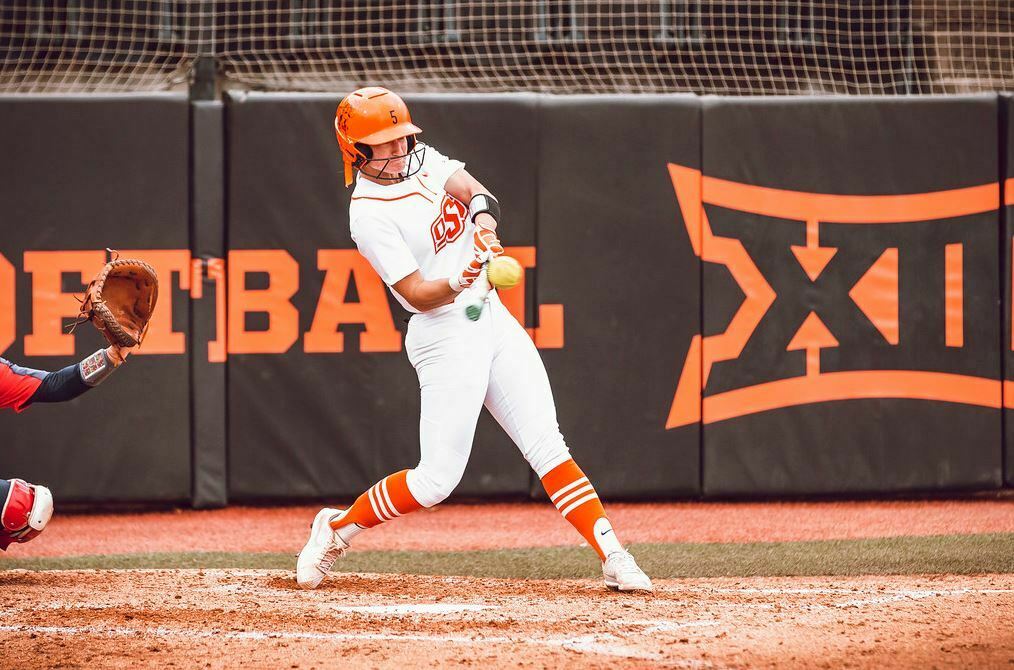 STILLWATER — The Cowgirls’ series-opener against Iowa State was lacking in offense — until the game’s final swing.

Kiley Naomi hit a walk-off home run in the seventh inning to give Oklahoma State a 3-1 victory Saturday night in Cowgirl Stadium.

“I thought she’d come through,” OSU coach Kenny Gajewski said. “I’m shocked when any of these kids don’t come through to be honest. She’s just a kid that plays with so much emotion, brings it every single day, really staring to swing a hot bat. There is nobody else that I’d want to have up there.”

OSU started the bottom of the seventh at the bottom of its lineup. Reagan Wright entered the day 4-for-41 (.098) at the plate this season but delivered in the clutch. She singled to left to allow OSU to get to the top of its order in Naomi.

“It was really cool to see Reagan, who works so hard here, to get that hit in the bottom half of the seventh,” Gajewski said.

Naomi’s swing brought the Cowgirls to 27-5 on the season and gave Gajewski his 200th career win, but it might have not played out that way without a miraculous catch from Chyenne Factor to get OSU out of the sixth inning.

Running to her left, Factor dove at full extension near the warning track and caught the ball inches off the outfield grass. The catch meant the Cowgirls were out of the inning, but had she missed, the Cyclones would’ve scored at least two runs in a game where runs were hard to come by.

“It was a huge play,” Gajewski said. “She’s a funny deal. She will not dive in practice, but I know that she can. I’ve seen her do it, and to just see her lay out and make just an incredible play was really cool. I think it gave our team a boost.”

The sixth inning started with ISU’s Mikayla Ramos dribbling a grounder to Alysen Febrey at first base. Febrey fielded the ball halfway down the baseline and attempted to tag Ramos out, but the home plate umpire ruled her safe.

Gajewski walked out to talk about the call, and the umpires convened in the infield. But, Ramos was still ruled safe. After a bunt single from Milaysia Ochoa put Ramos on second, Alesia Ranches brought Ramos home with a single up the middle.

Carrie Eberle threw her eighth complete game of the season in her 13th appearance. She allowed six hits and the one run while striking out four and walking three.

Eberle got in a sticky situation in the second but managed to cleanly get out of it. With the bases loaded and two outs, Eberle was had thrown two balls and no strikes to Skyler Ramos. Eberle walked two of the batters who were on.

OSU pitching coach John Bargfeldt made a visit to the circle, and Eberle then threw a strike and forced two fouls before Ramos grounded out to end the frame.

The Cowgirls opened the game’s scoring in the bottom of that inning when Michaela Richbourg doubled to right-center to score Chelsea Alexander.

OSU and ISU will continue their series at 6 p.m. Friday.