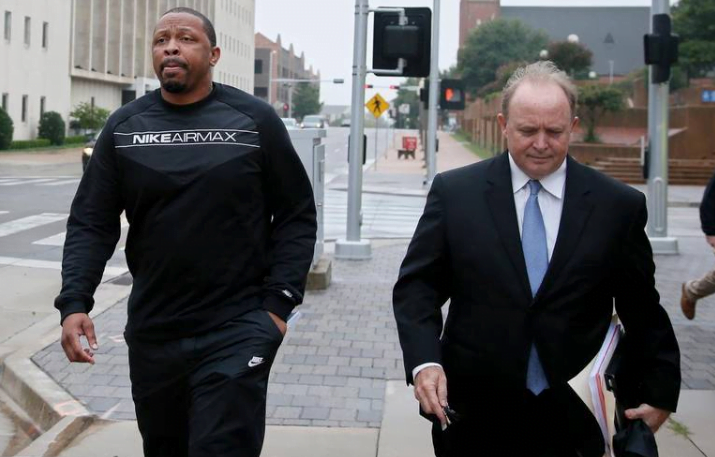 Former Oklahoma State assistant and Mike Boynton’s old right-hand man, Lamont Evans, is slated to be sentenced on Friday in New York City after pleading guilty earlier in 2019 to a conspiracy offense.

I don’t know what a conspiracy offense is, but I’m guessing it’s not a thing Mike Yurcich used to push Taylor Cornelius into one of the more impressive OSU seasons by a quarterback in recent memory.

He admitted to accepting bribes to steer elite players at OSU and the University of South Carolina toward certain advisers representing pro athletes. He already has agreed to forfeit to the government $22,000 he made from the scheme.

“Mr. Evans ascended from a mere student assistant earning no income to one step away from a head coaching position at a major Division I college basketball program,” his attorneys told U.S. District Judge Edgardo Ramos. “It is unlikely that he will ever be able to fully rebuild.

“Currently, Mr. Evans is … a laborer at a lawn care company in Deerfield Beach, Florida. Mr. Evans already has lost his employment, his reputation and is facing possible deportation, incarceration will not further the interest of judgment,” the attorneys wrote in a sentencing memo. [Oklahoman]

The part that kills me about all of this? The dude was set to make $600,000 at OSU, and he tossed it all away for (allegedly) less than 5 percent of that.

Maybe there’s more to it than that, and certainly I know the allure of power and control can be as enticing as the money itself, but that’s a heavy cost to pay (literally) for so little benefit.

Prosecutors are apparently seeking a two-year prison sentence for Evans, which it seems he is unlikely to get (more on that in a second).

Evans asked one financial adviser, who was secretly cooperating with the government, to give him extra money to provide to high school prospects he was recruiting to OSU, prosecutors revealed. [Oklahoman]

“Lamont is a good and decent man who made some unwise choices,” Griffin wrote about his friend in a May 17 letter to the judge. [Oklahoman]

So there’s a lot going on here. Ultimately, I don’t think Evans will go to jail, and the primary reason I think that is because of the precedent that was set on Wednesday in the case of former USC assistant Tony Bland.

Here are the details from his case.

Bland had entered a guilty plea to a felony count of conspiracy to commit bribery, admitting to accepting $4,100.

Prosecutors had sought a prison sentence of up to one year, but U.S. District Judge Edgardo Ramos instead agreed to the request for probation made by Bland’s attorneys. Bland admitted to taking the bribe in exchange for steering USC players to hire a specific management company as professionals. [KFGO]

While they aren’t identical to Evans’, they’re similar enough that you could envision the outcomes being the same. Who knows though. Three more sentences are set to be doled out, and maybe Evans is the first of those to go to jail. Maybe he’s the only one.

We’ll know more on Friday as this news plays out.