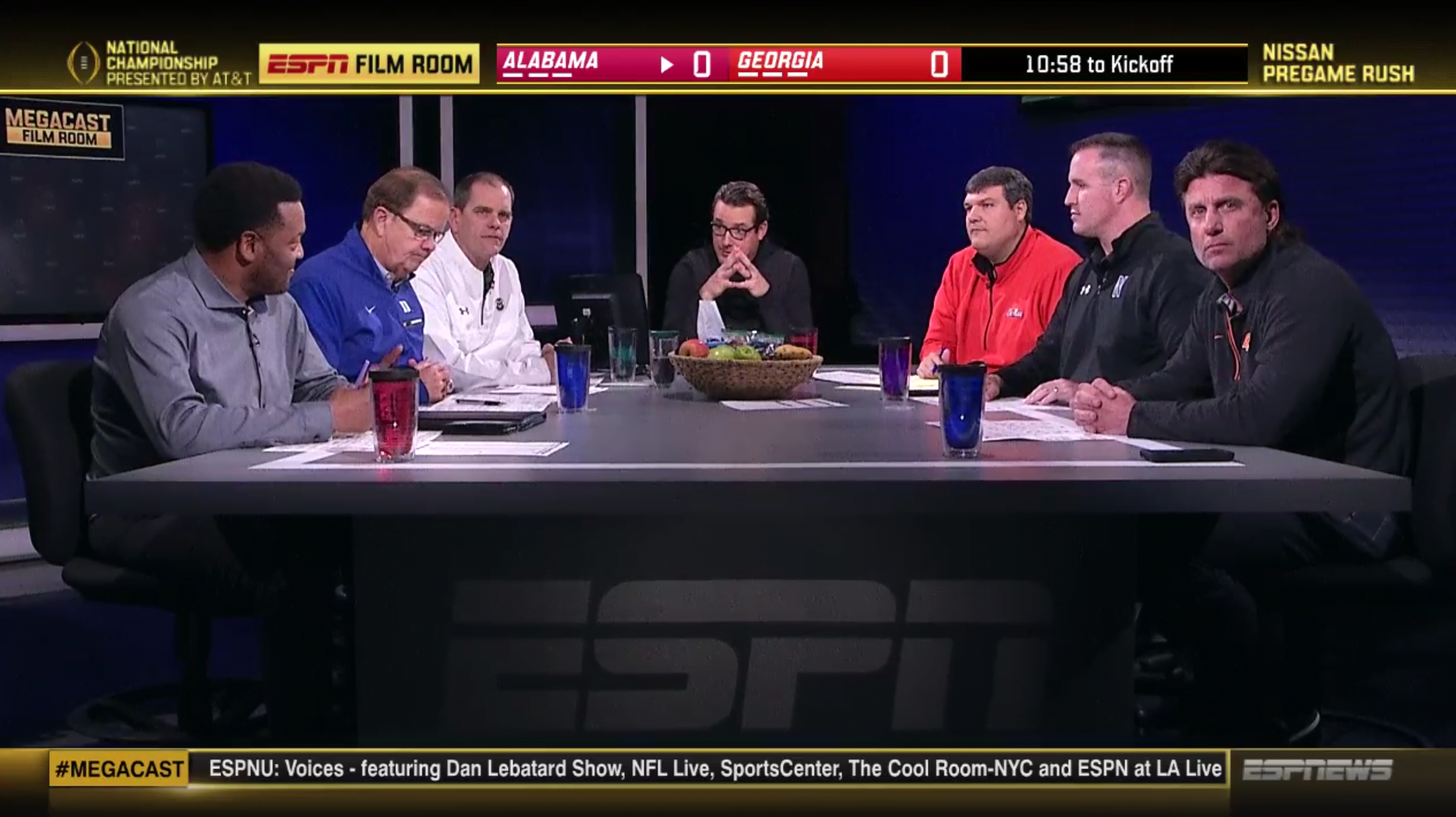 I’m here all night on Mike Gundy watch as he joins Kevin Sumlin, Matt Luke, Pat Fitzgerald, David Cutcliffe and others to talk about the Alabama-Georgia national championship as it’s being played.

• First thing Gundy does is find the camera and stare into it like he’s on The Office as the other coaches are starting.

• You know he’s angry that they didn’t let him wear his Carhartt jacket and drink from his Yeti on the air. Biased liberal media!

• He went over what he’s telling his team in the final moments leading up to kickoff. Special teams stuff. Which … well.

• Sumlin joked that you have to make sure you have 11 players on the field. Gundy: “You gotta have somebody countin’!”

• Bowl officials let them play, Gundy said. If you need to hold a little hit, you hold a little bit. Embracing his role at the table as the one who takes him self least seriously.

• Gundy is talking to the coaches like they don’t know how football works. It’s great. He thinks he’s the color commentator.

• I love that he’s staring at the screen like all he’s focused on is stealing plays to use for OSU in the future.

• Gundy is praising all of Alabama’s “safe plays.”

• I just took a break for dinner so I missed, what, a first down or two?

“Sony’s are nice but I got Justice.” #okstate pic.twitter.com/rPu4a9dX2e

• He said Georgia needs the hand the ball off right here. Zero gain. That’s the end of the first quarter.

• “Kicker’s really good, right? … So kicker’s a good player, been successful. Third and long, take the 3 points. Keep your momentum. Now your total yards, you’re ahead of Alabama now.”

• Someone brought Gundy a cup he thanked them and commented that he liked that it was orange.

With 20 different productions for tonight’s game on a variety of different channels… I am disappointed ESPN does not have a channel solely dedicated to Mike Gundy’s glorious hair. #ArkansasWaterfall #Megacast pic.twitter.com/rKrg65tX5m

They’ve got Pat Fitzgerald siting next to Gundy on the Film Room and there could not be more different hair cut philosophies.

• Gundy opining on how difficult it is to gain 1 yard in a game and to score on 1st and goal from the 10. “The issue for us is your RPOs are different (next to the end zone).”

• He’s getting inside Saban’s headset talking about how Bama is probably saying they haven’t played good but are still within a TD.

• He’s talking about how much you “have to love” Georgia’s right side picking up a twist rush from Alabama. Also likes the true freshman QB.

• It’s kind of sad how intriguing it is to watch Mike Gundy watch football. Not talk about but watch.

• Georgia is driving on Bama to end the first half. Gundy: “I’m going to run a draw again.” Haha, perfect. He’s pleading with Georgia to run it. This is amazing.

• Gundy praising Yurcich. “We’re a lot better with me out of (calling plays).” He said you have to watch eight hours of film a day to be a good play-caller.

Gundy on why he stopped calling plays. pic.twitter.com/9DM8cneEhg

• Now telling their coaches what to say at halftime. “We’re Alabama.” Built for this.

• Pumping up OU now, talking about how many points and yards they put on Georgia last week.

• This was awesome. And he’s right.

This is the most subtle way Mike Gundy can say SEC offenses stink compared to the Big 12. #okstate pic.twitter.com/Aptvq9t23t

• He said Georgia is in pass defense but Alabama isn’t running the ball. He also talked about one of the teams (I can’t remember) getting “out of their box.”

• I wonder what Gundy is thinking watching two true freshmen playing QB in the title game.

• He said “3” is “feeling it” a little bit. Also known as Roquan Smith, probably the best player on the field.

1. Cutcliffe (they all defer to him, plus he flat roasted a couple of players for effort)
2. Gundy (very sharp)
3. Fitzgerald
4. Bobo (some good O stuff)
5. Sumlin (subdued tonight)
6. Luke (scheme heavy early, then got quieter – still solid)

• Gundy looks like he has panic in his eyes when the room is asked whether they would stay with the backup QB or go back to the starter if they’re Bama.

• Said Tua should have thrown a deep pass he missed Ridley on to the corner and put some air under it because there wasn’t a safety back there. Good stuff.

• “Mark that one down” when Tua scrambles for a first down on 3rd down. Talking momentum, getting into it!

• Gundy has said “you know what’s interesting” about 399 times.

• Him breaking down whether Georgia was out of bounds on their TD to make it 20-7 was amazing. He insisted that if you kick somebody when they’re out of bounds, it makes you out of bounds, too. Nobody was really responding to him.

Big 12 refs would have been reviewing that until Wednesday ..

The most surprising part of the National Championship game has been finding out that Mike Gundy prefers Crown over Wild Turkey https://t.co/s4GKnAUQO5

• After the Georgia INT: “Of course we are all now, but I’m for spreading it out and running it.” Said “mark that one down” again.

Gundy checks to see where the safeties are before ordering breakfast.

• Gundy said Alabama should be encouraged with all the “one-high” Georgia is playing. Insinuated before that if Georgia went two-high, Bama might not be built to come back.

• I love the silence from every coach when they see Saban chewing somebody out.

• Gundy said some variation of “got numbers to run the ball” a LOT.

• I think an animal died to make Gundy’s belt.

How many of the guys in the coaches room have turned down Tennessee?

• Gundy keeps saying “six-man box” over and over. It’s late. 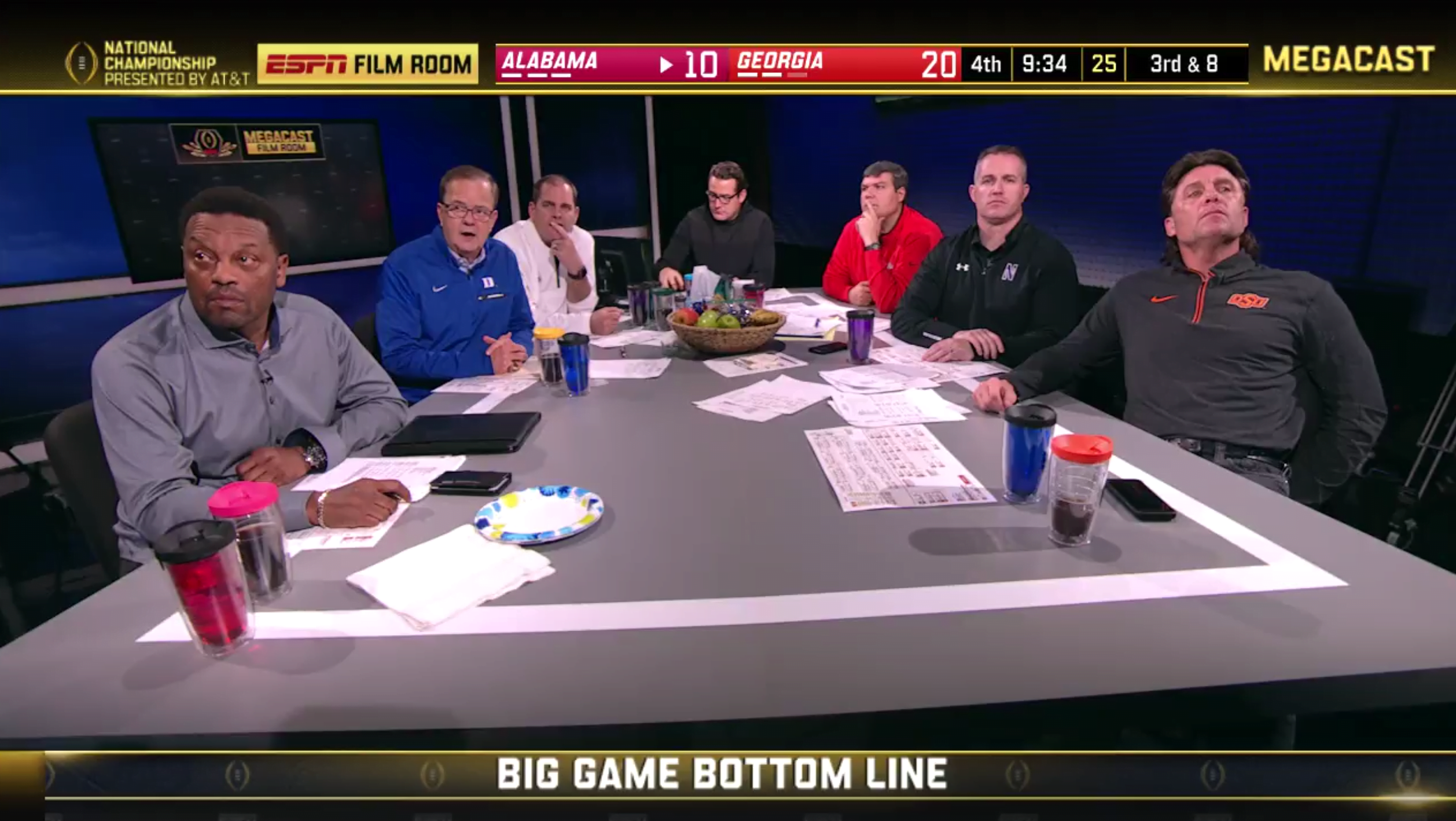 • Cutcliffe and Gundy talking about how you have to have QBs who can read pre-snap defenses and post-snap defenses and how beneficial it is to catch the snap without looking at it. Gundy compared it to having a good middle infielder who can get rid of it.

I would love to hear Gundy on the broadcast say something like "These are two programs you can win at in the SEC, can't do that at Tennessee."

• I’m sure Gundy approves of Bama playing Jalen Hurts all year with Tua on the bench.

• Gundy just keeps saying “run the ball … run the ball” with Bama driving for the title. It’s so great. Now he’s saying “I’m centering the ball here” on 3rd down on Georgia’s 25. Bama ran for the first down.

• Gundy said “he’s trying” about the Bama kicker that missed the FG to win it. Said he needed to recover quickly to help Bama in OT.

• Bama won it in OT and Gundy reacted like he was watching a spring game. Then he mentioned a QB controversy and said Bama has two guys now. Perfect ending. Eight-month offseason, here we come.

• Gundy’s biggest takeaway: “Next guy has to be ready.”