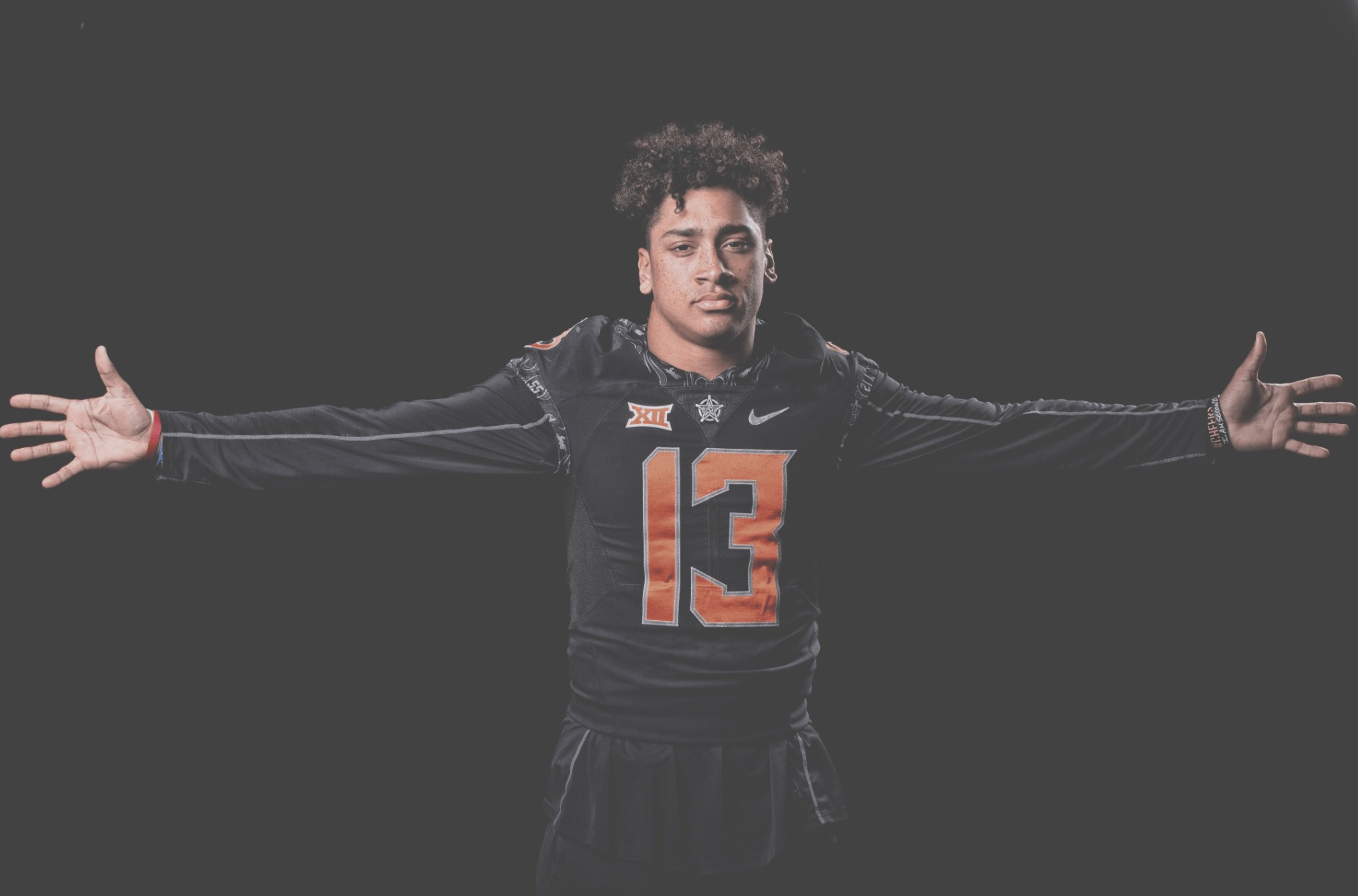 Today marks the beginning of the first Early Signing Period for college football. It lasts 72 hours and will close on Friday December 22. The majority of Oklahoma State’s class is expected to sign on Wednesday.

So bookmark this page and check back frequently for updates. We’ll keep you abreast of all the signings as they become official, any surprises and what you need to know about the next wave of Cowboys that will call Stillwater home.

Spencer Sanders is first, which is fitting. The 4-star QB is Oklahoma State’s second-highest rated prospect and was the first to commit back in 2016. He hasn’t wavered from that commitment, and now he has a chance to become OSU’s first true freshman starter since Wes Lunt did it back in 2012.

The first NLI has arrived and it's from the Texas Gatorade Player of the Year, Spencer Sanders! Welcome to the #okstate family! https://t.co/MvHUeZtSn0 pic.twitter.com/LYKm25TUuS

Athlete Gabe Lemons signs next. Lemons is the lowest-ranked player in this year’s class so far, which is remarkable because he’s a pretty solid defensive player who should play corner behind A.J. Green and Co.

The first of many Josh Henson recruits has signed. Jacob Farrell inked his name third in OSU’s class, and Farrell should be a nice part of OSU’s Big Daddies™ up front for years to come. He had offers from Texas Tech, TCU and Kansas.

OSU’s only tight end (Cowboy Back?) in this class is Jake Ross, and he comes from NEO. This is a position where OSU could use some depth, and Ross should be able to provide it.

Tyler Lacy is somebody I’m pretty excited about. He’s a 6’4 DE who looks like he could be a monster with a few years in #BodyByGlass. OSU did not score big on the defensive line front in this class, but Lacy should be a nice player over the next several years.

Jarrick Bernard is a little bit of an unknown as he goes to a small Christian school in Louisiana and doesn’t appear to have had any other offers. Still, he’s a nice piece to Dan Hammerschmidt’s puzzle as he tries to replace Tre Flowers and Ramon Richards.

The most recent addition to OSU’s class, made his pledge as soon as an offer was extended on Tuesday. The defensive end/outside linebacker fills a hole left after a 12th hour flip by Millwood defensive tackle Israel Antwine to Colorado, but OSU has been in on Cassity for some time.

Speaking of safeties, Kanion Williams is also now officially in the fold. The 3-star from south Dallas had offers from Arizona, Arizona State and Houston.

Tanner McCalister is a talented playmaker who is ready for to compete for a spot in Oklahoma State’s thin cornerback rotation — probably immediately from a physical standpoint. OSU’s coaching staff made luring experienced cover men a priority in this class and they got a good one in McCalister.

The crown jewel of OSU’s class, CJ Moore, is officially in the mix now, too. Moore is the 13th-highest ranked recruit in Oklahoma State history (although the second-highest ranked person named “Moore”). He will slot in nicely with the Tyron Johnsons and Dillon Stoners of college football, and he turned down offers from Alabama, Auburn, Georgia, Ohio State and Texas.

Blake Barron was the second commitment of OSU’s class after QB Spencer Sanders. The coaching staff was in on him early and liked where he was as a cerebral defender at the prep level. He’s shown good closing speed, but quicker instincts. Barron adds needed depth to the Cowboys’ linebacker corps.

Another letter is in and it's from Blake Barron out of Rockwall, Texas! #okstate https://t.co/UCcvb4ZEBW pic.twitter.com/32kFrdh05s

JayVeon Cardwell is the fifth-highest ranked recruit in this year’s class, and I think the true freshman corner will have a decent chance to play as a freshman behind Green and Rodarius Williams. He’s from the same high school as the Sterns bros and turned down offers from Duke, Ole Miss and Vanderbilt to come to Stillwater.

Josh Henson hit the recruiting trail with a bang immediately after assuming OSU’s vacated OL coach position — and he showed he was not afraid to go outside the box (or OSU’s normal stomping grounds) snagging this behemoth.

In Woodard, OSU gets a tough tackle used to bullying the competition but with the skills to carry him at the next level. The Cowboys should be set at tackle in 2018 but of all the OL signees, Woodard may be the closest to being ready to contribute.

All the Hunters. Hunter Anthony is the lowest-ranked of Henson’s big batch of linemen, but he’s still a top 20 player in the state of Oklahoma (No. 17). Anthony comes from Henson’s home town of Tuttle, and at 6’7, 320 lbs., might go down as the steal of this class.

Kolby Peel represents safety No. 3 in this class, although with his size I could see him moving to linebacker or the Star position at some point. He’s on the border of being a top 100 player in Texas, which means he would be a top 10 player in Oklahoma. ?

Oklahoma State adds junior college defensive end Michael Scott, who was obviously tired of The Office jokes and decided to go by “Mike”. But what this experienced edge rusher brings to the Cowboys is no laughing matter. He showed quick get-off speed, a nose for the QB and a violent streak at the junior college level.

Scott provides depth and will help fill the holes of departing ends Vili Leveni and Tralund Webber. If he can make a quick transition to the D-I level, he could be a surprise contributor next fall.

OSU welcomes in-state safety, Jason Taylor II from Carl Albert High School to add depth at a place of need. Tre Flowers, Ramon Richards, Jerel Morrow and Darius Curry are all on their way out the door. Taylor II is an under-the-radar prospect who also held offers from Memphis and Tulsa but picked the Pokes instead.

A late (and massive) addition to the OSU class, Mike Gundy and Co. flipped Flanagan from Arkansas after Bret Bielema got canned in Fayetteville. Flanagan is OSU’s highest-ranked recruit behind Moore and Sanders. He’s a 6’1 athlete who was the No. 3 player in the state of Arkansas and should play defensive back for the Pokes.

Josh Henson basically signed an entire OL rotation in his first class, including a nice pickup in Bixby guard Bryce Bray. Bray spurned five other offers including Oklahoma’s to add depth to OSU’s rebuilding line. Bray is the highest-rated lineman of OSU’s class and should be a beast up front in the not so distant future.

Oklahoma State’s only running back in the 2018 class (maybe?) has a chance to be a good one. Jeter turned down SMU and Texas A&M to come to Stillwater. He’s a bigger back with a long stride who runs downhill and gives the Pokes a glorious embarrassment of depth at the RB position over the next few years.

Big Tyrese is maybe the most thoughtful recruit in this year’s class and will be a fan favorite for several years in the same way Brad Lundblade has been for the last few. He’s a top 100 player in Texas and the second-highest ranked lineman in this class.

Kasey Dunn signs two of the top four players in this class, takes a long puff on a monster cigar and emails Mike Holder for a raise* Moore is (obviously) the biggest name and player in this class, but Shepherd might be the most overlooked player of the group. Don’t be surprised to see Sanders tossing deep to these two over the next four years.