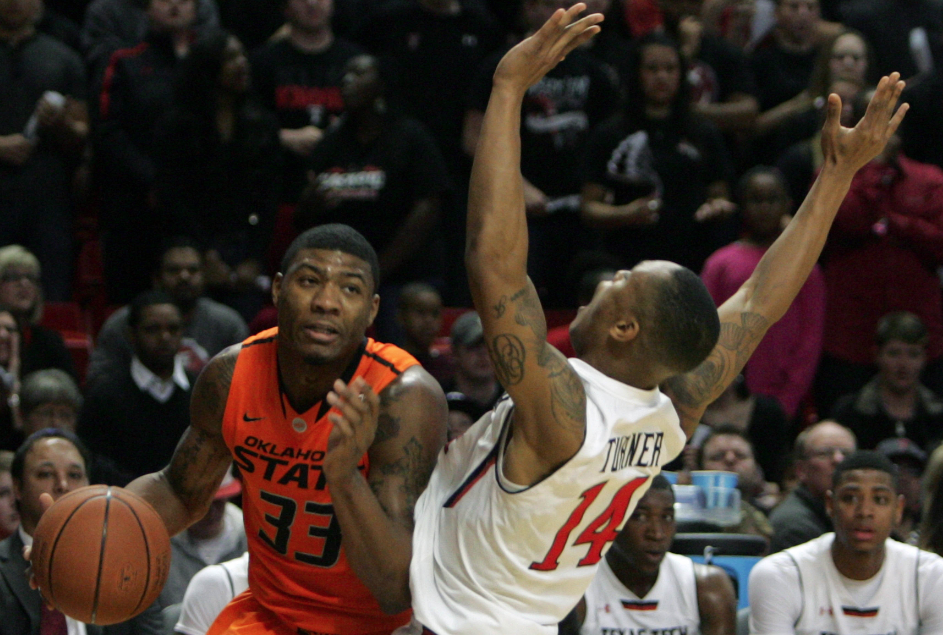 Marcus Smart has been suspended for three games — at Texas, OU at home, and at Baylor — in a joint decision by OSU and the Big 12. He won’t travel with the team which means our first three guys off the bench are now Gaskins, Hammonds, and Soucek. Yikes.

Smart stood up on the podium and apologized to a number of people on Sunday evening.

Exactly what he needed to say. Even thought Orr released a statement and said all he did last night was call Marcus “a piece of crap” but that he’s voluntarily not attending any more Tech home or away games this season. OK, right.

Anyway, Travis Ford stepped to the podium next and honestly I thought he was going to cry. It was almost bizarre, whiny even. He noted that last night was bad but it was almost like he was trying the whole time to convince everyone of how great of a person Marcus actually is.

“I know Marcus Smart. I’ve been around him pretty much on a daily basis for two years, and undoubtedly, no question, was not one of his finer moments,” Ford said. “But Marcus Smart has had many great moments as a person, as a player, and I know Marcus Smart’s heart. I know how he’s hurting. I know how regretful he is right not. Those are the things that make me love Marcus Smart. Marcus knows he made a big mistake last night.”

“The majority of the time, the highest percentage of the time, he’s conducted himself as a tremendous young man. But he’s made a mistake. … I am very confident, extremely confident, because I do know Marcus Smart, when he comes back … he’s going to gain everybody else’s trust that he’s lost. … Marcus has my full support. Unwaivering support.”

Well that’s great and all but it honestly felt like Ford was talking about his superior, a boss, and not a 19-year-old he’s in charge of teaching things to. Somebody on Twitter mentioned that it was almost like TO talking about Tony Romo. That’s my point guard.

After Ford did his thing Holder stepped to the table and just started crushing. I’ll post his comments when the video is put online but he was just spectacular. He talked about how college is when you’re supposed to learn and grow. He also dropped this jewel:

“Smart has a big valentine beating in his chest. Let’s not crucify him for this.”

A lot of his comments will look the same on paper as what Ford said but until you see the video it’s hard to describe how much more commanding Holder was — of the moment, of the situation, of the room, of everything. He led, thankfully.

Because somebody needed to.

The suspension is fair. I thought it might be fewer than three but it’s absolutely fair. And Holder was immense. He made me forget how weird Ford seemed. Not addressing what was actually said was probably the right call because you don’t want that to hang over the incident. Because it’s not on tape it turns into he said-he said and that’s never a good scenario for anyone.

Near the end of his chat Holder said something that I’m pretty sure Ford has never said during his entire tenure in Stillwater. It’s something that I think Holder truly believes and something Ford better start believing if he enjoys coaching Big 12 basketball. Something that made me proud of the press conference and proud of Holder, for all his shortcomings, as a leader.

“Talk is cheap, the proof is in the pudding.”