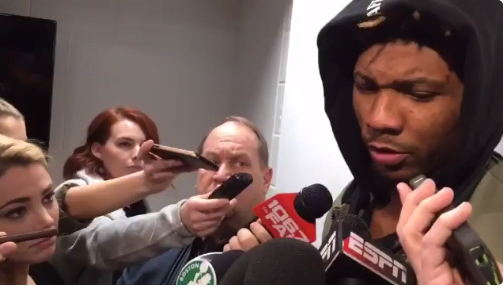 During the Boston Celtics’ 123-108 loss to the Washington Wizards former Oklahoma State guard Marcus Smart got into a heated argument with Celtics assistant coaches on the bench.

Head coach Brad Stevens sent Smart to the bench towards the end of the game. When Smart got upset — apparently due to Stevens not putting him back in the game — an argument took place between Smart and assistant coaches on the bench, with Smart eventually being sent to the locker room.

Marcus Smart emotionally upset after not getting subbed in at the end of tonight’s loss to the Wizards pic.twitter.com/QowzaPoJ4N

Smart said the incident was a difference of opinion, “[It was] just coaches and players. They are real passionate about the game and hate losing, having a different opinion about certain things in the game.”

Marcus Smart on the altercation with an assistant on the bench. #Celtics pic.twitter.com/x5tKYLLEW0

To my teammates and coaches… pic.twitter.com/6HtN3FWb8Y